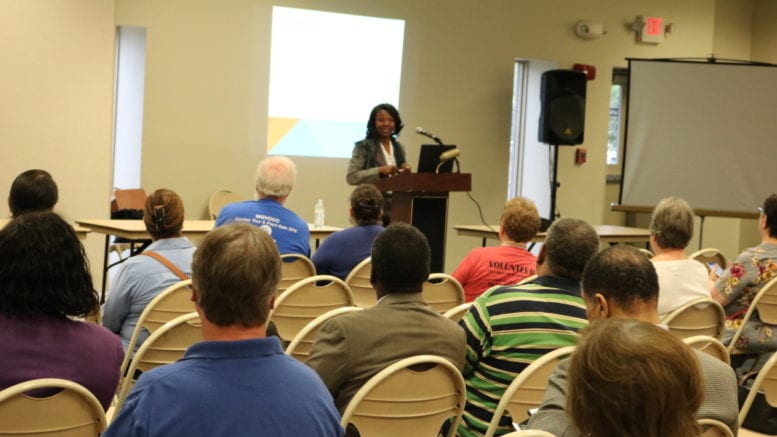 At a public meeting at the Ron Anderson Recreation Center in Powder Springs on Tuesday evening, Cobb County District 4 Commissioner Lisa Cupid delivered a “State of the District” address, outlining what she saw as the accomplishments, opportunities and challenges for the district. She also stated that Cobb’s budget problems make a tax increase necessary if the county’s services are even going to continue at the same level they are now.

She asked the audience, “What is our dominant industry in our district?”  Then she answered the question.

“Healthcare.  And you wouldn’t think that by the way that South Cobb is advertised, or the way that the possibility of district 4 development is shared with investors. You would think that we are primarily an industrial community, that all we did was move trucks and goods all day. But in reaching out to the ARC, they share data that health care is indeed our number one industry in the district, and I think that really helps to change the substance of our conversation about what the possibilities are here.”

Cupid said the next largest sector in the district was educational services, and after that manufacturing.  She mentioned several large employers in the area: FedEx, Yancey Brothers, WellStar, and Six Flags.

She said healthcare was also the fastest-growing employment sector in the district, so if people in the audience knew anyone seeking career opportunities, that might be a good avenue to consider.  Not only are jobs available in healthcare, but it’s one of the highest-paying sectors for the district, she said.

Travel and tourism is Cobb County’s number one industry, she said, and Six Flags and a portion of the Silver Comet Trail are in district 4. She also highlighted the Mable House complex and the Girl Scout campground of over 200 acres as travel and tourism assets.

Cupid invited Jo Lahmon of the Cobb County Public Library to talk about programs available in South Cobb through the public library system. 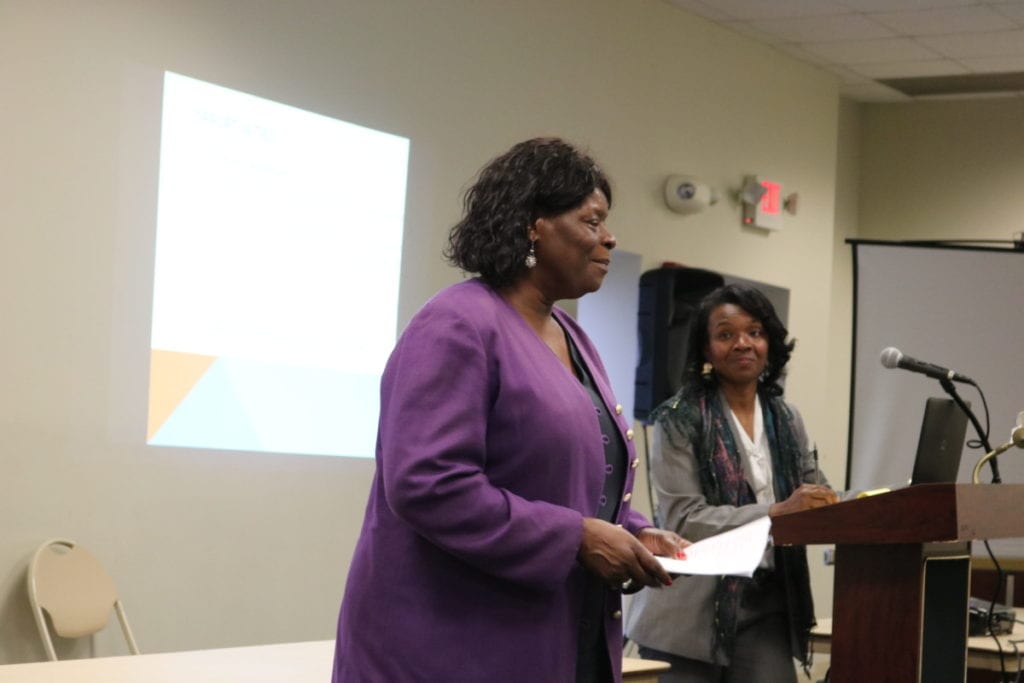 Cupid welcomed Cobb County Police Chief Michael Register, and his wife Keisha Register, who were in the audience.  She then talked about policing in the area.  She said community affairs officers had been hired to promote community policing. A precinct community advisory board has been set up to improve communications between police the community.

She said she has several proposals related to policing that she would like the community to support.

“The purchasing of body cameras should be spread throughout the entire organization. Right now a lot of our officers don’t have them.  I think that there’s opportunity also to utilize technology to curtail crime, and I appreciate the amount of research that’s going into seeing what we can do to reduce our cost, but still be creative in how we can address crime.  Plus, I have to put out there, Chief, adding a mini-precinct to district 4, particularly for our high-crime beat, the 215 beat in the Six Flags area that’s the highest-crime beat for all of South Cobb,” she said.

“And I think one thing that I have to share is that there continue to be ongoing concerns regarding race and policing.  We were fortunate to have a meeting with our residents and our police chief.  We met with members of the DA’s office about an incident that occurred.  And while we wanted to address the incident, the issue of race just kept coming up.  And we wanted to separate the incident, but because the issue of race still just hasn’t been addressed completely, it was hard to separate the two.  So I just think we have some opportunity there, to take a deeper dive and to address that so that we do not diminish support for public safety, even though there tends to be a disproportionate level of concern in issues with police and those of color.”

She gave a summary of some of the road projects going on across the district, and the need for sidewalks.  While talking about sidewalks she asked a Cobb DOT representative who was in the back of the room to tell the audience how much sidewalks cost per mile.  The DOT representative gave a figure of over $1 million per mile.  Cupid said that even though sidewalks were a need in the district, they were also very expensive.

Cupid highlighted the discussions about public transit in Cobb County that have increased since the state passed legislation to set up Atlanta Transit Link, or ATL, the new region-wide transportation agency.  She said a study had found that most Cobb County residents who take public transit do so to get to work, and the next largest number are traveling to school.

Cupid said that a millage rate increase is necessary to keep the county going even at the current level of services.

“It has been my observation that we try to provide Lexis-type services on Pinto rates here in Cobb County,” she said. “As some people have told me there are some people who think that Cobb County must be Disneyland.  That you just come here and we provide great services, we just have fun with it.  But it takes money to do that.  It takes money to be responsive.  It takes money to create what you’ve come to know as one of the finest counties in our state.  And as Cobb County continues to be an attractive place and grow, our needs change.  The people here change.  We were at one time a sleepy bedroom community.  We have the Braves here now.  We’re almost an urban community.  A lot of the zoning we’ve been developing over the past few months has been for mixed-use communities, multi-family communities, condos, townhomes … Cobb County is changing.  But what has not changed is how we invest in Cobb County.  And we cannot continue to invest in the Cobb County of yesterday.”

She said that some of the expenses that are growing for the county include health care, the pensions of past employees, county vehicle maintenance, and the efforts to unify the record-keeping in the court system.

She said that ideally, she would like a 3 mill increase, but that realistically a 2 mill increase would keep the county from having to come to residents for another increase soon afterward to continue to provide services, and asking for a 2 mill increase is more politically feasible.

Cobb Teachers Receive Raise; No Change to Compensation for Substitutes

Cobb residents: December 1 is the deadline to fill out the online MSPLOST survey