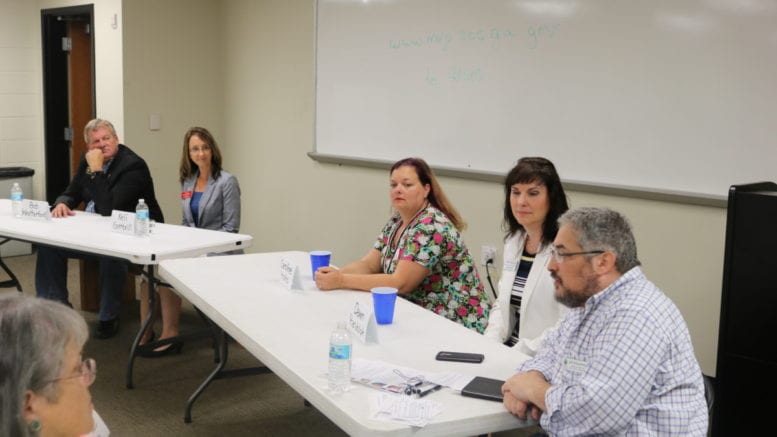 This is part 2 of our article on the Sierra Club Centennial Group’s Meet the Candidates forum.  This part includes three candidates for the Cobb County Board of Commissioners.  The final installment in the series will feature Dawn Randolph, the candidate for Public Service Commission who spoke at the forum.

Cobb County Board of Commissioners Candidates

Three candidates for the Cobb County Board of Commissioners spoke to the Sierra Club’s Centennial group on Thursday, July 5.

>> Read part one of the series by following this link

Moderator Jeff Schoenberg asked the candidates to tell the audience who they are, and why they decided to run in 2018.

Caroline Holko is a Democratic candidate challenging Republican incumbent JoAnn Birrell for the District 3 post. She said, “I’m originally from New Orleans, and I bought a house in East Cobb in 2008. We were attracted to East Cobb by the reputation of excellent services, good schools … and now I am running for the seat in District 3 because the entire time that I have lived in East Cobb I have never once seen anything other than a blank spot on that race. Just constantly incumbent after incumbent.”

She said the final straw was when a wooded lot in her neighborhood was razed for three “McMansions.” “It’s probably been two years since I’ve seen a bunny rabbit in my neighborhood,” she said.

She said Essence Johnson, a candidate for state House of Representatives, encouraged her to run, and that more women, particularly liberal women, should be running for office.

She said, “One of my first jobs in college was canvassing for the Sierra Club in New Orleans.  Knocking on doors and asking people to give me money.”

Kelly Gambrill is challenging one-term incumbent Bob Weatherford for the District 1 seat.  She and Weatherford are in a run-off election on July 24.  Since no Democratic candidate ran in the primary, whoever wins the run-off will serve on the BOC.

“We moved here in 2003 and asked what could be built behind our home.  We were told, and then in 2005 a yellow zoning sign went up, and instead of one house we were going to have thirteen.  That essentially got myself and my neighborhood involved, We made compromises, and agreements, and then development began and they were broken.  When development started my yard turned into a lake … things that were supposed to be happening weren’t, so I became involved, and essentially got up in front of the board every public speaking hearing opportunity to say ‘Hey!  You said you were going to do this … this is what’s happening .. fix it!'” she said.

She became president of People Looking After Neighborhoods (P.L.A.N.) and was involved in advocacy involving Cobb’s 2030 and 2040 Comprehensive Plans, which set land use and zoning strategies for the county.

Bob Weatherford said, “About four years ago I was here in front of the Executive Board (answering questions) and was honored to get the endorsement of the Sierra Club and also their help in phone banks … You truly are non-partisan.”

“It’s difficult to provide as a county the different things that we have to provide.  Until you get there you don’t quite understand it.  I came from city government where I was Mayor Pro Tem of Acworth for years.  We didn’t have to worry about the sheriff, the constitutional offices, the judges and the tax commissioner.  The county has to provide a budget for all those elected constitutional offices.  And most citizens don’t understand that, that 40 percent of our budget is taken away immediately and is given to those constitutionally mandated offices,” he said.

Schoenberg said that the parks bond had been a priority of the Sierra Club in Cobb County for a very long time, and asked what would be done to address the $12.5 million shortfall from the original bond resolution.

Holko said, Holko,  “Obviously it should be made a priority as soon as possible, and it’s a little strange to me that it hasn’t already been done.  It’s my understanding that the park bond was approved quite some time ago. The purchase of the Tritt property is a pretty good step towards the fulfilling that promise.  As far as park bonds I understand that it’s getting pretty difficult, especially out in East Cobb, it’s getting very developed.  It might be difficult to find one single large parcel of land, but maybe a park space doesn’t have to be this developed sports park, with a playground, and pavement.  Maybe parks can just be undeveloped land.”

“That one has been fulfilled.  The 2008 parks bond is more for greenspace. So as far as the further development of that, there are no plans right now for that. The question will be will it come forward in a future SPLOST.  That’s uncertain, because again, that parks bond has different language than the ’06 one, so it’s more greenspace.  Again it’s going to go back down to taxpayer dollars moving forward to turn those parks into something more than trees and shade.  As far as money, my understanding is there’s language in the ’08 parks bond that is preventing us from fully funding it to the $40 million level,” she said.

Weatherford said “I think the original question was what are we going to do about the $12 million, and there will be nothing done about the $12 million in this particular bond because legally we can’t do anything but what we’ve already done, It’s $24 million. $24 million because our bond rating is so great no one would buy the bond from the county.  And we were offered a premium, so that gave us $27 million in order to get the bond. ”

“One of the hardest things that I’ve done in my career is try to buy land … People got greedy when you started offering them money, and we can only offer them what it’s appraised at.”

He said he supports buying land for greenspace.

Schoenberg asked the candidates to make a simple declarative statement on the best route for figuring out what Cobb County needs in terms of transit.

Gambrill said, “First it needs to come to the people for a vote. I think that’s critical that people that people need to have a vote and say yes we want to go forward with this or no we don’t. If we go forward I would like to use the existing resources that we already have.  We already have rail lines that take us into Atlanta and Buckhead. Can we put some type of transit there? Find out if it’ll be utilized, how successful it will be, and then build from there.”

Holko said, “Put at its most basic, I would like to see transit expanded in Cobb County. I do agree with Keli that it has to be put to a referendum … So the first thing would be to get a referendum drafted and put on the ballot so that we exactly what people want.  And then make it happen.  Yeah, there’s existing rail lines, we have resources, there’s adequate technology … there’s no reason in the world why we shouldn’t already have transit.”

Weatherford said that House Bill 930 mandates a referendum. “The one provision for our part of House Bill 930 is that Cobb County has a seat at the table.  In other counties in the metro area, and there are 13 of them, the legislature does that, so the ones you need to talk to are the legislators who represent Cobb County.  We’re going to sit at the table and figure out what it is we need. We have the option in Cobb County to do special districts, such as Cumberland and South Cobb, or we have the option of doing the whole county.  Other places do not have that option,” he said. “We on the Board of Commissioners have influence, but we do not have the final say.”

He said the plan is to put a referendum on the ballot in 2019, and that a one percent sales tax would bring in about $30 million.

Schoenberg asked the candidates their positions on affordable housing.

Weatherford said, “That’s a very good question: there is none. We try as hard as we can, but as I mentioned earlier when we were buying parks land … it’s very difficult for anyone to build a home that’s affordable.  We’re trying to come up with a different zoning category that allows more density such as you have in cities, that we currently do not allow in the county, that will allow them to have denser housing, therefore affordable housing. Affordable housing now, believe it or not, is 250 (thousand dollars).  I’ve been here for four years, and I haven’t been able to afford anything I’ve approved.”

Holko said, “One of the keys to affordable housing is going to be transit, because obviously if people are struggling to meet their basic housing needs, they probably don’t have good access to reliable cars.  I drove so many terrible cars in college, that I’m an amateur mechanic.  Because that was the choice that I had to make. It was learn to fix the carburetor yourself, or don’t go anywhere.  So transit will help because there are some available pockets out in some of the fringes of the county, along the Cherokee border. But there could be partnerships with some of the new developments to encourage them (to provide a set-asides for affordable housing).”

Gambrill said, “We understand that there is a need for affordable housing .. but land is very expensive, and if you just start adding more density to it, land prices are just going to continue to rise. So how do we solve this problem?  … We’ve got empty buildings.  Right now we’re looking at giving a tax abatement to a Kroger.  Well, why not encourage a developer to come in and turn that shopping center into an affordable housing facility?  We’ve got fire stations that are empty.  Yes, it might take some creative engineering, but could we change that into a little 3-4 bedroom condo unit, and then specifically target it for our firefighters, our public safety members in our community.  We just need to get creative.”

[The third and last part of this series will feature PSC candidate Dawn Randolph.]