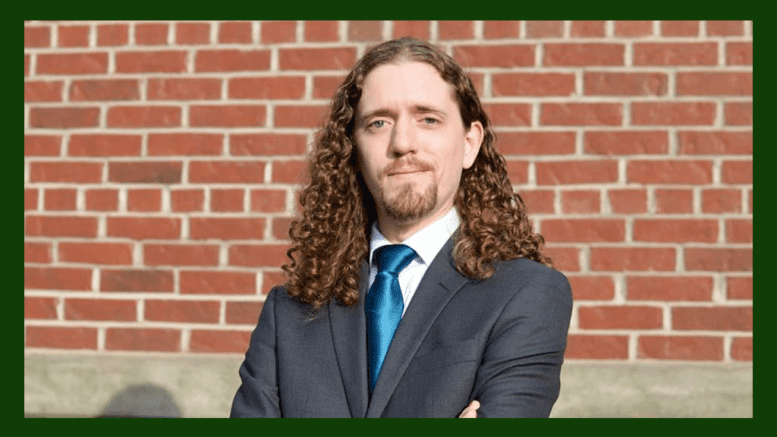 Matt Southwell has always followed politics, but in early 2016 he was inspired by what he describes as a “cantankerous old man from Vermont” — Bernie Sanders to the rest of us — to get more involved.

From there, Southwell became a campaign field director, president of the Young Democrats of Cobb County and now the Democratic candidate for Georgia House District 34. He still follows Sanders closely, even slipping into a Bernie impression at times, but now aims to become a politician in his own right.

“If voters really study the policies I’m proposing, such as multifaceted transit solutions and small business tax breaks, I think they’ll see I have a lot of common-sense solutions to problems affecting us every single day,” said Southwell, a technical analyst at Marietta-based Vertisys.

To win a seat in the Georgia General Assembly, Southwell will need to unseat attorney Bert Reeves (R – Marietta) in a conservative district encompassing most of Kennesaw west of I-75.

Reeves easily won re-election in 2016, collecting nearly 64 percent of the vote against challenger Justin Holsomback. And while both Reeves and Southwell ran unopposed in the May primaries, Reeves picked up 3,083 votes to Southwell’s 1,680, a potential indicator of support come November.

Southwell, 32, isn’t concerned. He said that it’s important for citizens to have a choice in a democracy, and feels he can connect with voters in the district, especially Kennesaw State University students.

“I believe that a healthy democracy requires that voters have a choice in their elections,” he said. “Letting incumbents run unopposed is antithetical to the concept.”

Southwell was born in Ocala, Florida, moving to Kennesaw in 1991 when his dad got a job in Atlanta. He was part of the first freshman class at Kennesaw Mountain High School, and attended Kennesaw State University to major in English, though he did not graduate. Instead, he said a lifelong passion for computers helped him land a career in information technology. He also has a young child, who splits time between his mother and Southwell.

Aside from the university, Kennesaw is known for an unenforced 1982 law requiring homeowners to own a gun. Southwell nonetheless supports legislation to raise the age limit to buy firearms to 21, with exceptions for military and law enforcement, and wants to close what he calls gun loopholes. He feels the city’s gun law isn’t indicative of today’s voters.

“(The gun law) isn’t a priority for me, and as a state legislator it’s not my job to tell the City of Kennesaw what to do,” he said. “It doesn’t have much of a direct impact.”

This stance puts him at odds with Reeves, as does the issue of what are known as religious freedom bills. Reeves voted in favor of HB 757 in 2016, a bill that was vetoed by Georgia Governor Nathan Deal. Southwell feels the bill would have legalized discrimination against the LGBT community and harmed Georgia’s economic growth.

“I am the ‘B’ in LGBT, so when Reeves voted for that bill, he voted against my rights,” said Southwell. “It’s important we elect people who will not put a bill like that on the governor’s desk.”

He also said Holsomback, the district’s 2016 Democratic challenger, suspended his campaign in early September, indicating he could have performed better had he continued courting votes. Southwell served as field director for Holsomback’s bid, and describes the district as “definitely flippable” due to its large contingent of KSU students.

“We’re going to be reaching out to voters in this district in every way we can,” he said. “There will be phone calls and mailers, people knocking door to door talking up the campaign. I’m looking forward to making sure students register vote and get out to the polls.”

Reminder: the House District 34 race is coming to a close soon