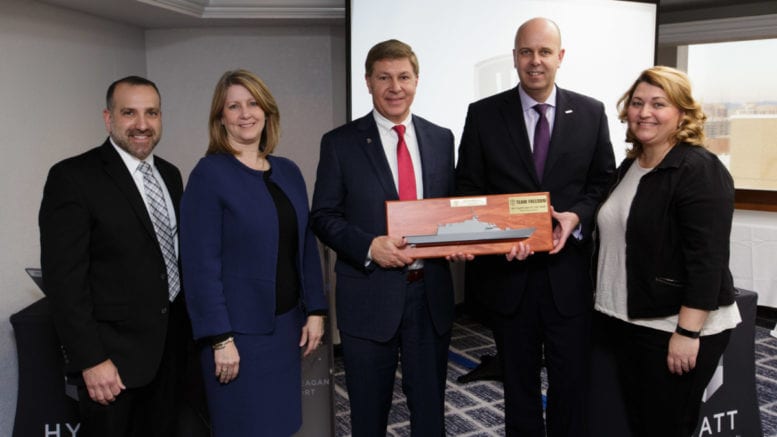 Michele Evans pictured second from left in this photo taken when Rolls Royce was named Team Freedom's 2017 Supplier of the Year at the Surface Navy Association Symposium on Jan. 9. Pictured (from left to right): Joe DePietro and Michele Evans of Lockheed Martin; Christopher Vaughan and Neil Pickard from Rolls-Royce; and Jan Allman of Fincantieri Marinette Marine (PRNewsfoto/Lockheed Martin)

He duties include the responsibility for the C-130, manufactured in Lockheed Martin’s Marietta facility.

Marillyn Hewson, the company’s chairperson, president and CEO, said in the press release announcing the appointment of Evans,  “I want to thank Orlando for his impressive contributions during his nearly 40 years with the company,” said . “During his outstanding career Orlando has led some of our most important lines of business and programs, helping to grow our company and our leadership position in the industry. Michele has led critical elements of our business, building an impressive record of leadership and strong customer relationships around the globe. Her appointment demonstrates the importance of our talent development and succession planning.”

Evans has more than 30 years of experience and was appointed deputy executive vice president for the Aeronautics business area in May of this year. She oversees all Aeronautics programs, which include the F-35, F-22, F-16, C-130 and Advanced Development Programs.

According to the press release, “Prior to that, she served as vice president and general manager for Integrated Warfare Systems and Sensors in Lockheed Martin’s Rotary and Mission Systems business area. In this role, she oversaw the strategy and execution of the Littoral Combat Ship program, Aegis Combat Systems and sea-based missile defense, as well as a host of other systems. The programs she led in this role supported all branches of the U.S. Armed Forces, and more than 40 countries. She also was vice president of Modernization and Sustainment, where she was responsible for the A-10 weapons system, and avionics programs on the C-130 and F-35.”

>> See our other coverage of Lockheed Martin here