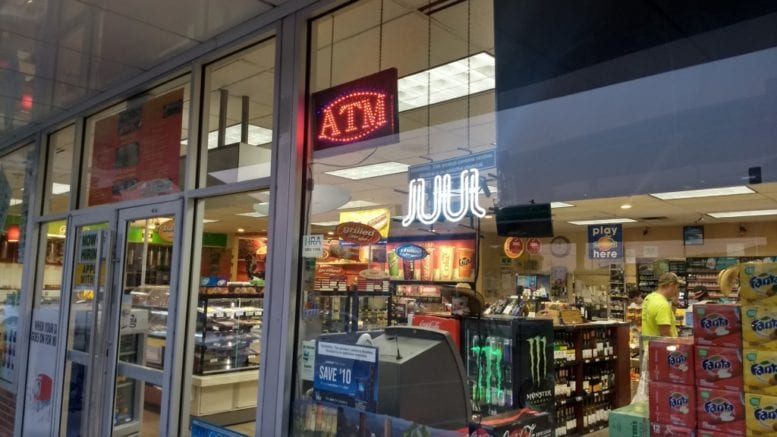 Neon sign for juul, the dominant brand of e-cigarette (photo by Haisten Willis)

Reacting to a rapid rise in youth smoking, the Smyrna city council voted unanimously Tuesday night to ban the sale of tobacco to anyone under the age of 21.

“The brains of young people are particularly susceptible to the addictive properties of nicotine,” said council member Tim Gould, the chief sponsor of the ordinance. “As a result, approximately three out of four teen smokers end up smoking into adulthood. Based upon the information given by local educators, the city recognizes that a significant percentage of under-aged e-cigarette users get them from peers who are under the age of 21.”

In calling for the ban, Gould listed a host of statistics about tobacco use and e-cigarettes in particular, including that one in four high school students has used tobacco and that e-cigarette use among high schools has increased 900 percent since 2011.

He said he had worked with area law enforcement, educators and medical professionals in crafting the policy. Language in the ordinance also said the the Institute of Medicine has predicted that raising the minimum legal sales age for tobacco products nationwide to 21 would result in 223,000 fewer premature deaths, 50,000 fewer deaths from lung cancer, and 4.2 million fewer years of life lost for those born between 2000 and 2019. It would also result in reductions in preterm birth, low birth weight and sudden infant death syndrome.

Smyrna is far from the only place raising the minimum purchase age for tobacco. There are now 18 states which have passed laws raising the age to 21. Several other council members also voiced their support of the city’s ban. Council member Maryline Blackburn called on the state legislature to issue a ban across Georgia.

“I look to the state to take the initiative further than what we’re doing, to level the playing field across the entire state so that everybody will understand the detriment that e-cigarettes and vaping are doing in our young community,” Blackburn said.

Council member Ron Fennel noted that his father is a long-time smoker, said he supports the ban in spite of holding Libertarian tendencies, and called for action reaching up to the federal level.

“I feel for the police department having to enforce certain components of the law that have some ambiguity at the local, state and federal level,” said Fennel. “Hopefully the jurisdictions beyond this council can speak to those issues clearly and quickly.”

Smyrna’s ban takes place Jan 1., 2020, and is only in effect for stores within the Smyrna city limits.

15-year-old charged in the death of Marietta teen