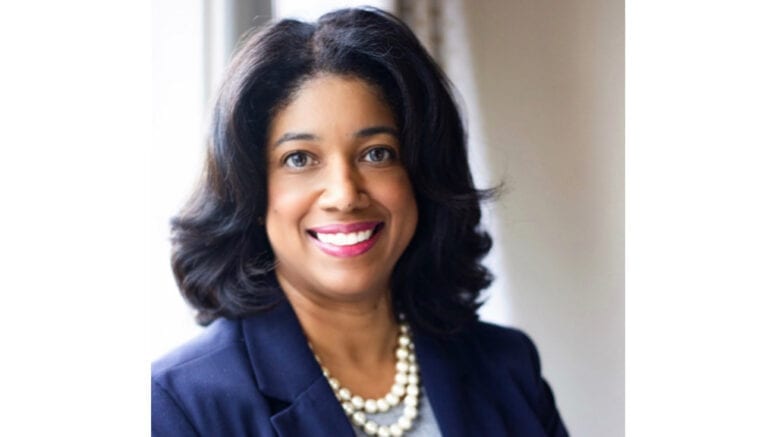 Jannquell Peters is the former mayor of East Point. She is running in the Democratic primary against incumbent David Scott and two other hopefuls to represent the 13th Congressional District of Georgia.

Peters spoke with the Courier in December about her background and why she is running.

“I grew up in Louisiana,” Peters said, “Born and raised in New Orleans and moved to Georgia about 20 years ago.”

During her first year of law school at the Southern University Law Center in the 1990s, she received an internship at the Fulton County Superior Court, and that is what brought her to Georgia.

“I have a very small, very close knit small family, with two younger sisters,” she said. “I was very fortunate to have a set of great grandparents and two sets of grandparents who certainly helped my parents raised my sisters and I. I had two cousins and that’s about it.”

“But I was lucky in that my parents sacrificed an extraordinary amount of time with us girls, and of themselves, to send us to Country Day School which is where I attended high school.”

She graduated with a BA in Political Science and Government from Northern Michigan University in the upper peninsula before attending law school.

“I did not realize that I would get into this type of work,” she said. “I do recall growing up and having my parents really just instill in my sisters and I that we should leave the space around us better than we find it.”

She said her mother and aunts did community service work, including feeding the homeless, and that her grandfathers and uncle served in the military.

“And so we sort of learned service through seeing it happen in our family,” said Peters.

“As I mentioned, I had my first year internship at the Fulton County family division,” she said. “And so I worked in the department where we helped pro se litigants prepare for court. And it was just a really interesting experience. I enjoyed it immensely.”

Peters said her career has always been in public interest work.

“I enjoy representing children who are in foster care; kids who have been abused, neglected or abandoned,” she said. “That’s the bulk of the work that I have done.”

She spent time as a child advocate in the public defenders office, and with the office of the Special Assistant Attorney General.

“So I have had a pretty wide variety of responsibilities, but all in the area of poverty work, public interest work, and I’ve done a little bit of work as a court administrator.”

She served as mayor of East Point, Georgia, from 2014 to 2018, and now serves as an attorney in the Cobb County Juvenile Court.

Asked why she is running, she said, “You cannot do the type of work that I have done even as a public defender, and not see the extraordinary gaps that people just find themselves stuck in and unable to move through or moving out with any type of certainty without any type of help.”

“So one of the reasons why I’m running … is I have seen for years those gaps. And I think that those gaps can be closed with the good legislation and certainly solid leadership,” she said.

“I have spent time being a voice for people who do not have a voice. And I thought if perhaps I move into a legislative space … I could cut through some of those gaps that I see people just sort of struggling with, over and over again.”

“So that’s why I’m running. Because there are still an extraordinary number of gaps that people are falling through in life,” she said. “And I think that we can use an advocate; a true advocate to come in and try to close those gaps.”

“I’ve seen the 13th as having extraordinary capacity to compete with other districts across the state for opportunity,” Peters said. “And I think in order for the district to do that, we have to look at a multitude of different issues. We have to look at our transportation options, our infrastructure … and certainly education.”

“When I think about a theme, to why I’m running, I think about equity,” she said. “We have to look at how do we level up? How do we look at what’s happening in the southern part of the district, looking at what’s happening in the northern part of the district? What are the needs of all the different communities? And how do we collectively fight for those things that matter, which are very, very different?”

“I truly believe that.” she said. “I think we absolutely need to take a look at an extraordinary number of social programs. And it’s just time to just dig in and start to dig out. We have to look at how they are administered … a lot of the programs are probably very middle heavy. And we have to look at how we’re allocating resources.”

Asked to explain what “middle heavy” means, she said it means that an agency has a large number of middle administrators, so fewer resources go into the work the agency is doing.

She said families are moving to “housing options where they have the best move-in special and they’ll stay there for six months.”

“When I talk about fighting for opportunity … when the state has to make recommendations on where a big company should come and relocate we have to start competing in the search,” said Peters.

“We don’t compete, we just we just really do not compete,” she said. “What do you put first? Do you put the resources in education? Of course, that’s where we need to put resources.”

“But where do you start?” she asked. “Where do you start with the resources and infrastructure to ensure that communities are ready to receive those companies that come in and offer our better paying solid jobs where people can work closer to the home and where people can then feel as though they do not have to move every six months … impacting negatively education opportunities for their children?”

Asked her thoughts on health care, she said, “I represent families who generally don’t have insurance. One of the very first votes that I had to break a tie on when I was the mayor of East Point was to renegotiate moved from one health care provider to another.”

She said most people who have coverage through their workplace like their coverage, but the cost of premiums was becoming unaffordable for many people, including first responders.

“We have a crisis when it comes to healthcare coverage. I believe we should be moving as a country towards a Medicare-for-all single single payer system,” she said.

Regarding international involvement by the U.S., Peters said, “I think that we need to take a look at how we are participating as a country, in conflict across the world.”

“Because I represent unaccompanied minors who have come to this country for a better a better way of life,” Peters said, “I do think that we have to have a meaningful conversation around immigration reform. We are a country obviously built on immigrants, and there is a space for everyone.”

“We absolutely need to take a look at how we are living up to being a welcoming country,” she said. “And that just means meaningful immigration reform.”

“As I mentioned before, our country is certainly built on on immigrants and it’s heartbreaking to see children who have been sent here by their families who can’t survive in the countries that they’re living in, whether it’s from government persecution, the drug wars, … and people are coming here for better life,” said Peters.

“I think that we need to streamline the process, be to overhaul the process and make sure that we’re just living up to the kind of country that we are,” she said.

“I consider public transportation as part of infrastructure and certainly in my mind is one of the top … things that I think that we need in the district.”

The primary election in Cobb County will be held May 19.