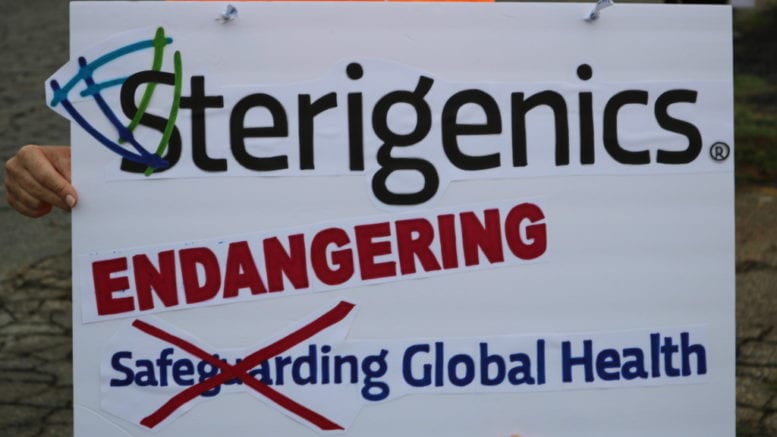 Stop Sterigenics Georgia issued a press release this afternoon calling on the Food and Drug Administration to ban the use of ethylene oxide to re-sterilize personal protective equipment (PPE), and to instead promote the use of hydrogen peroxide.

Earlier this afternoon Sterigenics, which uses ethylene oxide to sterilize medical equipment in their facility near Smyrna, won a ruling in federal court allowing them to operate without interference from Cobb County government until a ruling is made in a lawsuit the company filed against the county.

Janet Rau, President of Stop Sterigenics Georgia, told the Courier in a text message, “As citizens we have the right to know what is happening in our communities and the responsibility to ask questions to ensure that we have a clear understanding of the facts. Our elected officials and their appointees in all branches of government, need to respect the importance of prudent, well informed decision-making now, more than ever before.”

The press release from Stop Sterigenics Georgia reads as follows:

While the world is focused on saving the most vulnerable amongst us, no one deserves more praise than our medical workers, essential services employees, first responders and countless others putting their lives on the line both here in the US and around the world.

They risk their lives, hoping that their PPE will keep them safe, so that they can go home to their families. We must do everything we can to protect them.

Back when our first responders and medical personnel stepped up on 9/11, many worked without the proper protective equipment, and they are paying a price today. Many have paid this price with their lives. We cannot allow that to happen again.

Are Sterigenics, Medline and other members of the Ethylene Oxide Sterilization Association taking advantage of this crisis to turn a profit, now placing the lives of our first responders and medical personnel at risk of multiple harm? They are not only sterilizing items with EtO that do not require that level of sterility, they are now using EtO to also sterilize N95 masks.

3M, the manufacturer of many of the necessary masks, released a statement that EtO is not appropriate to re-sterilize masks due to toxic off-gassing issues. According to the CDC, these issues pertain to the residual EtO left on the masks and other items which our first responders and medical personnel will inhale directly.

The safer Hydrogen Peroxide method is already being used in Ohio to great effect.

We demand that the FDA ban the use of Ethylene Oxide for the re-sterilization of PPE. We ask Medline, Sterigenics and our government agencies to respect and protect the lives of our essential medical personnel and first responders. There is no reason to repeat the tragedy that was inflicted on those who bravely responded to 9/11.

The site has been the subject of community organizing and protests.

In February scheduled testing at the plant was canceled, and Monday of last week the previously canceled testing was resumed.

Cobb Board of Commissioners Chairman Mike Boyce then issued an emergency order at the urging of the FDA allowing the plant to reopen temporarily. Sterigenics objected to the temporary nature of the reopening, and then filed suit.

From delta to omicron, here’s how scientists know which coronavirus variants are circulating in the US