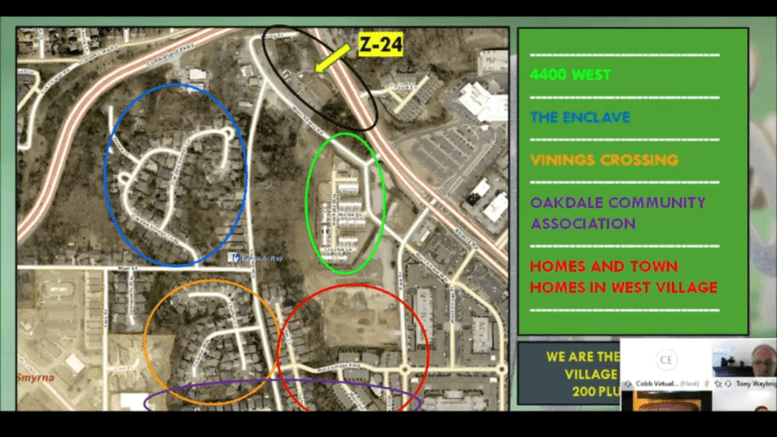 The Cobb County Board of Commissioners will hear a rezoning request for the purpose of building a three-story medical office building at the intersection of Atlanta Road and Cumberland Parkway at their June 16 zoning hearing.

The 4.9-acre property is also bordered by West Atlanta Road on the south, and has been the long-time site of the Oakdale Ace Hardware store.

The northmost part of Oakdale road terminates at the property.

The applicant is Branch Acquisition Company, LLC, and if the BOC grants the request, the medical office building will be part of the Northside Hospital system.

Attorney Kevin Moore represented the applicant at the hearing.

Moore argued that given the intensity of the development along Atlanta Road surrounding the property, the medical office building is a compatible use.

“It includes the large PVC (Planned Village Community), which is West Village, consisting of apartments, townhomes, single family homes, retail restaurants, and so forth,” Moore said. “It’s been a tremendous success due to Branch Properties and the development of West Village.”

“What you have taking place along this stretch of Atlanta Road from Cumberland Parkway to 285 is an intense revitalization that has occurred to this area,” he said. “Fifteen years ago it didn’t look anything like it does today.”

“Therefore, we certainly believed that a proposed medical office building of only 76,000 square feet is perfectly within the goals, intents and spirit of the land use plan,”

Moore said that medical and professional offices are encouraged in a Neighborhood Activity Center as a transition to its edge.

Opposition to the request

Alette Stache, a resident of the nearby 4400 West community, and a leading opponent of the development, spoke in opposition.

“I stand before you representing over 200 homeowners in the Oakdale/West Village district,” she said. “You’ve received opposition letters from each of these communities.”

“And as you can see on this map, we are right behind the tract up for rezoning and are most directly impacted by the rezoning request,” she said. “We believe that as a community, our choices should not be limited to the current state of blight or a 71-foot-tall medical building.”

Stache presented a list of reasons for community opposition to the project.

“First of all, the developer has not met with us. We’ve asked for this it has not happened,” she said. “The proposal does not comply with the criteria in the Cobb County land use plan.”

Stache said the the site is too small for the proposed use.

“And contrary to the applicant, we do see traffic as a major issue,” Stache said.

“Regardless of the pretty park area added, the project still does not provide adequate landscape screening,” she said.

“The stipulation letter contains way too many loose ends pertaining to services and hours. A lot of our concerns and requests have gone unanswered,” she said.

“We are also experiencing issues with Branch Properties’current development in West Village,” she said.

Stache said that the opposition to the rezoning was not just from her community, but from the other communities adjacent and near to the property.

She said that the opportunities afforded to the community for input were very limited.

“Despite our best efforts, we have not been able to meet with Branch Properties,” Stache said. “Instead, they’ve invited us to just one Zoom meeting.”

“It was an hour long with limited opportunity for question and answer. Now Branch Properties did choose to have their dialogue with the board members of one community organization, which is a community organization that they funded,” she said, “And of which Mr. Waybright until he was appointed planning Commissioner was the president.”

After Stache spoke, Larry Savage, a resident of East Cobb and a candidate for the chair of the Cobb County Board of Commissioners in last Tuesday’s Republican primary, spoke regarding the charge that Tony Waybright’s past position as president of the Oakdale Alliance created a conflict of interest, since Branch Properties had contributed money to that organization.

“I have a long affection for ethics and fairness in government, and in this case I think a credible assertion has been made that a member of the Planning Commission has a conflict of interest,” he said.

“I would encourage the other members of the board to make a determination to hear the case, the objections, and make a ruling on whether the commissioner does or does not have a conflict of interest,” Savage said.

Planning Commission Chair Galt Porter asked Waybright if he’d like to respond to the accusation of conflict of interest, and also asked if the county attorney’s office would like to chime in.

“Sure, I would be glad to,” Waybright said. “I’ve addressed this many times with people in the community.

Waybright said that he had never spoken on behalf of Branch Properties in a zoning meeting, and when he had worked on zoning issues it was always as a member of a community organization.

“Speaking at any of those hearings, it was speaking as any other member, say, from East Cobb Civic Association, from MIC or any other homeowners group that speaks and would say; ‘we’re in favor of this … we had come to an agreement on on the stipulations in the plan … we’re in favor with the following items unresolved,’ … and sometimes I’ve spoken as opposed to items that had been presented.”

The county attorney said from the evidence presented to him there did not seem to be a conflict, but that Waybright could use his own discretion.

Commissioner Fred Beloin said, “I would just think it’s appropriate (and) would be beneficial, assuming there’s not going to be a recusal, to just get on the record that there is no direct financial interest in the outcome of the case as the rezoning is approved.”

“And similarly, I think it’d be prudent to get on the record: What if any relationship between the commissioner and Branch Acquisition might exist? So it’s all disclosed and just in the interest of full disclosure to make sure we’re proceeding properly.”

Waybright said he has no financial interest in the zoning case at hand, and no formal relationship with Branch Acquisition.

Comments from the Planning Commission

Since the rezoning request is in District 2, Waybright gave the first comments on the case and made the motion to recommend approval.

“As noted, there has been a lot of great community input,” Waybright said. “It has started in January, it’s moved through any number of groups. There was planning for a large community meeting at the end of March, before COVID-19 prohibited those types of meetings.”

“The only meeting that was was closed at all was, as Ms. Stache noted, the applicant had an in person meeting at a closed restaurant, and they spaced the tables and based on the spacing, that was the number that they were able to have,” Waybright said.

“So the applicant really has done a great job at responding to many of those items,” he said.

Waybright said that since the existing General Commercial zoning would allow clinics up to four stories, a three-story clinic is not out of line with existing zoning.

“It it does fit, and as noted by the applicant, it is consistent with what is across the street at Wellstar,” he said.

One point of contention has been the hours of operation and the possibility of an urgent care center within the building.

Hours of operation for the proposed medical office building shall generally be from 8 a.m. to 6 p.m. Monday through Friday and from 8 a.m. to Noon on Saturdays. However general exceptions to these hours are permitted and allowed where deemed needed or necessary to provide medical services or treatment, at the disgression of the health care providers.

In the event that an urgent care service is to be provided as a part of medical services, such urgent care hours of operation shall not exceed 7 a.m. to 10 p.m.

No patients shall be seen at the proposed medical office building after 12:00 midnight.

The Cobb County Board of Commissioners will hear the case at their regular June 16 zoning hearing.

The opponents of the rezoning, organized as the Smyrna/Oakdale Residents for Responsible Development (RRD), have set up an online petition at Change.org,

Stache wrote the Courier in an email:

The community decided the only avenue left for them was to start making the BOC aware of the overwhelming opposition and has started a letter writing campaign to the District Commissioners and they likely will have over two dozen letters in their possession now. The community also started a Change.Org petition asking Northside and the BOC to please listen to our concerns. In less than a week the petition has received over 700 signatures. In addition several homeowners who fear a devaluation of their property value have filed a right to a Constitutional Challenge.

Information on this zoning became available to the public in early February when it was filed and has been available and discussed for over three months, directly and in social media with a huge number of comments, pro and con.

And from all of that information we distilled a number of true concerns regarding traffic and visibility and landscaping surrounding the project.

The Planning Commission, I think, did a very good job with staff in identifying those concerns, solving many of them, identifying the few remaining ones, and providing some specific direction to the applicants or to staff on things that they needed to have ready for the Board of Commissioners to have an effective hearing.

The most recent site plan from the from the applicant shows again another further improvement and adding green space and additional landscape buffering around the parking lot closest to the existing townhomes.

They’ve also improved landscaping around the entire site to beautify it.

The revised traffic study continues to indicate that improvements are being made and that the DOT’s recommendations are being addressed.

And I’m looking forward to seeing that everything is actually done and presented in a good fashion to the Board of Commissioners.