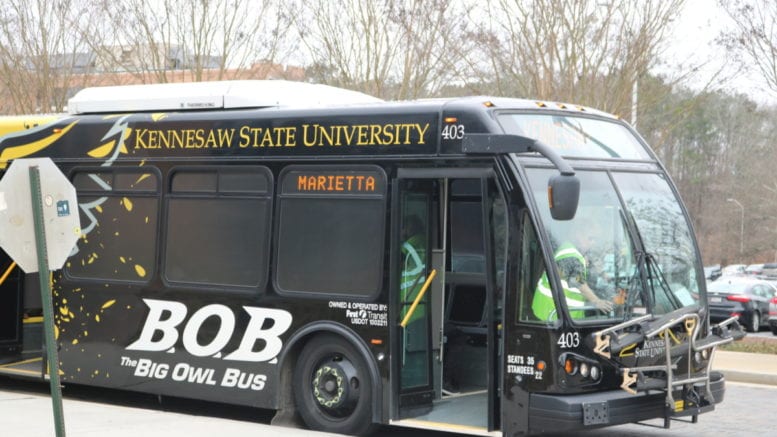 In an email sent to KSU faculty Friday, May 22, the administration released a proposed budget plan after being told by the University System of Georgia that the USG budget will be cut by 14 percent. The budget cut is a result of universities losing revenue due to COVID-19 closings.

Proposed cuts include slashes to Information Technology services, travel and the College of Professional Education among other areas at KSU. Mandatory furloughs implemented by the USG are also expected while KSU proposed leaving vacant teaching positions to remain open to save money.

In the document from the administration, certain cuts proposed are termed as “operational efficiencies,” but KSU UCWGA representatives believe the term to be a euphemism for lower-paid staff being fired.

“UCWGA/KSU questions KSU’s decision to cut jobs first especially during this crisis when so many of our workers and their families are already suffering,” according to the press release. “UCWGA/KSU demands that all options including salary caps, low-interest loans, using so-called ‘rainy day funds’, and more progressive furloughs be considered before cutting any jobs.”

Mentioned in the press release was data from a Georgia Open Records Act request from the Atlanta Journal-Constitution, which showed that KSU reducing its budget by 14 percent would mean that 202 faculty positions would be eliminated.

The next fiscal year begins Wednesday, July 1, which is also the deadline for universities to submit budget proposals by. Over 200 KSU employees could lose their jobs by July if the USG accepts KSU’s budget cut proposal.

“This is a pattern we’ve seen since the beginning of this COVID-19 crisis,” KSU Assistant Professor of Integrative Studies and UCWGA-KSU member Sara Giordano said. “We haven’t been consulted, we haven’t been part of the decision making. By we, I mean all workers on campus as well as students. … the budget cuts are really concerning because of the layoffs in particular.”

UCWGA-KSU’s press release said that faculty’s shared-governance structure has not been consulted by Whitten’s administration in the budget cuts process and that KSU immediately jumping to cutting jobs lacks imagination.

KSU Associate Professor of Conflict Management and UCWGA-KSU Coordinating Committee Member Dr. Heather Pincock said that the shared-governance structure at KSU has been in poor shape for a while now and the COVID-19 crisis has exacerbated the poor communication from Whitten’s administration.

Giordano said that the proposed cuts demonstrate that higher public education is not valued and not being adequately funded by state lawmakers. Additionally, she said she believes KSU administration is holding back information from the union that could have been used to host a town hall for students, faculty and staff on the state of the university.

Pincock continued, saying that there should be no excuse for KSU and the USG to not be transparent.

“Given the amount of detail and sort of pre-approval that we know goes into the production of these quote-unquote proposals and the fact that the new budget year begins so soon, I just don’t think that’s an acceptable excuse for providing this little information and leaving the workers — who have been told enough information to know that their jobs are uncertain — to tell them nothing else is very inhumane,” Pincock said.

Despite the proposed cuts, the union is currently working on alternatives to job cuts and furloughs to be released for the end of this week. As included in the press release, one alternative UCWGA-KSU would like to see is higher-paid faculty taking salary cuts.

“We [UCWGA-KSU] expect that a more concrete set of recommendations based on that research is coming soon,” Pincock said. “I think that there’s a narrative being presented that it’s inevitable that there have to be job cuts and these other ideas that we present are ways that comparable cuts could be made without anyone having to lose their job.”

We reached out to KSU on Friday and Monday morning for comment, but they had not responded as of the deadline for this article.

Are children in the south Cobb area OK?