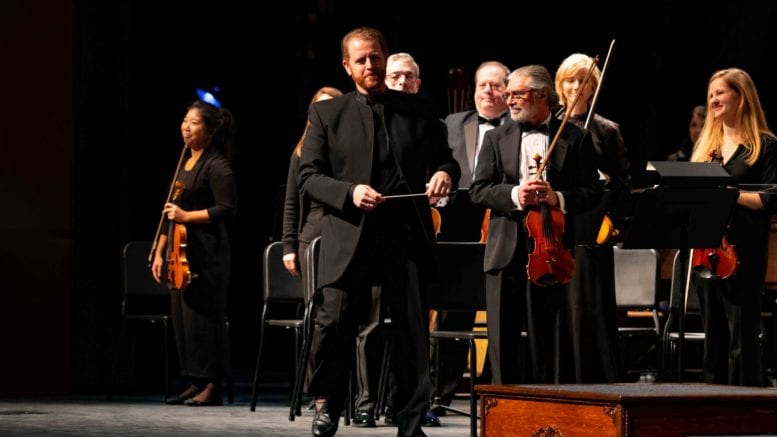 Marietta-based Georgia Symphony Orchestra announced that it will return to the stage for its 71st season with a performance of Gustav Mahler’s Fourth Symphony on September 21, 2021. The concert will take place at the Marietta Performing Arts Center, 1171 Whitlock Ave NW, Marietta, GA 30064.

According to the GSO press release, “This work often is referred to as Mahler’s most ‘chamber-like,’ due to the intricacies and interplay between instrumental sections.”

In keeping with the GSO’s commitment to “diversity and inclusivity in classical music”, this season’s concert series will include the works of two American women composers and performances by two women soloists.

For more information read the complete GSO announcement, reprinted below:

Marietta, Ga. (July 15, 2021) The Georgia Symphony Orchestra is thrilled to announce its 71st concert season with a return to the stage beginning late September 2021.

The GSO’s Classics series, led by Music Director and Conductor Timothy Verville, features three artistically captivating and musically challenging classical performances at either the Marietta Performing Arts Center or the Bailey Center for the Performing Arts at Kennesaw State University. In an effort to continue its focus on diversity and inclusivity in classical music, the series features the works of two American women composers and two women soloists.

On Sept. 25, 2021, the orchestra will kick off the season with Mahler, smahler, a reduced orchestration of Gustav Mahler’s Fourth Symphony. This work often is referred to as Mahler’s most “chamber-like,” due to the intricacies and interplay between instrumental sections. Soprano and Marietta native Maria Valdes, who has received acclaim on the stage from San Francisco to Chicago and New York, is the featured soloist.

The GSO’s performance of Beethoven at the Beach, scheduled for Feb 26, 2022, features Amy Beach’s Symphony No. 2, the first symphony written and published by an American woman composer, and Beethoven’s Violin Concerto in D Major. The award-winning violinist, Minami Yoshida, joins the GSO for her American debut. Yoshida was a major prize winner at the Montreal and Sibelius competitions and has performed with the Helsinki Philharmonic Orchestra, Finnish Radio Symphony Orchestra, Orchestre Symphonique de Montréal, Tokyo Symphony Orchestra and others.

The Classics series concludes on May 21, 2022, with a concert entitled The Firebird and Music of Remembrance. The performance includes American composer Jennifer Higdon’s Blue Cathedral, one of her most performed works, and Igor Stravinsky’s Firebird Suite (1919), which is a collection of music from the ballet of the same name. This concert also will feature the GSO’s phenomenal 90-voice GSO Chorus.

In addition to the Classics series, the GSO’s season also includes its Holiday Pops, Sensory Friendly and GSO Jazz! concerts.

Two shows of the GSO’s beloved Holiday Pops concert will be held at the Marietta Performing Arts Center on Dec. 4, 2021. In addition to a traditional sing-along and great holiday favorites, the concert also will feature the winner of its Virtual to Center Stage competition, opera vocalist Lainie Ewers.  And a special guest each year is a man in a distinctive red suit— a favorite for all ages whom you are sure to recognize.

And once again, the GSO will hold its annual Sensory Friendly performance on March 12, 2022, at the Marietta Performing Arts Center. Funded in part by the National Endowment for the Arts and designed specifically for individuals with sensory sensitivities and their families, the concert features a range of enjoyable musical selections. Audience members are free to be themselves; change seats, move about the auditorium, sing, vocalize, even yell out “BRAVO!” after their newly discovered classical favorites.

To ensure the health and safety of its patrons, musicians and staff, the GSO will follow all recommended CDC COVID-19 protocols at its partner venues.