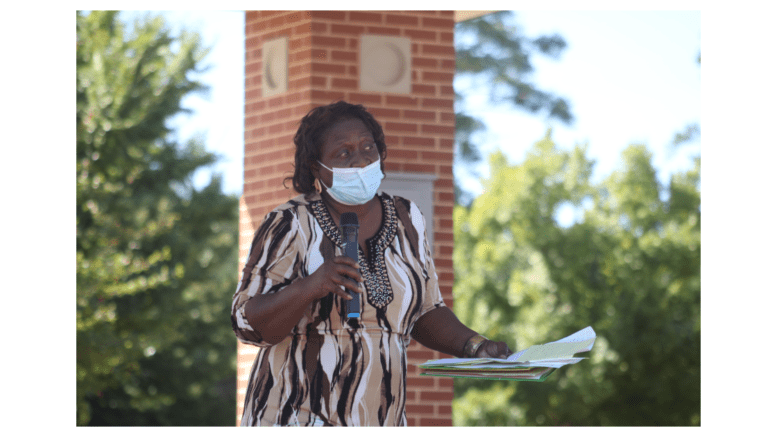 Rehoboth Family Services and the loved ones of a man killed in Paulding County honored the National Day of Remembrance for Homicide Victims this past Saturday.

The event, held at Veterans Park in Dallas, was the first of its kind held in Paulding County. The National Day of Remembrance is recognized across the country every September 25.

Although the event was held in Paulding, the group that hosted the event — Rehoboth Family Services — is based in Cobb and does most of its work in Cobb County.

Cynthia McGarity is the founder of Rehoboth and helped run Saturday’s event.

Paulding’s Park and Recreation Department and Administrative Office allowed Rehoboth to use the park to hold their event.

Rehoboth is a nonprofit that was founded in 2007 and helps families impacted by incarceration.

McGarity, who is also a mother, is one of the people at the event who has lost a loved one to homicide. She describes her situation as unique, as she sits on both sides of the law.

One of her sons was incarcerated while one of her other sons, Malcolm Webb, was killed in 2016.

McGarity said she held the event in Paulding County because that is where her son was killed.

At the event, she explained the origins of the National Day of Remembrance for Homicide Victims.

“In May 2007, this act was initiated by the United States Congress,” McGarity said. “The family which petitioned Congress was Robert and Charlotte Hullinger of Cincinnati, Ohio. Their 19-year-old daughter was the victim of a homicide in Germany in 1989, and it took almost 27 years of consistency of them petitioning, of them doing everything that it takes because their daughter’s life was important — just like all of our loved ones’ lives are important.”

The Hullingers’ daughter was named Lisa. Congress decided that on September 25, the day Lisa was killed, would be the National Day of Remembrance for Homicide Victims.

“We chose not to look at the fact that our loved one is not here,” McGarity told the crowd that was comprised of people from local organizations. “But to celebrate their life when they were here.”

During an open mic session, other people had the opportunity to speak about loved ones they lost to homicide.

Denequia Able, a singer based out of Atlanta, said that her brother was killed by a couple of his friends over drugs. Able said law enforcement has not discovered who killed her brother.

Annette Hughes, a behavioral therapist, spoke to the importance of therapy.

In particular, she touched on emotional intelligence and how parents must incorporate it into everyday practices in order to improve communication with their children.

“I want you guys to understand when we talk about generational patterns of behavior, what that looks like is when we ourselves go re-educate ourselves [with regard to] parenting and why emotional intelligence is critical to our healing process and coping and our kids’ ability to cope,” Hughes said. “ … I’m here to tell you all — seek counseling … Mental health is important. Take care of your mental well-being.”

In addition to McGarity, other family members of her son Malcolm spoke at the remembrance event, including Malcolm’s brother Koron Webb, who closed out the ceremony.

Koron Webb said that he still has not processed the death of his brother. He had already lost his father and was still dealing with grief from losing friends while serving in the military in Iraq and Afghanistan.

“I got to the point to where I didn’t think that I was going to come home because of the things I was dealing with over there,” Koron Webb said.

Koron Webb said that while abroad, he was mentally preparing in case he never came back home and kept telling himself that his family would be okay.

“But I did — I did come back,” Malcolm’s brother said. “And when I got back, I ended up burying my brother five months later.”

Koron Webb said that grieving has not been an easy process and like Hughes, encouraged those in the crowd to seek outside help.

Malcolm’s brother said that he has been “blessed” to have the support of his fiancée, family and friends.

Koron Webb then proceeded to talk about who his brother was.

He said his brother was full of complexities and that growing up, he loved sports and experienced incarceration.

“Understand that Malcolm is extremely intelligent, talented in many ways,” Koron Webb said. “Some say to use your talents that God has given you and he did exactly that. It is true, his talents have taken him down many roles in life — both good and bad. But life is full of twists and turns. Nobody knows where you will end up.”

Koron Webb said his brother came from a family of entrepreneurs and through that found a passion for business, leadership and helping people.

“He became well known in his community for his mannerisms, intellect and ability to communicate with anyone, no matter who you were,” Koron Webb said. “He didn’t graduate from college or work a corporate career. He lived his life by his talents. As I grew older, and my relationship developed with my brother, I begin to understand who he really was. It’s ironic that life begins with a birth certificate and a social security number and ends with a death certificate and a file number. While these both represent life and death it doesn’t tell the story in between. And that is what really matters.”

The crowd participated in a balloon release at the end of the ceremony.

After the Remembrance Day ceremony was also where Rehoboth initiated “Malcolm’s Closet Relaunch and Dedication Ceremony.”

McGarity announced that Rehoboth will have stipends for parents affected by incarceration so that they can provide for their children and whatever extracurricular activities that child may be interested in.

The group, with the help of community partners, will also provide furniture for those in need.

“We want to help other families know that whatever your challenge may be, however suddenly and unexpected it may be, that you can still carry on and be successful and move forward,” McGarity said.

Malcolm was also a father who left six kids behind.

His son, Khalil Webb, recently took his father’s last name to honor him.

After the ceremony, Khalil Webb said he remembers his father as a “great” and “smart man.” Khalil Webb’s advice is to always “stick up for your family.”