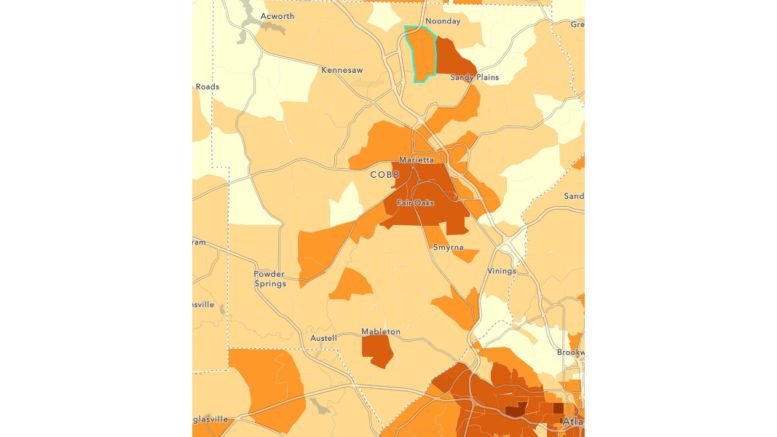 How prepared are Cobb County residents in the face of disaster? The U.S. Census Bureau has created a means of evaluating how prepared communities within Cobb County are to recover from catastrophic events.

These means are called the Community Resilience Estimates.

Disasters can be anything from storms and floods to pandemics.

Community resilience is the capacity of individuals and households to absorb, endure, and recover from the health, social, and economic impacts of a disaster such as a hurricane or pandemic.  When disasters occur, recovery depends on the community’s ability to withstand the effects of the event. In order to facilitate disaster preparedness, the Census Bureau has developed new small area estimates, identifying communities where resources and information may effectively mitigate the impact of disasters.

The bureau also provides an interactive tool that you can use to determine how many risk factors the community you live in has on average, and you can look at the data down to the census tract level.

To visit the interactive Community Resilience tool follow this link

How does the Census Bureau determine ability to recover?

Then the census bureau determines how many people or households are in each of those three categories for each census tract.

If that seems too confusing, just think of it as how many people in each census tract are prepared to deal with a disaster.

The risk factors, determined by data from the 2019 American Community Survey, include:

In other words, if you are a person below the poverty level, with a disability, and no car, your ability to recover from something like a flooded house or COVID-19 would be less than someone who has none of the risk factors on that list.

How does Cobb County fare overall in capacity to recover?

There are a number of ways to look at this, and we’ll examine them in future articles, but this time we’ll focus on the most at-risk people.

This screenshot of the map of Cobb County from the interactive tool displays so the darkest areas are the areas at the highest risk.

This top-level view shows that the areas at highest risk are a cluster of five census tracts in the Marietta and Fair Oaks communities, a census tract south of Veterans Memorial bordered by James Road and Mableton Parkway in Mableton, and a census tract east of Town Center bordered by Canton Road and Ebenezer Road.

Complete list of tracts sorted from highest risk to lowest