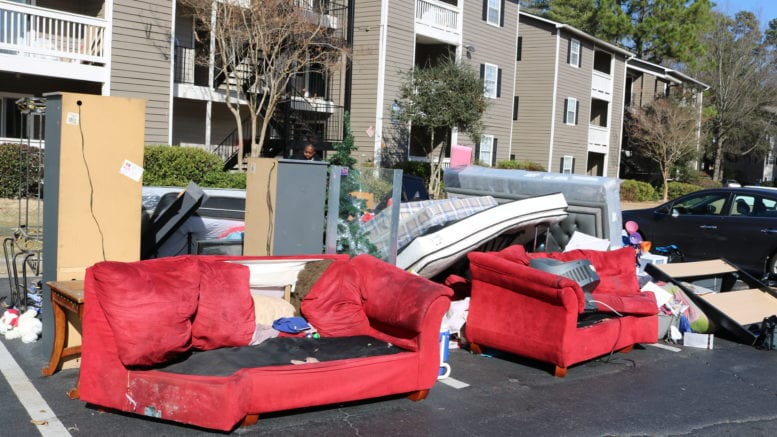 The aftermath of an eviction (photo by Larry Felton Johnson)

Janell Wise has lived in the same apartment since she moved to south Cobb County from Tennessee in 2014. Wise, 40, lives with her 13-year-old son in Mableton and works as a team leader at an Amazon facility near Fairburn.

Last August, she came down with COVID-19. After her son tested positive in September, she missed nearly two months of work.

“Once COVID hit, we just weren’t really prepared for it as much as I thought I was,” Wise said. “It really put a financial strain on us.”

The rent for Wise’s two-bedroom apartment increased to $1,025 from $967 in February after her first-ever late notice in December. Wise is looking for both a second job and rental assistance, but she’s had trouble applying to the Georgia Rental Assistance program in the past.

The rental assistance program is administered statewide by the Department of Community Affairs, and it offers federal funds covering up to 18 months in rent and utility bills. The department has so far struggled to distribute its first allotment of federal funding despite what experts and advocates call a clear housing need.

Last November, the Treasury Department required DCA to file a Program Improvement Plan to avoid losing $120 million to higher-performing jurisdictions. The Treasury approved Georgia’s plan in mid-December, according to Kaley Volkmann, a contract spokeswoman for DCA.

“DCA did not lose any federal funding and is currently operating the GRA program under the approved PIP,” said Volkmann.

In January, the U.S. Treasury allowed DCA to voluntarily reallocate portions of its funding, according to a press release. Volkmann said the state has reallocated $228 million to other Georgia rental assistance programs, adding “this is subject to the Treasury’s approval and disbursement.”

The Treasury Department has approved a total of $80.6 million in reallocations to five counties. On Feb. 8, Fulton County officials announced they have received an additional $25 million in emergency rental assistance, indicating some of the reallocated funding has already reached smaller jurisdictions.

Georgia’s state program still ranks 48th out of 50, ahead of only Wyoming and South Dakota, according to the National Low Income Housing Coalition. Seven states have already distributed 100% of the first round of pandemic-related federal rental aid.

According to the latest community affairs program metrics, $84 million of Georgia’s $552 million allocated through the first round of the rental assistance program has gone to 12,000 renters. More than 55,000 tenants have applied, and another $7.3 million is scheduled.

“Between two waves of emergency rental assistance, [DCA] got about a billion dollars from the federal government to help Georgia’s families, and they sat on it for over a year,” said Elora Raymond, an assistant professor in the School of City and Regional Planning at Georgia Tech and a project lead for the Atlanta Region Eviction Tracker. “And they did this during the foreclosure crisis. They’re doing it again during the pandemic housing crisis.”

From 2010 to 2021, the state agency oversaw the HomeSafe Georgia program, distributing federal funds meant to prevent Georgians from losing their homes during the foreclosure crisis. A 2017 audit by a federal watchdog group found that DCA “withheld funds,” disbursing only a portion of the available $370.1 million to homeowners and spending $32 million on administrative expenses. Raymond sees a pattern between the two community affairs-managed programs.

“These programs are different by design and in both DCA worked diligently to administer the federal funds,” said Volkmann. “HomeSafe GA closed out very successfully at the end of 2021.”

Ongoing efforts across the state

Rather than a tipping point of mass evictions reminiscent of the 2010 foreclosure crisis, Raymond says the housing crisis Georgia faces today is more of a constant, slow roll.

According to the Atlanta Region Eviction Tracker, there were 9,752 reported eviction filings in Atlanta’s five-county region in January 2022. This figure is down 29% from January 2019, but up more than 25% from last year.

Various Georgia agencies and organizations are working to alleviate the crisis on multiple fronts. Protip Biswas, the vice president of homelessness for United Way of Greater Atlanta, says the nonprofit partnered with the city of Atlanta to disburse all its rental assistance funding. The program is not currently accepting applications.

“There are certain populations like seniors, or where language barriers come in, that is even more difficult for them, so it’s not easy to access this money,” Biswas said. He added that it’s important renters now apply through the state program to initiate assistance.

According to Lindsey Siegel, Atlanta Legal Aid’s director of housing advocacy, the organization has already assisted 1,188 households with landlord-tenant related cases in Atlanta’s five-county region this year, with most trying to help people avoid eviction.

“Rents are going up sometimes by hundreds of dollars from one lease to another,” said Siegel. “And if tenants aren’t able to pay those increases, they’re being pushed out.”

Georgia as a whole saw rents increase by 31% from 2020 to 2021, and the average rent across the state was $1,478, according to the most recent Rent Report from Rent.com. The National Equity Atlas’ rent debt dashboard estimates there are 251,000 Georgians behind on rent.

“Cobb County was wall to wall with evictions before COVID,” said Monica DeLancy, the founder of We Thrive in Riverside Renters Association. “Now we’re seeing rents over $1,000.”

Wise covered most of her February rent with help from We Thrive in Riverside, but the threat of eviction is taking its toll. Over the last few weeks, she’s been noticing piles of furniture in front of apartments in her area. Wise hopes she can stay in her apartment at least until her son finishes the school year; her 19-year-old daughter is a college sophomore in North Carolina.

“Whenever she comes home, is it going to be a home for her to come to?” Wise said. “That’s why I’m trying to fight so hard, working hard every day. Just trying to have just enough money to make sure we can make it.”

To apply for Georgia’s Emergency Rental Assistance Program, go to georgiarentalassistance.ga.gov or for help, contact the Department of Community Affairs at rentalassistance@dca.ga.gov or 833-827-7368. Anyone in the state can apply, and there is an initial screening to determine eligibility.

For help with Section 8 problems, contact the Georgia Department of Community Affairs:

If immediate assistance is needed because you are experiencing homelessness or on the verge of homelessness, please email HomelessInfo@dca.ga.gov. For more information, visit DCA’s Homeless and Special Needs Housing.

Georgia Legal Services Program can help with eviction cases at 833-457-7529 or at https://www.glsp.org/housing/.

9,600 new cases added to Georgia’s COVID numbers today due to an unreported backlog of cases