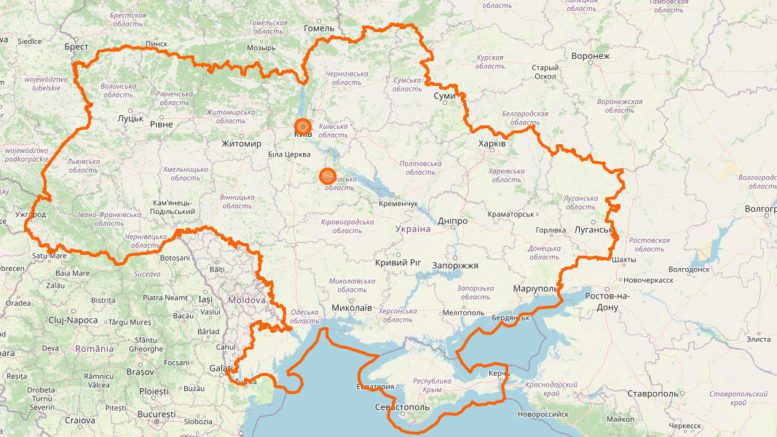 Map of Ukraine from Open Streetmaps

By Benjamin Jensen, American University School of International Service [This article first appeared in The Conversation, republished with permission]

Advancing deep into Ukrainian territory seized by Moscow earlier in its invasion, a counteroffensive launched in September 2022, has forced back the invading Russian army. In the process Kyiv has recaptured over 2,000 square miles of land in the country’s northeast and left Moscow’s prized units like the 1st Tank Guards Army in disarray.

The success of the counteroffensive has shown that what is known in military circles as “operational art” – the creative use of time, space and forces to achieve a position of advantage – can be more important than relative combat power and simply counting the tanks and artillery possessed by either side in conflict.

And while this latest operational turning point in Ukraine is not the end of the conflict, as a defense strategist with more than 19 years of military experience, I see three key insights about modern warfare in the recent Ukrainian success.

1. Deception is still possible in conflict

Modern war takes place during an open-source intelligence revolution in which commercial satellite photos and a constant stream of social media facts and fiction bombard politicians, soldiers and citizens. This flood of information makes hiding large military formations increasingly difficult, if not impossible. Yet, Ukrainians have shown the world that a globally connected information environment does not mean the art of deception is dead.

Ukraine’s military planners used old concepts optimized for a new era in designing its counteroffensive. They employed a variant of the 19th-century military concept of “central position.” This concept is associated with Napoleon, who when confronted with two armies, positioned his forces between them to split the enemy. This allowed the French leader to concentrate his forces in one location, even when they were outnumbered overall.

In the recent counteroffensive, Ukraine used a central position to confront two concentrations of Russian forces, one in the east around the city of Kharkiv and the Donbas region – which includes portions of Donetsk and Luhansk – and a second in the south along the Dnieper River and Kherson. These Russian forces collectively outnumbered Ukraine’s army and possessed greater numbers of tanks, armored vehicles, artillery and attack aircraft.

While Ukraine was building up forces in Kherson in the south and using rocket artillery, sabotage and unconventional warfare to attack infrastructure to isolate Russian troops, it also maintained a large armored force in the east. This gave Ukraine the ability to fix Russian forces along one front while attacking on another.

Ukraine’s central position made Russia have to factor in the possibility of Ukrainian troops attacking in either direction.

Ukraine also employed a clever form of deception adopting elements of what is known as “Magruder’s Principle.” This maxim holds that it is easier to induce a target to maintain a pre-existing belief than introduce a new idea.

By conducting strikes that isolated Russian forces along the Dnieper River and making public statements that suggested Ukraine would attack Kherson, Ukraine reinforced Russian views that Kherson would be the initial main area of attack during the counteroffensive. This use of public statements and action to shape an adversary’s decision-making is also consistent with the old Soviet concept of “reflexive control,” which uses misinformation to skew how the target perceives the world and conditions them to make self-defeating decisions.

As a result, Russia moved forces to the south to bolster its fighting positions in Kherson. Doing so likely hollowed out Moscow’s forces in the east and compromised its ability to deploy reserves.

Combined with Ukraine’s central position, this clever ruse meant that Kyiv set the conditions for the large-scale rout of Putin’s army in the east and future operations to retake Kherson.

At a more tactical level, Ukraine has proven a master of using precision strikes to hamper the movement of Russian troops. Kyiv has employed swarms of “loitering munitions” – airborne drones that locate and then attack targets – alongside a mix of anti-tank guided missiles as well as traditional armored formations and artillery to pressure Russian ground forces.

This combination has freed up the country’s warplanes, special operations teams and long-range precision missiles to hunt Russian radars, command posts and supply depots. The net result is that Russian forces have had to confront multiple dilemmas and have struggled to build up sufficient combat power to counterattack and halt the Ukrainian advance.

War is a complex system governed more by power laws than linear dynamics. That is to say, smaller, mobile force – like the Ukrainians – can defeat larger armies. The depth and simultaneity of the Ukrainian tactical approach in the counteroffensive produced shock and dislocation. Information operations compounded this effect by circulating images of retreating soldiers, thus making defection and surrender contagious.

3. War remains a continuation of politics

A political timeline drove the sequence and setting of Ukraine’s recent counteroffensive. Kyiv needed to disrupt the ability of Russia to hold an illegitimate referendum in Kherson and occupied territory in the east – the same playbook Moscow used to seize Ukrainian territory in 2014 through the Minsk agreement.

Moscow wanted to use the referendum to justify annexing Ukrainian territory and show progress to a weary Russian public.

At the same time, Putin was likely trying to consolidate territorial gains before using the looming threat of winter to divide Western support for Kyiv. In other words, at the strategic level even if the recent counteroffensive had not gained large amounts of territory or defeated entire Russian divisions it could have complicated Moscow’s ability to hold a referendum in occupied territory. Russian forces would be forced to defend the front as opposed to securing polling sites.

So while the operational and tactical gains produced by the counteroffensive are important, the underlying underlying objective Ukraine is pursuing at the strategic level remains political.

This political logic, despite the success of the counteroffensive, casts doubt on the prospects of the conflict ending with a decisive battlefield defeat of Russian forces in the near term. Even if Ukraine makes significant gains in the south and retakes Kherson, Moscow can still opt for a large-scale mobilization and continue the war until either Russian elites or its citizens turn on Putin and his inner circle.

When should you get the new COVID-19 booster and the flu shot? Now is the right time for both