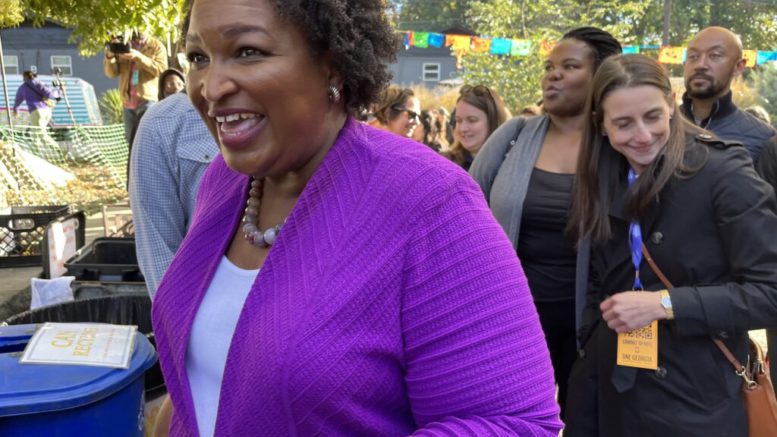 Stacey Abrams at an Atlanta restaurant kicking off of her statewide bus tour on the second day of early voting. Jill Nolin/Georgia Recorder

Georgia’s record-breaking midterm turnout is encouraging, but should not be seen as a sign that votes are not being suppressed, said Democratic gubernatorial candidate Stacey Abrams in a Monday press conference.

“It is wrong to suggest that there is a correlation between voter turnout and voter suppression because suppression is about barriers,” she said. “If those barriers are not completely successful, the credit does not go to those who erected the barriers. The credit goes to those voters who found a way to navigate, overwhelm and overcome those barriers.”

Secretary of State Brad Raffensperger celebrated the throngs of Georgians casting their votes early, noting that midterm records have been broken by at least 50% every day since polls opened last Monday, capping off with a 211% increase on Sunday over the same day four years ago.

“211% of 2018 shows that voters are enthusiastic, but most importantly, have the options available to get that vote in early,” Raffensperger said in a statement. “Reducing the Election Day burden on county election officials ensures success on Election Day. County election officials deserve our praise, as both counties and voters are prepared this year.”

Raffenspeger, a Republican who is running for re-election against Democratic state Rep. Bee Nguyen of Atlanta, views the swelling tide of ballot casters as vindication for the state’s 2020 Republican-backed election overhaul, Senate Bill 202.

The law included changes to mail-in voting, early voting dates and more. Democrats railed against its passage, saying it will stop people from voting, especially minorities and the disadvantaged.

Republican Gov. Brian Kemp brought up those arguments when he faced off in a debate against Abrams last week.

“She said that Senate Bill 202, our recent elections integrity act that we passed two years ago, would be suppressive and Jim Crow 2.0. Just this past May in our primaries, we again had record turnout in the Republican primary and the Democratic primary. In Georgia, it’s easy to vote and hard to cheat.”

To Abrams, Kemp’s logic makes little sense. Voters broke records in 2018, she said, but that was in spite of the fact that tens of thousands of voters were removed from voter rolls, had their registrations held up because of the state’s exact match requirements or endured long lines, all of which Abrams and Democrats say amount to voter suppression.

Last month, U.S. District Judge Steve Jones ruled against Fair Fight, an organization founded by Abrams, ruling that the state did not violate voters’ constitutional rights in 2018. Abrams said she was disappointed in the ruling but vowed to fight on.

Campaign manager Lauren Groh-Wargo said the biggest impact of SB 202 this year has been in the number of absentee ballots, which she said represents only 60% of mail-in ballots from 2018. Groh-Wargo said the campaign will also be closely tracking mass voter challenges.

“I will say as I do very often that the vernacular way of putting it is more people in the water does not mean there are fewer sharks,” Abrams said. “The barriers to access are real. SB 202 is continuing to harm voters, and it is continuing unabated.”

Abrams did not take questions at the press conference, which came as Politico published a story alleging Fair Fight paid out millions of dollars in legal fees to the firm of a longtime friend.

Polls have shown Abrams lagging, at an average of eight points behind Kemp, according to Real Clear Politics.

“We overall feel very good, considering all of the barriers and considering the challenges of SB 202,” she said. “Really strong turnout. And under the hood of this turnout is really strong enthusiasm and voting by Black Georgians, specifically.”

Among those who stated their race on their voter file, 35.5% were Black, compared with 31% in 2018, Groh-Wargo said. In this month’s Georgia Recorder/Georgia News Collaborative poll, 81% of Black voters said they support Abrams. The campaign is also encouraged by data showing that 16% of 2022 voters did not cast a ballot in 2018, Groh-Wargo said, which may indicate that Abrams’ strategy of registering new voters is paying dividends.

“The bottom line is we can win. We are working hard to win outright, we will also be ready for a runoff. We are readying ourselves for every post-election scenario. Black voters are flexing their power, our Democratic coalition is flexing their power across the board.”