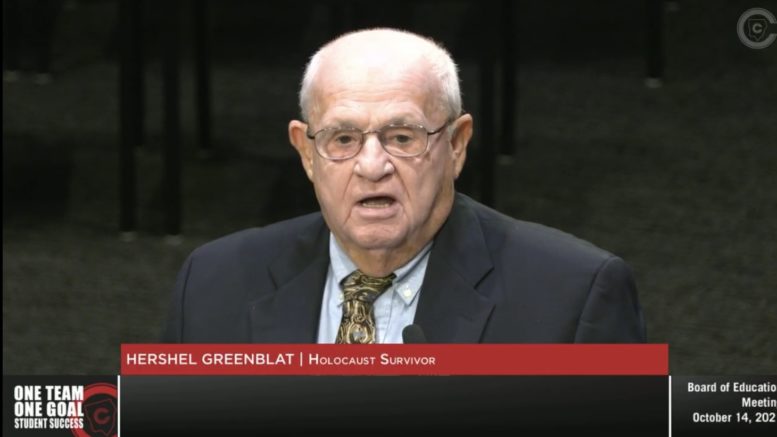 The Cobb County School Board passed a resolution against antisemitism and racism 4-2 despite requests to postpone it until next month for review and discussion.

Board member Tre’ Hutchins made the motion to delay the vote on the resolution.

“I’d just like to have more time to actually go through the resolution with colleagues here on the board as well as with people within the community that have vested interest in this particular initiative. As a board member I prefer that we get it right the first time,” Hutchins said at the work session.

Chairman Randy Scamihorn sent the resolution to the other board members Monday night, according to board member Jaha Howard. At last month’s meeting Scamihorn said he would collaborate with Rabbi Larry Sernovitz of Temple Kol Emeth.

“I sent an email early this morning with a couple of recommendations, and called your phone and left a message and hadn’t heard back, so I wanted to make sure we took the time to discuss it since everything’s been happening over that last less than three days” Howard said. “I know that you and members of the community worked on this for about a month, but the rest of us just got this two and a half days ago.”

Chairman Randy Scamihorn responded, “All the board members equally had the opportunity to work with the community as well as those that were interested in it.”

Howard said he was not aware that it was going to be a racism resolution in addition to antisemitism and proposed adding a statement that the district would take action to rename schools named for Confederate military leaders. The district would “rename them in an appropriate way that reflects the goal of inclusion.”

Hutchins continued to object on the grounds that a joint resolution for racism and antisemitism wasn’t discussed at last month’s meeting and more discussion was needed.

The resolution was passed as originally presented by Scamihorn.

Holocaust surivor Herschel Greenblat spoke at the evening voting session. He told the board it broke his heart at last month’s meeting to hear Jewish Cobb students say they are afraid to go to school.

“Let us not sweep these recent acts of graffiti and vandalism under the rug,” he said.

He invited the board to the William Breman Jewish Heritage Museum for a guided tour of the Holocaust exhibition. He also requested anti-bias and anti-hatred curriculum in all schools and for the reinstatement of the ADL’s No Place for Hate program.

During public comment, previous comments by Scamihorn referring to “illegal aliens” bringing COVID-19 over the border and Banks referring to COVID as the “China virus” were criticized.

School counselor John Nwosu said, “Things like a lack of transparency in spending, making statements like an influx of infected undocumented immigrants and illegal aliens are impacting us negatively, discussing the denial of system racism, saying words like the ‘China virus,’ having swastikas that are painted on the bathrooms of schools, and arbitrarily changing board rules to silence board members so that the majority of Black and Brown communities are not able to be represented by their elected officials, are things that are contributing to that lack of trust and that continued degradation of community.”

After the work session, Cobb parent Jennifer Mosbacher sent the board an angry email.

“I want to be very clear that I am disgusted and offended by your behavior today regarding the antisemitism and racism resolution. You have gone against all of the principles of inclusion and diversity by excluding the voices of the African American board members. This is NOT the resolution that the Jewish community asked for and without a unanimous vote from the school board it is meaningless. Please don’t think that the Jewish community will praise this effort. We are not fooled,” she wrote.

Vice chairman Banks responded in an email, “Your rabbi helped putting the Resolution together. Complain to your rabbi.”

Screenshot of the resolution that passed, followed by Howard’s proposed additions