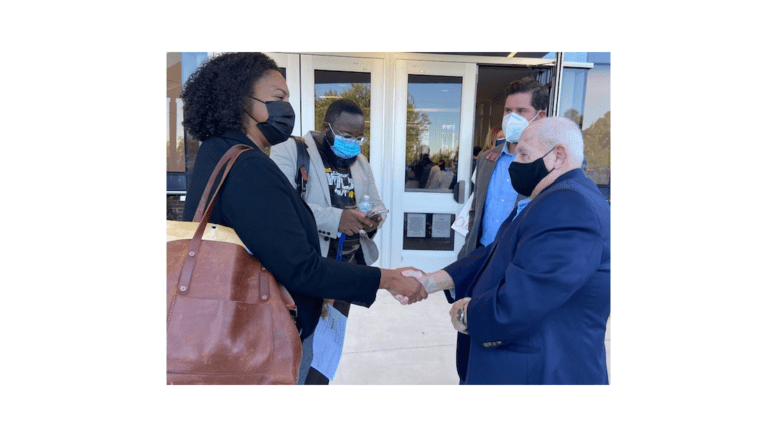 The Atlanta Initiative Against Antisemitism (AIAAS) delivered a petition demanding action to the Cobb County School Board Thursday after swastikas and “Hail (sic) Hitler” were written on bathroom walls at Pope and Lassiter High Schools earlier this month.

The petition states, “We are asking the Cobb County School Board and its associated schools to recognize and condemn all forms of antisemitism that occur on campus and to allow school principals the authority to condemn these acts and reinstate programming to proactively educate the student body and community about antisemitism and to prevent further occurrences.”

It currently has more than 4,400 signatures.

The district was criticized for its initial statement which failed to refer to the incident as antisemitism, instead calling it “hateful graffiti.” Jewish community leaders have said the district’s response was inadequate.

Lauren Menis, co-founder of AIAAS, told the Courier she was extremely upset that antisemitism wasn’t on the agenda for Thursday’s board meeting.

“This makes what was already a bad situation worse. We weren’t being heard before and we are not being heard now,” she said.

Menis was also critical of the district’s decision to stop using the ADL’s No Place for Hate program in its schools and AIAAS is asking for its reinstatement.

“When hate happens at schools, as it did in two Cobb County schools within one week, there is obviously a problem,” she said. “And anti-hate programming…could have turned this into a teachable moment. It would provide education and understanding for students, teachers and the entire community. It allows the school community to listen, to be heard and to heal. And it helps stop these hateful acts from happening again.”

According to an email sent to parents on Sep. 17, Simpson Middle School also had an incident of bathroom vandalism that included “a small pencil drawn swastika in the 8th boy’s restroom.”

Principal Dr. LaEla Mitchell wrote, “I was disheartened to learn of the appearance of an anti-Semitic symbol in our school. Additionally, several students have also shared with me that they have experienced discrimination in the form of racial or anti-LBGTQ epithets, language, and behavior from other students.”

According to the email, the investigation at Simpson is ongoing.

During public comment at the afternoon work session, Rabbi Larry Sernovitz told the board and superintendent, “When you don’t condemn behavior, you condone it.”

“We want to see a systemic program that will address antisemitism and hate…calling these events out as antisemitic hate crimes would be start,” he said.

Rabbi Daniel Dorsch said, “The fact that it was only very recently that the school board discovered that the original date for this meeting was Yom Kippur, the holiest date on the Jewish calendar, underscores the magnitude of this disconnect and the need for us to work together after this meeting in the long-term to solve this crisis.”

Dr. Mitzi Schepps told the board her son was harassed at Simpson Middle School ten years ago for being Jewish.

“We sought help from the people who were supposedly there to protect him – his teachers, the guidance counselor and the principal – but these employees of yours were not equipped with the education or dialogue for how to deal with antisemitism, so they did nothing,” she said.

During his remarks, Superintendent Chris Ragsdale said, “This school district does not and will not tolerate hate in any form.”

He said student disciplinary charges have been brought but said he was unable to elaborate due to the law. He also requested board members not comment until the matter had gone through the disciplinary process as it could jeopardize the outcome.

Board Chairman Randy Scamihorn said he is preparing a resolution condemning antisemitism, but it isn’t ready. He also said he had spoken personally with Rabbi Sernovitz.

Holocaust survivor Herschel Greenblat attended the evening voting session where he was recognized by the board and superintendent.

Greenblat spent the first few years of his life hiding in a network of caves in present-day Ukraine because his parents were part of the resistance against the Nazis, and later, the Russians. His family lived in camps for displaced persons until their application to come to the United States was granted in 1950.

Hannah Levy, a student at Lassiter High School, said she no longer feels safe at school.

“I don’t feel safe wearing my Star of David necklace there anymore. I’ve been getting comments for years, but it’s grown recently…the school board needs to make an immediate change because the longer you wait, the more it’s going to fester, and the more it’s going to happen…we want anti-hate and anti-Holocaust education taught at Lassiter High School and at other Cobb schools.”

Alan Seelinger, a co-founder of Families Against Racism, called the district’s response “woefully inadequate” and asked for the district to reinstate the No Place For Hate Program.

“We ask you to act. It is one thing to reiterate the district’s values and say that you oppose antisemitism, but we are asking you to act on those values…an actual value should be on a board meeting agenda,” he said.

From the Editor: Dispense with the BS. The continued silencing of Black Cobb school board members is about race

White Parents Rallied to Chase a Black Educator Out of Town. Then, They Followed Her to the Next One.

Be the first to comment on "Demand presented to school district that Cobb schools act on antisemitism; Ragsdale says disciplinary action pending"