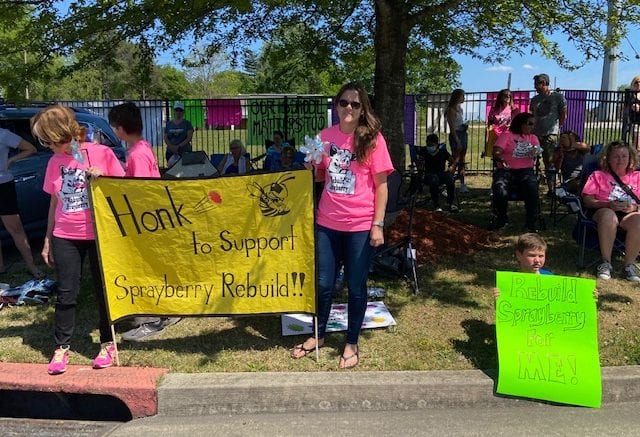 Parents say they are sick of the attitude in the community that Sprayberry isn’t as good as Lassiter, Pope or Walton High Schools. For years they’ve battled rumors of gangs and poor academics, which they adamantly say are not true. The frustration has only grown as those three east Cobb schools have received significant improvements under previous SPLOSTs.

Effie Zoheir has lived in Cobb for 30 years and is a graduate of South Cobb High School.

“We moved into the Lassiter area on purpose,” she said, but ultimately her children chose Sprayberry.

Zoheir is exceptionally proud of Sprayberry’s International Spanish Language Academy, of which she says there are only two programs like it in the state. Furthermore, she said, graduates of the Sprayberry program receive certificates from the Ministry of Spain for being bilingual.

The main building for Sprayberry was built in 1973 and many of the parents are determined that it’s time for a total rebuild of the dated-looking facility. Photos show broken and missing ceiling tiles, sloppy paint and patch jobs, and water leaks in walls. Parents complain of bathrooms that have no hot water and terrible odor. Sprayberry is also unable to host certain music and athletic events due to lack of proper facilities.

A concerned parent speaking directly to Sprayberry’s board member David Chastain after the rally said, “I don’t even care what the outside of it looks like…we don’t even have capable restrooms.”

The stadium is another source of ire. Handrails are missing and steps are crumbling, ralliers complained. Parent Lisa Jackson said her child’s grandparents want to attend football games, but have a hard time maneuvering to the seats.

Chastain told the crowd that the county used to only look at student population growth every five years, but about five years ago, it started looking at growth on an annual basis.

“Remember I told you that things have been growing and working in a counter-clockwise direction? Well, we’ve taken care of Lassiter, Walton, Wheeler. I understand you’re not happy about how it worked out,” Chastain said. “I think you folks are being heard already.”

Chastain assured the crowd that the career tech center and the gymnasium that were promised under previous SPLOSTs are coming. According to a county spokesperson, the construction contract for the gym will be awarded in September.

He expects the board to see the first draft of the SPLOST VI notebook in May.

Cobb Commissioner JoAnn Birrell, who lives in the Sprayberry district also spoke. Though the BOC is a separate entity from the school board, she said, “I’m here for support. To hear your pleas and your ideas and help you get on that SPLOST list to rebuild Sprayberry.”

School board member Randy Scamihorn was also there. He shared a list of previously completed Sprayberry SPLOST projects with the Courier. Some of the larger projects include the performing arts addition under SPLOST III, resurfacing of the track and tennis courts under SPLOST IV, and new turf on the football field under SPLOST V.

“We want our parents to feel that their tax dollars are equitable across the county,” said 17-year-resident Gloria Clarke.