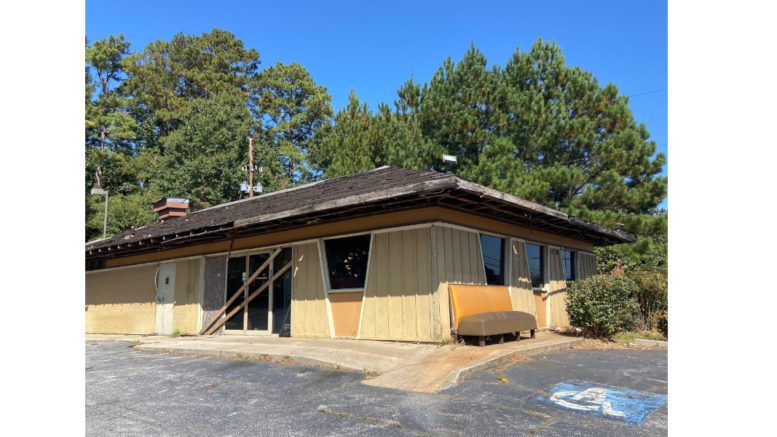 Those who live within the proposed boundaries can now cast their vote early to decide if Mableton becomes a city or remains part of unincorporated Cobb County.

The debate over local control between supporters for cityhood and the opposition has heated up with the approaching election. While there are multiple issues at the heart of the movement, code enforcement is a big part of the discourse.

Code enforcement is one of the four services the city will take over from the county if it passes–along with waste management, parks and recreation, and planning, zoning and economic development.

William Wilson met with the Courier at Mableton Town Square Park. The pocket park has a train playground that was installed in 2021. Newish picnic tables and benches dot the grass. One table has a plaque with a quote attributed to Scientology. Scientology is scratched out and Jesus Christ is substituted in black marker. According to Wilson, the location sat empty for a while before the county fixed it up.

Visible in the immediate area are Mableton Elementary School and Barber Cemetery. Wilson has dozens of friends and family buried there. This pleasant, peaceful area is where a true downtown could develop.

He reminisced about bussing tables in his great uncle’s restaurant and opening day of little league.

“We’d wake up at 6:30, all the dads would bring their trucks to the parking lot, the moms would decorate the trucks, and we’d all be in our uniforms,” Wilson said. “Then we’d start the parade through the town. Everyone was out.”

His desire to recreate the Mableton of his childhood for his own 6-year-old son is a big reason why he is the chair of the Committee for the City of Mableton.

Christie Lynn, a member of Preserve South Cobb, which opposes cityhood, lives in unincorporated Smyrna. She lives inside the boundaries of the new city, which nearly doubles the size of unincorporated Mableton from 40,000 people to 78,000. She is determined to remain unincorporated from any nearby city.

“Those things that were ignored for so long in South Cobb, Lisa Cupid, the chairwoman, is working on them,” she said.

The current board of commissioners, combined with the continued influence of the Mableton Improvement Coalition (MIC), is the path to a better South Cobb, Lynn told the Courier.

The BOC flipped to a Democratic majority in 2020 after decades of what both sides agreed was neglect in this portion of the county. A recent code amendment package addressed some of the ongoing issues in the area.

Wilson also spoke highly of Cupid and district 4 Commissioner Monique Sheffield, but still objected to being subject to the “whim of the county.”

“We’ve never been a focus since I’ve been alive and that’s 45 years,” he said. “I have utmost respect for them. They’re great. But again, the county structure does not favor them in a manner to make long term decisions that will be transformative for this area because of the way the county board is set up right now. And also, there’s no guarantee Lisa is gonna run again. There’s no guarantee Monique wants to do this again.”

Wilson invited the Courier to drive around and look at the code enforcement violations along Veterans Memorial Highway and Mableton Parkway. The area is considered ripe for revitalization if given the necessary attention via planning and zoning.

“You can write all the code you want to until you’re blue in the face. The codes are there. The code violations that we’ll go see today have been there as long as I can remember. It’s about enforcement,” Wilson said.

Auto and tire shops are abundant in the area. Wilson drove past one business after another with tires displayed and stacked in the parking lots. Used car lots are overgrown and the vehicles are parked haphazardly. One side road is crammed with businesses stripping cars for parts. A small forklift picked up one of many cars that looked to have met a violent end.

Some of these businesses operate out of buildings that were built for another purpose. Tires are being changed at ground level in the parking lot of a former restaurant. Another is in the back of a building with an empty showroom that once contained furniture. An old exercise bike is the only item visible in the lobby of a 24-hour tire shop.

Lynn said there’s too much focus on the tire shops.

“If they looked around a little more and stopped focusing on the negative, they’d see a whole lot more,” she wrote in a Facebook post.

She also disagreed with the sentiment that Mableton doesn’t have activities and events.

“They talk about parks and wanting a sense of place. I do appreciate that, but this year they are starting a new Christmas festival downtown. There’s a Harvest festival. There are events going on…they talk about there used to be thriving youth sports in our parks. And it’s like, there are baseball, basketball, softball soccer programs for youth sports,” Lynn said.

Last week state Rep. David Wilkerson (D-Powder Springs) voiced his opposition to Mableton cityhood during a candidate forum hosted by the Mableton Improvement Coalition and Austell Community Task Force. He sponsored cityhood legislation in 2019, but was not a sponsor of Georgia House Bill 839 which succeeded in putting the referendum on the 2022 ballot.

State Rep. Erica Thomas (D-Austell) sponsored that bill and is vice chair of the cityhood committee.

“I have always opposed any cities being created. I did believe that if one city was going to have the opportunity to be discussed, the others should be as well. But I just want to make sure that I’m very clear that I do not support the city of Mableton. I actually oppose it, primarily because I believe the county is stronger together,” he said.

When asked about Wilkerson’s comments, Wilson replied, “He’s wrong about the taxes and the taxes going up. The numbers that we’re basing our message on came from a feasibility study conducted by the Carl Vinson Institute at the University of Georgia. Those numbers were given to them by the Cobb County government.”

He continued, “Everybody who’s critiquing the study, it’s like they didn’t read the first four pages of what it is and what it isn’t. But it’s easy to go in and pick out the numbers and say, oh yeah, this isn’t right. Taxes will rise because it’s a city.”

Galt Porter is the former chair of the Cobb Planning Commission and is now secretary of the cityhood committee.

Porter no longer lives in Cobb, but according to Wilson, he intends to return. The committee kept him on expecting it would invite questions–and it has. The opposition has been very critical of his involvement.

After the tour, Wilson stopped for lunch at Mexico Lindo on Veterans Memorial. It’s a rare sit-down restaurant in the area. Owner Oscar Lopez plans to add a rooftop deck, like the one at his location in the city of Smyrna.

“I am approved for a substantial amount and ready to invest in my business, but the gymnastics to get permits and approval from the county is holding me back,” he said. “I feel that Mableton and South Cobb need an economic boost. A city can make it happen.”

The Courier reached out to Chairwoman Lisa Cupid and Commissioner Monique Sheffield for comment, but did not receive a response.

For more information on cityhood:

From Preserve South Cobb Vote No To Mableton Cityhood

From the Committee for City of Mableton Gallery | Mableton YES!