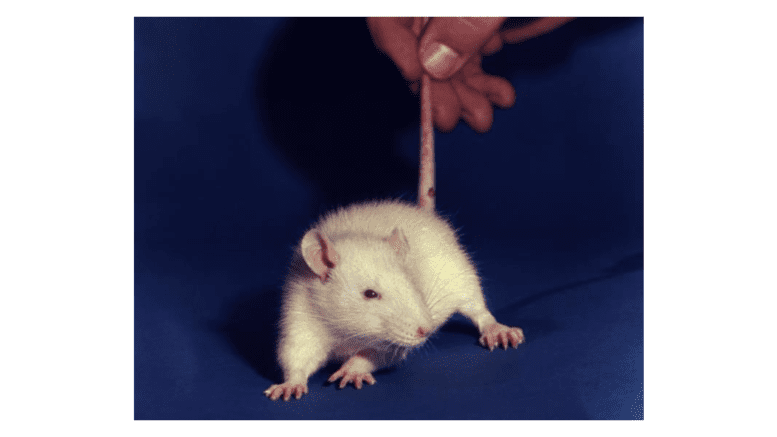 This image depicts a normal, pink-eyed, white rat, or Pink-Eyed White (PEW), in a laboratory setting. Though white, this rat is actually of the species, Rattus norvegicus, or brown rat, which through controlled breeding, had lost its brown color, becoming an albino animal. CDC/1970

by Lana Ruvolo Grasser, National Institutes of Health and Rachelle Stammen, Emory University [This article first appeared in The Conversation, republished with permission]

A proposed measure in Switzerland would have made that country the first to ban medical and scientific experimentation on animals. It failed to pass in February 2022, with only 21% of voters in favor. Yet globally, including in the United States, there is concern about whether animal research is ethical.

We are scientists who support ethical animal research that reduces suffering of humans and animals alike by helping researchers discover the causes of disease and how to treat it. One of us is a neuroscientist who studies behavioral treatments and medications for people with post-traumatic stress disorder – treatments made possible by research with dogs and rodents. The other is a veterinarian who cares for laboratory animals in research studies and trains researchers on how to interact with their subjects.

The 4 R’s of animal research

There is no single standard definition of ethical animal research. However, it broadly means the humane care of research animals – from their acquisition and housing to the study experience itself.

Federal research agencies follow guiding principles in evaluating the use and care of animals in research. One is that the research must increase knowledge and, either directly or indirectly, have the potential to benefit the health and welfare of humans and other animals. Another is that only the minimum number of animals required to obtain valid results should be included. Researchers must use procedures that minimize pain and distress and maximize the animals’ welfare. They are also asked to consider whether they could use nonanimal alternatives instead, such as mathematical models or computer simulations.

These principles are summarized by the “3 R’s” of animal research: reduction, refinement and replacement. The 3 R’s encourage scientists to develop new techniques that allow them to replace animals with appropriate alternatives.

Since these guidelines were first disseminated in the early 1960s, new tools have helped to significantly decrease animal research. In fact, since 1985, the number of animals in research has been reduced by half.

A fourth “R” was formalized in the late 1990s: rehabilitation, referring to care for animals after their role in research is complete.

These guidelines are designed to ensure that researchers and regulators consider the costs and benefits of using animals in research, focused on the good it could provide for many more animals and humans. These guidelines also ensure protection of a group – animals – that cannot consent to its own participation in research. There are a number of human groups that cannot consent to research, either, such as infants and young children, but for whom regulated research is still permitted, so that they can gain the potential benefits from discoveries.

In the U.S., the Animal Welfare Act protects all warmblooded animals except rats, mice and birds bred for research. Rats, mice and birds are protected – along with fish, reptiles and all other vertebrates – by the Public Health Service Policy.

Each institution that conducts animal research has an entity called the Institutional Animal Care and Use Committee, or IACUC. The IACUC is composed of veterinarians, scientists, nonscientists and members of the public. Before researchers are allowed to start their studies, the IACUC reviews their research protocols to ensure they follow national standards. The IACUC also oversees studies after approval to continually enforce ethical research practices and animal care. It, along with the U.S. Department of Agriculture, accreditation agencies and funding entities, may conduct unannounced inspections.

Laboratories that violate standards may be fined, forced to stop their studies, excluded from research funding, ordered to cease and desist, and have their licenses suspended or revoked. Allegations of misconduct are also investigated by the National Institutes of Health’s Office of Laboratory Animal Welfare.

Above and beyond the basic national standards for humane treatment, research institutions across 47 countries, including the U.S., may seek voluntary accreditation by a nonprofit called the Association for Assessment and Accreditation of Laboratory Animal Care, or AAALAC International. AAALAC accreditation recognizes the maintenance of high standards of animal care and use. It can also help recruit scientists to accredited institutes, promote scientific validity and demonstrate accountability.

So what impact do these guidelines actually have on research and animals?

First, they have made sure that scientists create protocols that describe the purpose of their research and why animals are necessary to answer a meaningful question that could benefit health or medical care. While computer models and cell cultures can play an important role in some research, others studies, like those on Alzheimer’s disease, need animal models to better capture the complexities of living organisms. The protocol must outline how animals will be housed and cared for, and who will care for and work with the animals, to ensure that they are trained to treat animals humanely.

During continual study oversight, inspectors look for whether animals are provided with housing specifically designed for their species’ behavioral and social needs. For example, mice are given nesting materials to create a comfortable environment for living and raising pups. When animals don’t have environmental stimulation, it can alter their brain function – harming not only the animal, but also the science.

Monitoring agencies also consider animals’ distress. If something is known to be painful in humans, it is assumed to be painful in animals as well. Sedation, painkillers or anesthesia must be provided when animals experience more than momentary or slight pain.

For some research that requires assessing organs and tissues, such as the study of heart disease, animals must be euthanized. Veterinary professionals perform or oversee the euthanasia process. Methods must be in compliance with guidelines from the American Veterinary Medical Association, which requires rapid and painless techniques in distress-free conditions.

Fortunately, following their time in research, some animals can be adopted into loving homes, and others may be retired to havens and sanctuaries equipped with veterinary care, nutrition and enrichment.

Animal research benefits both humans and animals. Numerous medical advances exist because they were initially studied in animals – from treatments for cancer and neurodegenerative disease to new techniques for surgery, organ transplants and noninvasive imaging and diagnostics.

These advances also benefit zoo animals, wildlife and endangered species. Animal research has allowed for the eradication of certain diseases in cattle, for example, leading not only to reduced farm cattle deaths and human famine, but also to improved health for wild cattle. Health care advances for pets – including cancer treatments, effective vaccines, nutritional prescription diets and flea and tick treatments – are also available thanks to animal research.

People who work with animals in research have attempted to increase public awareness of research standards and the positive effects animal research has had on daily life. However, some have faced harassment and violence from anti-animal research activists. Some of our own colleagues have received death threats.

Those who work in animal research share a deep appreciation for the creatures who make this work possible. For future strides in biomedical care to be possible, we believe that research using animals must be protected, and that animal health and safety must always remain the top priority.

Editor’s note: One photo depicting a species that is highly restricted for use in biomedical research has been removed from the article.

Letter to the Editor: Response to “What is Ethical Animal Research? …”