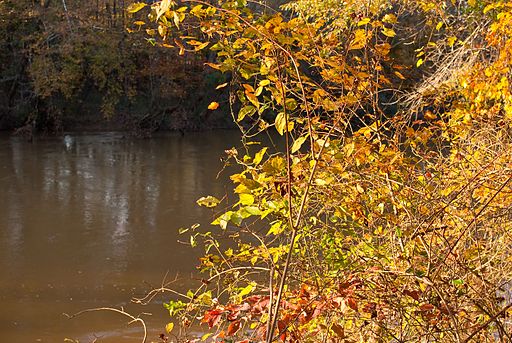 The man sat in the tree by the banks of the river, waiting patiently. He was thin, with wiry arms, well suited to climbing.  He was comfortable in the tree, and as long as he stayed in the woods near the river, the police would never catch him.  If they had bloodhounds he could use the river itself to elude them.  If the police didn’t have bloodhounds he would either take to the woods, where police who spent most of their time in towns or cities could never catch him, or take to the trees, jumping from limb to limb like a squirrel.  Either way, the woods and the river were his safe haven.

He heard the rustling of leaves.  Was it the police?  No, a few men with sacks slowly walked through the woods, picking blackberries.  He jumped from the limb, startling them, and ran into the woods.

The blackberry pickers alerted the police about the strange man in the tree, and the police suspected he was the man responsible for a series of burglaries and other crimes in Chattahoochee, Riverside, and Bolton, the three Fulton County communities along the Chattahoochee River.

The encounter with the blackberry pickers was in late June of 1945.  The police chased the man they called the “Roosting Man”, which the people in the community shortened to “Roosterman”, for three weeks.  Then he made the mistake of leaving the woods by the river.  They captured him in a nearby house, and charged him with multiple counts of burglary.

While in custody he told the press that he had been sleeping in the open, had a razor so he could shave occasionally, and bought food from African-American stores in sparsely populated areas, where he was less likely to be known.  The police described calling in officers and bloodhounds from all parts of the county for their several-week intensive hunt.

He was tried, convicted, and served one of the many prison terms in his long and colorful career.

William Grady Bagby, known as “Roosting Man”, “Roosterman”,  or “Tree Man”, was among the last of a breed of flamboyant and audacious career criminals who learned their trade during the depression era. He wreaked havoc on the border of Fulton and Cobb County where modern-day South Cobb Drive in Smyrna meets James Jackson Parkway between Riverside and Whittier Mill Village.  In the 1950s his partner in crime was his much younger brother, Hubert, also an accomplished escape artist, who was known as “the Ghost”.

Roosterman was frequently in the news, from the late 1940s until his death in 1968.

In the article about his death, an Atlanta Constitution reporter wrote, “The athletic Bagby could swing through the trees with the agility of a Tarzan. During many brushes with police, he took to the trees or the river in order to escape bloodhounds.”

The article quotes an unnamed old-time policeman, who said, “You let him get two feet away from you in the woods, and you might as well have been looking for a ghost.  He’d just naturally vanish into thin air.”

Bagby was born in Rome, Georgia in 1916 to Hunter Berry Bagby and Jennie M. Bagby.  At some point before 1940 their  large family moved to Chattahoochee, and Roosterman’s father and his then 16-year-old brother Vertice worked at Whittier Mill.

By 1940 Roosterman Bagby was already having frequent scrapes with the law.  He was convicted and sent to prison for “gaming” in 1941, released, and by 1942 he was back in prison for attempted larceny. Other prison stints over three decades included convictions for burglary, prison escape, abandonment, and possession of moonshine whiskey.

In 1957 Roosterman and his brother Hubert “the Ghost” were back in the news again.  In July of that year the older brother escaped from prison in Chatham county, and a few weeks later Hubert “the Ghost” lept from a police car in Atlanta, and disappeared again.  They had been captured the previous April while hiding in a chifferobe.

Hubert Bagby phoned the police a few days later, and said  he was tired of being a criminal, but “couldn’t stand the idea of being cooped up in prison.”

Roosterman was caught again in September, when he decided to catch a taxi at a cabstand in Riverside.  Nearby police recognized him, and he was recaptured.

The younger brother Hubert took to the river again, eluding police until March of 1958.  He was caught at his mother’s home on Bankhead Highway near Nickajack Creek in Cobb County.  He was curled up under his mother’s bed sleeping.

Both Bagbys served time in prison, and in 1968, William Grady “Roosterman” Bagby was killed by his brother Vertice in a fistfight.  Roosterman had been living with Vertice, and when they began fighting in the yard, Roosterman fell and hit a tree.  Vertice called an ambulance, but the older brother was dead by the time they arrived.

Hubert “the Ghost” Bagby died in Carrollton, Georgia, in 2014.

William Grady “Roosterman” Bagby, also known as “Roosting Man” and “Tree Man”, is buried at Riverview Cemetery, on the edge of the river he loved and called home for decades.

[The information in this article was taken from news articles from the 1940s-1960s, census reports, and prison records. Special thanks to Wendy Bagwell Cerkovnik, who grew up in the area where the Bagbys operated, and who first alerted me to this story]

2 Comments on "The Bagby brothers – elusive bandits of the Chattahoochee"