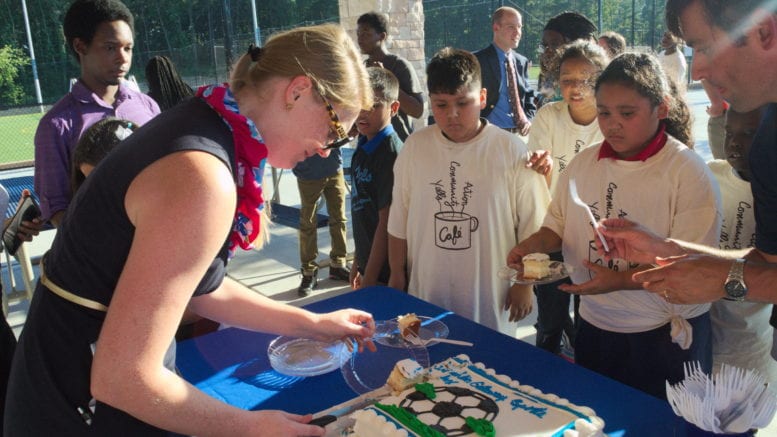 Lindsey Wiles with the city of Marietta cuts the cake for children of the YELLS program during the ribbon-cutting ceremony for the new sports complex. -- photo by Sierra Hubbard

Franklin Gateway Sports Complex sits on a total of 13.1 acres and features three soccer fields, a playground and a concession stand. More than six acres of the complex is composed of artificial turf, ideal for teams playing soccer or lacrosse.

The city broke ground on the project in October 2016. The building of the sports complex was part of an arrangement between Marietta and Atlanta United, the Major League Soccer team. Atlanta United built its training facility down the street, but the new sports complex will also be available to the team to rent for tournaments or larger events. 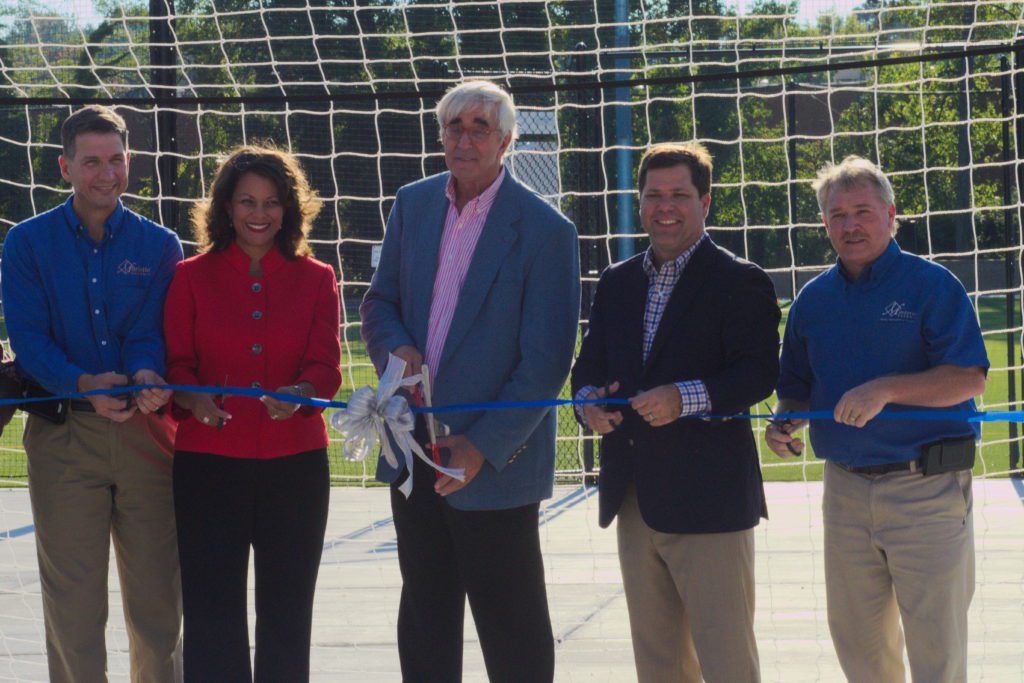 “Some people call them Atlanta United — we call them ‘Marietta United,’” Mayor Steve Tumlin joked during his speech.

The deal has brought new development to the area around Franklin Gateway, previously named Franklin Road, and the residents are seeing other improvements as well. Historically, the area hasn’t had a reputation for being safe, but Lindsey Wiles with the city of Marietta said crime has decreased by about 40 percent.

“Now you have Atlanta United and now you have our soccer fields,” Wiles said. “Hopefully more is headed this way.”

Youth Empowerment through Learning, Leading and Serving is among the organizations planning to use the fields. The group, better known as YELLS, is a non-profit based in the Franklin Gateway community that focuses on empowering youth and their families to be civic leaders. The organization was founded in 2008 and currently works with children in elementary and high school. “It’s exciting that there’ll be opportunities for the youth to get out and have a park that we’ve been waiting for for years,” said Laura Keefe, the executive director of YELLS.

Several students and parents in the YELLS program attended the ribbon-cutting ceremony, including Zacchaeus Johnson. He is a senior at Marietta High School and has been with YELLS for about three years.

“They treat you like you’ve been there all your life,” Johnson said. “It’s very warm and welcoming, and you get to meet people and learn new skills.”

Having access to a park may encourage children to be active and join a sport, Johnson said. He also liked that the younger kids can enjoy the playground while the teenagers use the soccer fields.

“There’s a lot of uses for the park for both YELLS and the community,” Johnson said.

Marietta is a growing city with a small-town charm