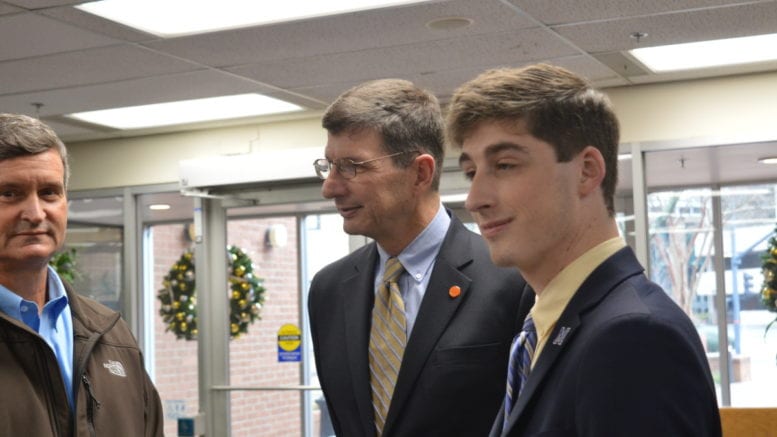 After a reception held Wednesday, Dec. 20, to honor its outgoing members, the Marietta City Council announced that IKEA is coming to Franklin Gateway, the newest in a line of developments for the area.

IKEA becomes largest retail company to ‘ever build in Marietta’

This will mark the second IKEA U.S. location in metro Atlanta, joining other top names and industry leaders in coming to Franklin Gateway. The Home Depot opened its technology center in 2015, and Atlanta United FC built a new training facility within the last year.

“The development we are announcing today is icing on the cake,” Bruton said. “It will be a huge contributor to the local economy, a jobs-creator, and a generator of overnight visitors to our city.”

The new businesses and headquarters in the area are a direct result of the city’s 2013 Redevelopment Bond, which it used to purchase run-down apartment complexes and a blighted shopping center. Once demolished, that offered land to incoming companies and a reason to look at Marietta for building new facilities.

“It is a community effort to attract such a major company,” said Marietta Mayor Steve Tumlin, “and we would like to thank everyone who has joined together to make this possible.”

The 300,000-square-foot IKEA location will occupy 34 acres and has the potential to bring hundreds of jobs, including the construction phase.

Tumlin said this shows that the redevelopment bond has created a domino effect in the community.

“The river has risen in a very positive way,” Tumlin said. “IKEA just puts an exclamation point on it.”

In addition to the announcement of IKEA’s arrival, the Marietta city council said goodbye to three of its outgoing members.

One of those leaving is Philip Goldstein, who’s served continuously for 37 years.

“I’ve been doing this for more than half my life,” Philip Goldstein said. “It’s something I’m going to miss, there’s no doubt about that.”

First elected in 1980, Philip Goldstein was only 21 years old and became Marietta’s youngest councilman. He believes he is a good example of why imposing term limits is not always the best approach.

“Knowing that we’ve done something before and it didn’t work…having that institutional knowledge helps,” Philip Goldstein said.

He pointed out that voters have the power to decide if they want someone in office or not.

“Each election is a type of term limit,” Philip Goldstein said. “It’s just not an artificially imposed term limit. It’s up to the voters.”

Taking his place and representing Ward 7 will be his son, Joseph Goldstein. His father said he is confident in his son’s ability to lead the citizens well and help people in the process. Joseph Goldstein said he told his father he wanted to run for office, and Philip Goldstein decided not to qualify for this election.

“I’ve known I wanted to do something in politics for a long time, as far back as I can remember,” Joseph Goldstein said. “My biggest plan is just trying to make sure that the citizens of Ward 7 are served, their voices heard, and that Marietta becomes the best place it can be.”

Two other council members lost their seats in the most recent election and said goodbye to the council chambers on Wednesday.

Fleming said he is looking forward to spending more time with his three young children.

Ward 5 Councilman Ruben Sands took office in July 2016 to fill a vacancy but failed to win the recent election.