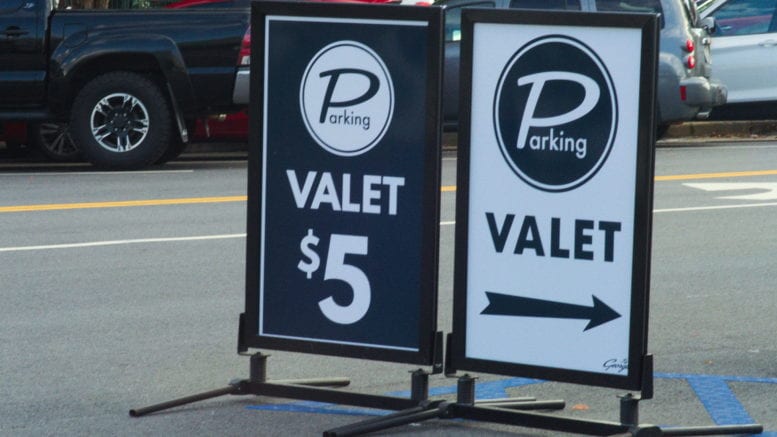 Visitors to Marietta Square might enjoy valet parking for a few more weeks if the city approves a proposed extension.

The last day of valet parking is currently slated for Saturday, Aug. 19. At its meeting Thursday, Aug. 10, the Downtown Marietta Development Authority voted unanimously to recommend an extension of the trial period by four additional weekends.

In May, Georgia Valet Services was approved for a 90-day trial run. Drop-off and pickup are located in the Root Street alley, which runs between North Park Square and Hansell Street. Cobb County gave the company permission to use the top floor of the Waddell Street deck to park the cars. The rest of the deck is still available for free self-parking during valet hours.

The trial approved valet services from 5 to 11 p.m. on Thursdays and Fridays and all day on Saturdays, but there were exceptions. Any special event on the square that closed off streets meant valet parking could not be offered.

These blackout dates were cited as one of the many reasons why Georgia Valet Services did not make enough money to cover its costs during the trial period. Business was negatively affected by holiday weekends, summer events on the square and inclement weather.

“Unless these numbers dramatically increase, there’s still going to be a shortfall,” said DMDA Chairman Thomas Browning. “I would like to see it work.”

A representative from Georgia Valet Services discussed several options with the DMDA, like improving its signage and visibility, eliminating service on Thursdays, and raising the price from $5 to $6.

The DMDA also voted to commit another $1,500 to Georgia Valet Services if the extension is approved by the city council.

“[City] council is the one that owns the streets,” said Alvin Huff, economic development project manager. “They still have to get permission from the city to put it on the street and from the county to store the cars.”

Huff explained that the trial is a good opportunity for the company to implement some of the ideas discussed during the meeting and improve business.

“We’re trying to make sure that the operation would be sustainable,” he said.

It’s not clear when the recommendation will be considered by the full city council, but Huff said they may try to get it on the schedule for Aug. 30.

Marietta to celebrate Independence Day on the Square July 3