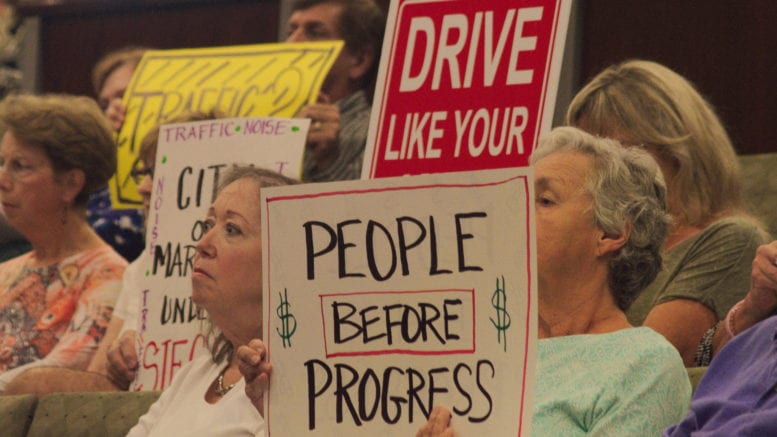 In essence, nothing has changed.

The Marietta City Council unanimously denied a plan on Wednesday, Aug. 9, that would have allowed taller buildings and mixed-use properties around WellStar Kennestone Hospital. Councilwoman Michelle Kelly abstained from the vote because she serves on the WellStar Kennestone Regional Board.

Currently, the area around the hospital is zoned for “office institutional use,” which only allows medical offices, pharmacies and similar structures to be built.

This plan, informally named the hospital overlay district, was first officially announced in April and would have allowed retail and residential developments in the area. It would have also enforced a new maximum building height of 175 feet on the majority of the area. An exception was made for spaces closest to existing neighborhoods, where the maximum height was only 50 feet or 100 feet.

At Wednesday’s meeting, several residents in the crowd held up signs that showed their disdain for the overlay district. Some handmade signs had speed limits written on them, indicating the concern about increased traffic in surrounding neighborhoods.

Roy Vanderslice represented these residents, most of whom live in the Lewis Park neighborhood. He expected a tougher fight at the council meeting.

“I thought there would still be some discussion about [the plan],” Vanderslice said. “I was prepared to bring up a few issues that I thought were pertinent.”

Those issues included the traffic concerns as well as worries about the increased building height. Vanderslice said he and his neighbors wanted to make clear that they are not against growth in the area, but they do want to see a better plan that includes the input of Marietta homeowners and residents.

“WellStar requests the Marietta City Council not approve the proposed new ordinance,” Haney said in the letter. “[We] would prefer to continue working with our Authority Board and government partners on future growth through joint planning.”

He also cited concerns about changes in the healthcare realm that often require specific floor heights to accommodate new technology.

“If height restrictions are imposed now, we could inadvertently harm our ability to deliver care in the future,” Haney said in the letter.

Councilman Andy Morris, however, did not believe that the letter had much of an effect on anyone’s vote.

“I was against the plan from the start,” Morris said in an email.

One of his main concerns was the fact that it would allow developers to bypass the typical process to request a zoning change or to build a new structure. He didn’t like the idea of a 175-foot building going up in the area without the city having much input.

Rusty Roth, Development Services Director for the City of Marietta, explained that this gives developers an incentive. There are already overlay districts in other parts of the city, and these districts don’t separate zones as strictly, so it’s easier for companies to build what they want in an area.

“In exchange for being able to do that without going through the rezoning process, they would be required to basically upgrade all of their buildings and sites,” Roth said.

“The hope was that some of that traffic would be alleviated by people being able to live near there and walk to work,” he said. “But you can’t predict what’s going to happen.”

He acknowledged that the residents’ concerns would need to be a focus of any efforts to revive the plan.

“If it were to come back up, there would need to be a larger component dealing with traffic,” Roth said. “I think that issue’s not going to go away.”

Though Councilman Morris is confident that the plan is dead, Vanderslice doesn’t believe the battle is over just yet.

“Things like this tend to resurface,” Vanderslice said. “So we have to be vigilant to be prepared to deal with it again in the future.”