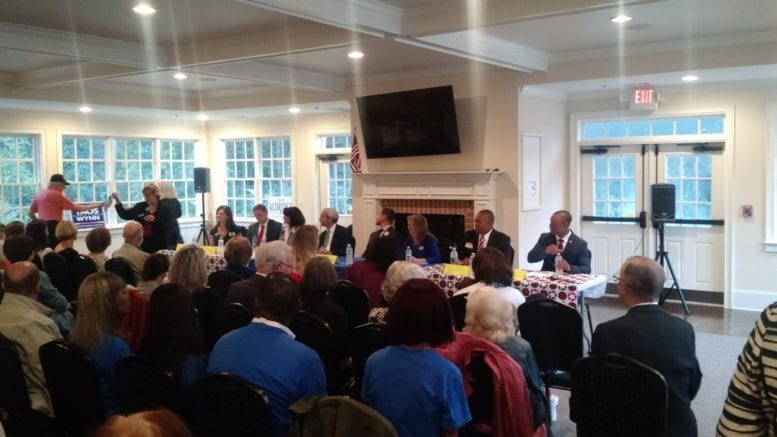 The eight candidates vying for Georgia’s open Senate District 6 seat shared a crowded stage Monday night at the Cochise Riverview Club in Vinings. A standing-room-only crowd was on hand for the forum, in which the candidates vied to separate from the pack.

To help readers distinguish who’s who, here is a breakdown of the candidates by party. The special election will be held Nov. 7.

The Republican candidates are:

Matt Bentley, an attorney with Bentley, Bentley & Bentley in Marietta.

The Democratic candidates are:

Republican Hunter Hill vacated the seat earlier this year to launch a campaign for Georgia Governor. He narrowly won re-election in 2016, edging out Howard by a 52 percent to 48 percent margin, one of the closest Senate district elections in Georgia last fall. Hillary Clinton won the district with 55 percent of the vote, meaning a Democrat may be able to pick up a win.

The district includes portions of northern Atlanta and Sandy Springs, as well as a swath of Smyrna and Marietta located mostly west of I-75 (a map can be found at this link). 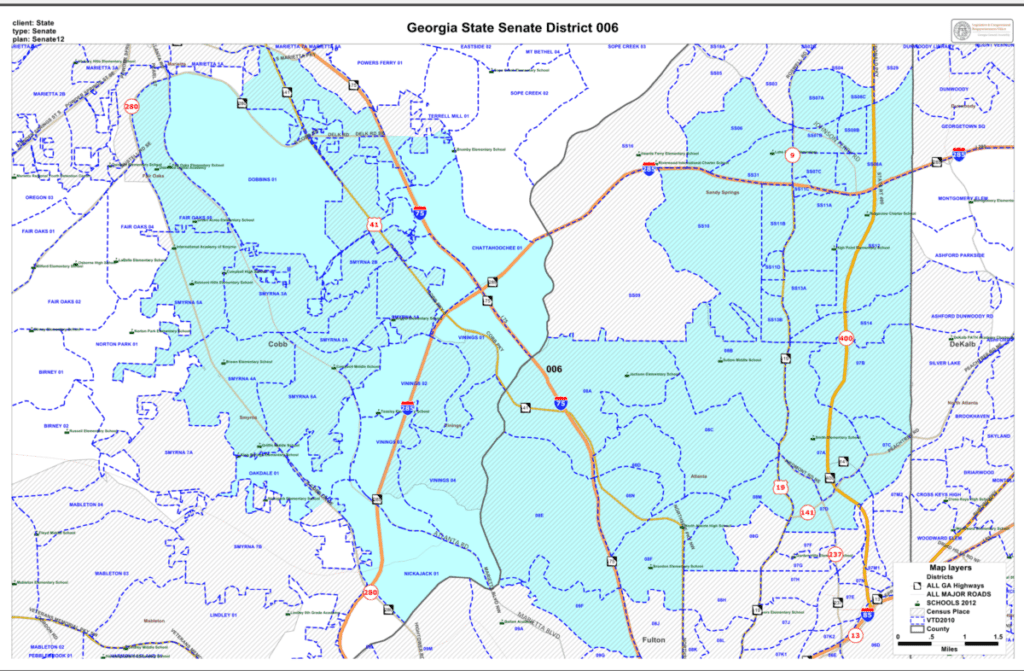 Because there were so many candidates present, there was only time for an introduction and four questions from the audience.

First up was Wynn, who described himself as an Emory University graduate and son of military veterans who is “an average citizen looking to represent average citizens.”

Eichenblatt described herself as a military brat and a 28-year Buckhead resident whose children attended The Lovett School and “universities all over the world.” She cited transportation as a major problem plaguing the district that she’d work to overcome.

Jordan (pronounced Jer-Dun) said she grew up in Dodge County, located an hour’s drive south of Macon, and attended public schools including the University of Georgia. She pointed out that, should Democrats overtake District 6, it will eliminate the Republican “supermajority” of two-thirds in the senate, creating greater balance in state politics.

Bentley began by thanking all the military members present for their serve and describing himself as a conservative Republican who is pro life. He added that he learned the value of hard work after earning less than $6 per hour at Chick-fil-A during his time at The Westminster Schools, and that if elected his top priority will be eliminating the state income tax.

Aldridge described herself as a Christian with three children enrolled at Westminster, as well as a healthcare advocate. If elected, she said her goals would include lowering taxes and increasing access to health care.

Howard, a Howard University alum and graduate of Atlanta Public Schools, said he’s active in the West End Church of Christ and added that he’d emphasize schools and transit if elected.

Fiveash pointed out that none of the eight candidates have held elected office before and that he’s worked in commercial real estate for 30 years. Fiveash attended public schools, as do his children.

Smith said he’d helped increase the number of African Americans in Georgia who vote Republican by 300 percent. He grew up in rural Virginia on sharecropper land, on welfare and living in Section 8 housing. Smith overcame those circumstances to graduate from Virginia Tech, and his children now attend Westminster.

The first of four audience questions concerned restoring the HOPE scholarship to fund 100 percent of tuition at public Georgia colleges. Each candidate who answered the question indicated they would support restoring the 100 percent scholarship. Jordan added that she’d support increasing tax deductions for 529 college savings plans as well.

Since multiple candidates indicated they’d support slashing or eliminating the state income tax, the second question concerned how they would make up the funding gap. Howard answered that he’s not in favor of eliminating state income tax as it disproportionately hurts those with lower incomes, adding that 60 percent of Georgia public school children receive free or reduced lunch.

Fiveash said he’d support reducing state income tax, but not totally eliminating it. Bentley proposed raising sales taxes to make up the difference, which he said would encourage saving and allow consumers to decide what to do with their income.

The third question was about schools. Since so many candidates either attended private schools or send their children there, a woman asked what the candidates’ plans are for the vast majority of people in the district who can’t afford Westminster’s $25,000 per year per child tuition. The question drew applause from the audience.

None of the candidates addressed the question directly, but each shared their ideas for improving public education in Georgia. Eichenblatt said she wants to emphasize Pre-K funding because childhood learning is a strong predictor of later success. She also advocates school choice through programs like charter schools.

Aldridge also encouraged early childhood learning, especially by parents inside the home who can teach vocabulary to children aged three and younger. She acknowledged that up to 80 percent of Georgia’s children are educated in public schools and said she’s an advocate of school choice. Smith also said he’s an advocate of charter schools.

The final question concerned whether or not the candidates would support a “religious freedom” bill, which has been proposed but not passed in recent years.  There was little separation between the candidates on the issue, even along party lines.

“This is a wedge issue that is used to divide us,” said Jordan, who is against religious freedom bills. “Y’all want Amazon? They’re not going to come if we pass this.”

Howard said the bills are unnecessary and bad for business, while Fiveash suggested asking everyone in North Carolina how its religious freedom bill has affected the state. Only Smith indicated he might support such a bill, saying he opposes all discrimination, “including discrimination against people of faith.”

A second candidate forum is planned for Oct. 17 at Northside Church in Roswell before election day.