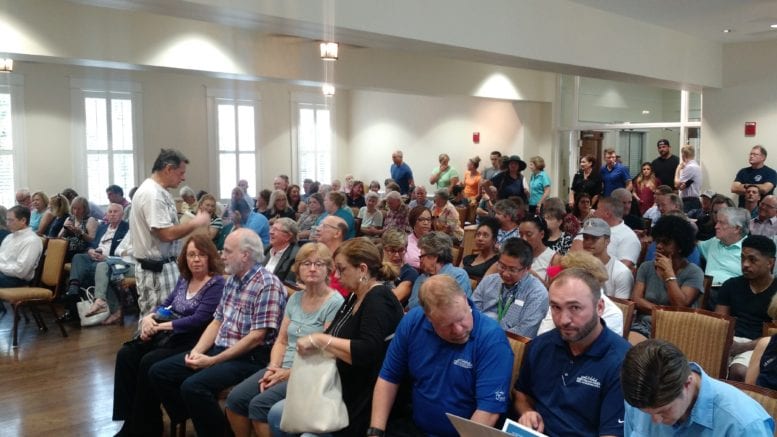 Developer PulteGroup apparently got the message when its representatives got an earful from some 200 locals about a proposed townhome development back in August.

“That application was withdrawn this past Friday,” Stoner said. He added facetiously, “Just wanted everyone to be aware of that, and you can stop sending me emails.”

However, Pulte or another developer could still submit another proposal in the future.

The townhomes would have replaced three homes, two built in 1928 and one built in 1913, between the Reed House and Charter Bank at the southwest corner of Atlanta Road and Concord/Spring roads.

On Aug. 2, a town hall meeting was held at Brawner Hall to inform locals of the proposal. An overflow crowd showed up, causing the meeting to start 15 minutes late so extra chairs could be brought in.

The response was overwhelmingly negative, with attendee Mary Joe Franchini summing up the sentiment in saying “what can we as homeowners do to convince you that we don’t want this?”

Residents voiced concerns over traffic, privacy, the historic nature of the area, and density.

“[Pulte] did not give a formal reason, they just said they were withdrawing the application,” Stoner said Monday. “Obviously I suppose that when we had 200 people show up at the town hall it was made loud and clear that the product they were proposing was not received well by local neighborhoods.”

Smyrna’s city council was originally scheduled to vote on the proposal Sept. 18, but the plans were first delayed and then withdrawn altogether. Stoner noted during the town hall meeting that due to the location the properties are likely to be redeveloped in some form eventually, but it appears that won’t be through the townhome development proposed by Pulte.

“I want to thank everyone who participated in the town hall meeting and who I corresponded with via email,” Stoner said. “Everybody behaved in a very civil and responsible manner, and that’s the way it should be.”

Preservationists clash with developer over Civil War fortifications in Mableton