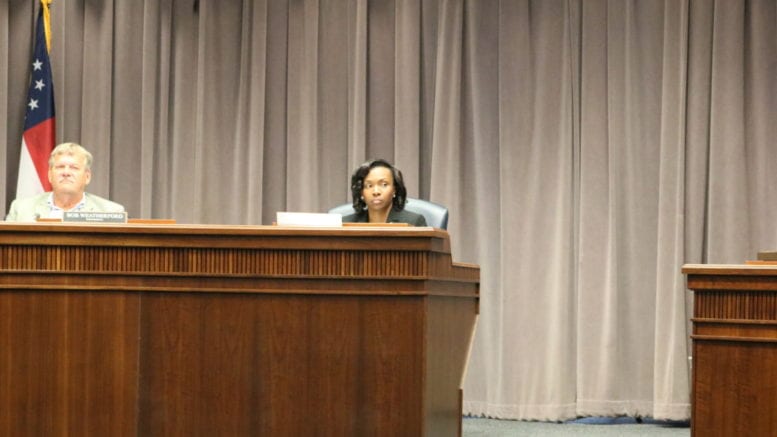 Park on Chattahoochee is still without a name

At Tuesday morning’s Cobb County Board of Commissioners meeting, the controversial naming of a new park on the Chattahoochee River in South Cobb was postponed again. The decision has been deadlocked over a proposal that arose during the discussions to name the park “Johnston’s River Line Park,” a reference to Confederate General Joseph Johnston, who had authorized the construction of a series of fortifications called “shoupades” along the river. Many residents had objected to including Johnston’s name on an area park.

A compromise name was proposed by the Mableton Improvement Coalition and the River Line Historic Area which removed the name of Confederate general Joseph Johnston from consideration but kept the reference to the River Line.  Under that plan, the park would have been called “Mableton’s Chattahoochee River Line Park.”

Sharp reaction to comments on slavery

District 4 Commissioner Lisa Cupid had a sharp reaction to comments East Cobb resident Mary Stevens made during the public comment section.  Stevens argued in favor of naming the park after Confederate general Joseph Johnston.  She led off by defending the treatment of slaves in the south. saying that the number of freed slaves increased in the south between 1790 and 1860.  Stevens said,  “Had it been so bad for the freed slaves, they would have left the south.” She also said there were white slaves, too.  Regarding Joseph Johnston, she said,  “The Atlanta area was invaded. So General Johnston, like any one of us in this room, would defend his homeland, and try to fortify their homeland any way they could.”

Cupid said in response, “I was deeply offended by some of the statements that were made this morning by the previous speaker. I’m not here to refute the fact that there may have been slaves other than persons who are African-American.  But there is numerous documentation and historical evidence that the chattel slavery that blacks were subject to in America was not comparable to that of any other race. And I also want to address the point that had it been so bad for slaves they would have fled the south.  I find that statement also equally offensive.  And this is part of the reason that there has been a move toward finding a neutral name for this site. I can only imagine for those that live in the area, the level of offense that they might take beyond the level which I’ve taken just now.”

When asked by the Courier after the meeting why the naming of the park had been postponed, Cupid mentioned the compromise plan devised by the Mableton Improvement Coalition and the River Line Historic Area, and said, “I had concerns that that wouldn’t necessarily be a broad enough representation of the perspective of the residents that are in District 4.  Let me at least give them time to digest the name before we just put it out there and approve it.  And let’s take into account that there could be varied perspective.  I recognize the work that (the Mableton Improvement Coalition) does in representing the community, but there still may be voices out there that were not heard in that mediation process.”