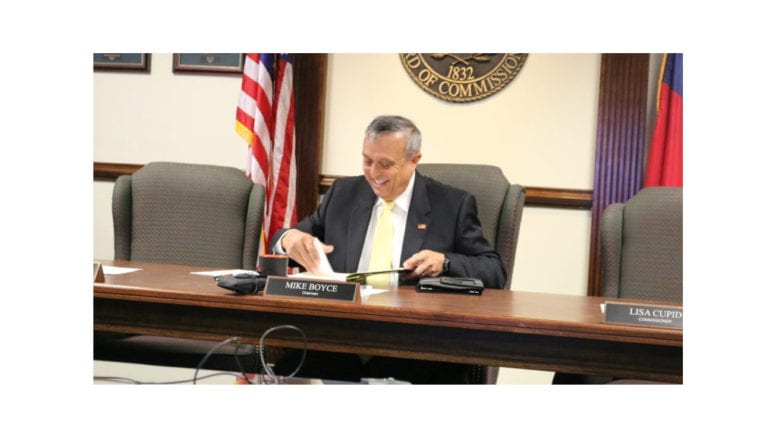 The Courier had a conversation with Mike Boyce, chair of the Cobb County Board of Commissioners, at Cool Beans Coffee Roasters on Marietta Square. We talked about his campaign for a second term as chairman.

Why did you decide to run for a second term?

“Because my wife recently became a Master Gardener and need to pay for her hobby (laughs). It’s the most expensive hobby I’ve ever had, but if it keeps her happy, I’m happy,” he said

He said, “It’s going to be very complicated, it’s going to take a lot of time.  But I believe that my approach is the approach that will work, (and) that in 2022 when we have the referendum, that this time we’ll successfully have something that the voters will support.”

“So it might be a little bit of arrogance in that,” he said “but I’m just comfortable with the approach, and I have the energy to do that, and it’s going to take it. “

“You’re going to have to spend a lot of your time out of your office, going out and going to various forums to make sure they understand what it is that we believe we hear from them, and we go back and vet that, to make sure that we heard it correctly, and then get the right wording on the ballot, and then push it across the  goal line,” he said.

You’ve become known for the town halls. Why do you think they’re effective?

“The second thing, though, is that my experience has been that it’s a conversation.  I sort of let it be a testing ground for me,” he said, “Because we would have  missed the issue on compensation for public safety, without the town halls. That was the issue that came up this year.”

“Last year it was about  the amenities.  There was a rumor that we were closing a lot of our facilities here, which was simply not true, but it was an opportunity for me to get out there:

A. to engage the public and tell them what it is that we were trying to do, and

B., I needed their support and would they please write the commissioners to help them so we can vote on it last summer, and it worked. “

“In the case this year,(in regards to) public safety,” he said, “we would have addressed the compensation somewhat, but not to the degree that it need to be done.”

“And the town halls showed that.  So to me it’s a source, to make sure that what we’re proposing in our budget is the right thing.”

“It gets a conversation started very early,” he said, “and doesn’t turn into a crisis at the end of the budget process when  have to have something passed by the end of the summer.”

“So I think the town halls are one of the most important ways to ensure that we are hearing correctly that what we are doing is something that the public’s going to support,” he said.

“Being an elected official,” he said, “I believe, deep down inside that people want us to make the hard call. But they need to believe that they are a part of that call. So when we make the call, they all understand where we’re coming from. And the call is a lot easier when we sense what we’re doing is the right thing to do.”

“But there are times when there’s a higher calling.  Nobody wants to have your taxes raised.  Let’s be realistic.  No politician wants to raise taxes.  But we have a higher responsibility to ensure that we deliver the services to everybody in the most cost-effective way possible using our tax dollars. And if a tax raise is required, then that’s the kind of call we have to make. And we made it last summer.”

What’s your least favorite part of the job?

“I don’t know if it’s my least favorite, but Sam Olens told me the most difficult part of the job is zoning, because it’s a zero-sum game. And there’s always winners and losers,” he said. “But I think we’ve found a way with zoning now to have a middle ground. So I think I’ve been a bit more lucky than Sam on that.”

“And you have to be able to be responsible enough and mature enough to realize that even though the mode of delivering it wasn’t the way you’d prefer to have it done, they have a point, and you have to find a way to address that … and to come back respectfully.”

“So, quite honestly,” he said, “I look at this job in some ways as a real call for my spiritual walk.  We talk the talk and I gotta walk the walk. So you have to love your neighbor. Sometimes (laughs), not very often, you have to really stretch your heart.”

What’s your favorite part of the job?

“Oh, the people.  No question about it.  I mean, the people in this county are wonderful. Whenever you go out and you go to an event, first of all you’re educated, but secondly, the passion that people have in this county for their hobby, or their organization, and the things that they do to make that happen, we’ve got to take the hat off to them,” he said.

“So yeah, there’s no question about that.  Just going out and meeting the people here in the Cobb community, learning from them, and letting them knew that ‘Hey, I really appreciate you’re doing this’, and it’s a lot of fun, too.”

What is your top priority for a second term?

“Transit and transportation,” he said. “Absolutely, no question.  That is the issue on the table. Look, I don’t need a study to know we got a traffic problem in the county.

“And we have a process in place, called the Comprehensive Transportation Plan revision, and I believe … the big players in this are invested in making sure that we’re all speaking in the same direction, and marching together.”

“But it’s going to take up half of the new term.  No question about it,” he said.

Other than transportation, what department needs the most focus?

“Not just the police have this issue,” he said, “but the District Attorney’s office, so does the judicial branch, and they’re all feeling the pressure of we have more and more people here in the county, and fortunately not a great number of them come into the judicial or public safety system.  But there are more of them that are coming, and it’s a lot more sophisticated approach to public safety and that (requires) resources.”

“Fortunately we live in a county that is going to have the tax digest that we can address additional revenue from the tax digest increases, if we address these incrementally,” he said.

“But we’re not going to be taking big bites out of the apple. This is a very conservative county, I made a commitment not to raise the millage rate, and I believe that we can address all these problems, but it has to be over a five year period. It’s not going to be overnight.”

One of the things you’ve emphasized is transparency. Why is that?

“First of all, I believe in the American people.  And if you give them as much information as you can, they’ll help you make the right decision. Secondly, the trust is very thin,” he said.

“It doesn’t take much for people to lose trust in you. And sometimes, in our world, it only takes one action. That action is so egregious that you may never repair it. So I’ve emphasized to the staff and to Rob Hosack, and to my commissioners: no surprises.  Because when you do that, what that allows you to do is you can start the conversation.”

He said, “And even though the conversation may start off in a way that ‘Whoa, I never saw that!,’ at least you can finally have a conversation and over time, come to some sort of middle ground discussion on it. So I believe that we have nothing in this county to hide.  Nothing.  We don’t have nuclear weapons here, we’re not hiding anybody that I’m aware of under some guise, there’s just nothing in this county government that you should keep secret. “

“There are some processes that by law we have to show discretion about, but the law allows us to do that in executive session, very specific about that,” he said.

“And I can tell you right now, these commissioners, they adhere to the spirit and the intent of the law.  Four of them are on the same hallway together, and I’m telling you, When I’m talking to someone in the doorway, and another commissioner comes out of her office, and they see me talking to them, they don’t come down to the office, because that’s an informal quorum.”

“They really get it,” he said, “and it starts at the top, and goes down to the bottom.”

“So my line is, given my past experiences as a Marine, and working both overseas and at the Pentagon, there are some things there you don’t want to talk about..  I’ve never seen anything in this government that reaches to that level.”

“This is the first time … I’m new to this game.  I won because I believed in grassroots, but reelection campaign is totally different, because my concern is I still have responsibility to the taxpayers to do my job,” he said.

“So how do I do that and still campaign?  This job owns me, but I have to find time to get out there and do what I did before, I have the benefit, (laughs) or not, of a record to run on, but I just want you to know that I’m still feeling my way through this campaign idea, of ‘how do you get reelected?’ but still do your job. So it’s going to be interesting here over the next year. Because. you know, the primary is next May.”

“And after January when we get back into full campaign mode,” he said, “I’m going to have to find some way to balance all that. So my guess is I just don’t sleep (laughs).”

700 remaining absentee ballots to be counted in Cobb