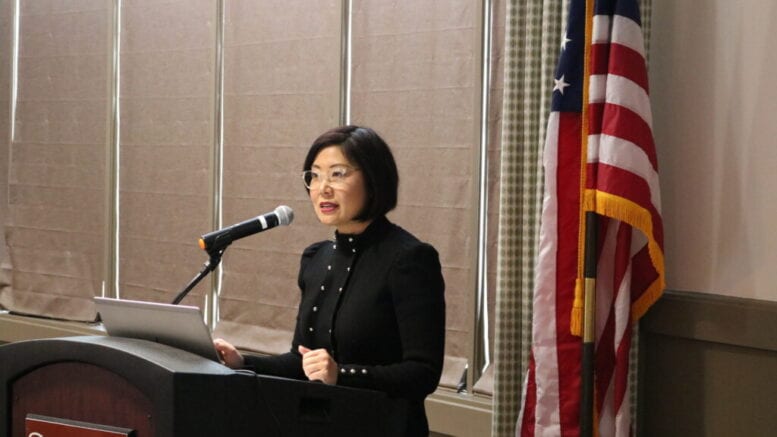 A room full of community health professionals, social workers, agency officials and community leaders met at the Smyrna Community Center on Jan. 22, 2020 for the first meeting of the Community Action Network, formed to help organize community support for the Healthy Start program.

Healthy Start, funded by a federal grant to Cobb & Douglas Public Health (CDPH) aims to reduce the disparity in outcome of childbirth between African-Americans and other demographic groups in Cobb and Douglas counties.

Healthy Start tackles the problems of low birth-weight babies, infant mortality and maternal mortality, which are more common among African-American women than among other large demographic groups.

“When you think about the county and you think about infant and maternal mortality, Cobb County is probably not the first place that you think of,” she said. “But we have a tale of several different cities.”

“And so when you look at our East Cobb area and you look at areas around the South Cobb area, we see a lot of disparities,” she said. “And you might have heard these terms of health equity and health and racial disparities or health disparities. This is a perfect example of that.”

She said African-American women in particular were affected by this disparity.

Deanna Crosby, an epidemiologist at CDPH, gave a presentation on the statistics Healthy Start is trying to improve.

She said that a low birth-weight baby weighs less than five pounds, eight ounces. The average weight of a child at birth is eight pounds, she said.

Low birth weight leads to a higher possibility of mortality, she said, and in Cobb County African-Americans accounted for more than half of all low birth-weight infants.

Delicia Watkins, RN, who is the Healthy Start Program Manager, gave an overview of the program.

She began by talking about one client of the program in particular.

“So I want everyone to meet Bridget. She’s like a lot of the women that we encounter daily at our Healthy Start Program,” Watkins said.

“She’s 20 years old, she’s unemployed, and she recently relocated to Atlanta with her her partner who she lives with. Her family is all the way in Chicago. She was very shocked when she found out she was pregnant,” she said. “She had no idea how she would navigate the healthcare system or even how to afford health care.”

“She is unaware of what resources are available to her. She often says she doesn’t know the first thing about a baby let alone how to care for herself during pregnancy,” Watkins said. “Basically in a really overwhelming situation, with no local family support, Bridget could easily end up a statistic or she could get connected with a Healthy Start Program.

“Our team consists of registered nurses and care coordinators who are passionate about working with pregnant women. I would like to share with you guys some of the critical services that we provide in our program,” Watkins said.

“So first, we focus on prenatal education. We utilize evidence based curriculum, so mothers are empowered with the knowledge to successfully navigate the healthcare system, as well as an advocate for themselves,” she said. “Some areas of focus are the importance of prenatal care, the physical and emotional changes that accompany pregnancy, breastfeeding and childbirth.”

“Once the baby is born,” Watkins said, “we offer postpartum education. Mothers are educated on emotional changes, parenting roles in care of the newborn.”

Facilitator Ron Chapman then had the audience break into groups of three for a work session aimed at identifying the community needs creating barriers to the goals of Healthy Start, including transportation, literacy training, and behavioral health services.

Healthy Start — an attempt at a solution

The mailing for the event described the program as follows:

Healthy Start is a voluntary no-cost home visiting program that provides a personal health team consisting of a Registered Nurse and a Care Coordinator for pregnant women and their babies up to the age of 18 months. The focus of the program is on education, care coordination and referrals to community resources. The goal is to decrease maternal and infant mortality rates, low birth weights, and preterm births in the African American populations of Cobb and Douglas Counties.

Healthier Generations Is a comprehensive program designed for dads and expecting fathers who wish to learn more about responsible fatherhood skills, traits and practices over a three-month program cycle. The focus will be on strengthening family resiliency, fatherhood involvement, and knowledge about parenting skills. These sessions take place Wednesday evenings at the South Cobb facility and include gift cards and a hot meal. All eligible dads are encouraged to participate in this program!

Cobb & Douglas Public Health received a grant of $1,092,899 per year for five years from the Health Resources Service Administration to implement the program.

The Community Action Network initiated by Cobb & Douglas Public Health was set up to provide support for Healthy Start, but according to the Jeffry Kuehl, Grants Specialist at CDPH, the focus of CAN is broader than just the immediate program.

“The CAN should work to address priorities other than low birth weight, infant mortality and maternal mortality,” he wrote in an email to the Courier after the meeting. “Those three areas are directly addressed by the Healthy Start staff or contracted employees.”

“The CAN was given a list of priorities that came from initial assessments of healthy start clients and their exit surveys.  One thing almost all of our clients deal with transportation issues. In order to deliver healthy babies, we need to get mom to her doctor appointments,” he wrote. “The CAN should have a separate life of it’s own.  I am hoping the priorities of the CAN change as action teams work to meet goals that lead to healthier babies, moms, and dads.”

Kuehl wrote in the email, “The money we receive can be used for supplies, marketing, staffing … We are required by the government to convene a Community Action Network. Since public monies are being used to fund the program, there needs to be some sort of advisory council/advocacy group formed that represents the community . My goal was to not only to bring in a group of people who were diverse in ethnicity, but also in occupation and social focus. “

The next CAN meeting

The next meeting of the Community Action Network will be held Tuesday March 3 at the Smyrna Community Center, 200 Village Green Place in the Magnolia Room. All are welcome, but you should RSVP to Jeffry Kuehl at jeffry.kuehl@dph.ga.gov or 678-385-1367 by Feb. 18.