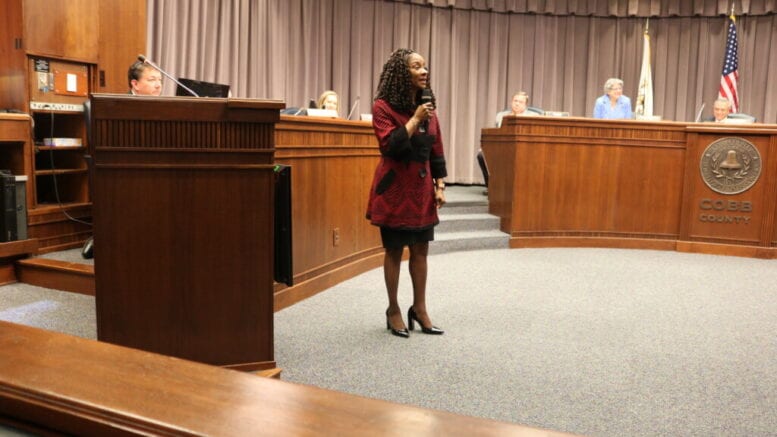 Dr. Jackie McMorris was approved as the new Cobb County manager after a 4-1 vote at Tuesday night’s meeting of the Cobb County Board of Commissioners.

District 4 Commissioner Lisa Cupid, who opposed the appointment on the basis of the process followed in making the decision, said, “I think the world of our Deputy County Manager Jackie McMorris … she will make a fine county manager.”

“It disheartens me that we are put in this situation today,” said Cupid.

Reasonable processes in hiring key department, division or agency heads in Cobb County has typically meant that we have applied at least one of the following acts:

“We have discussed the open position with the county manager.

“We discussed possible positions with the hiring manager,

“(We) discussed the open positions of candidates with commissioners in an executive session.

“We had HR review and narrow down the pool of candidates.

“We have an interview of top candidates through a committee.

“And we have the county manager also interview top candidates that have been narrowed down.

“We have the county manager forward top candidates to the BOC for review.

“And the Board of Commissioners interviews the candidates with the HR manager and the hiring manager.

“I firmly believe that if we were to appoint the county manager in the fashion with which it’s been presented, that there would lack a reasonable process for the board to have constructively discussed the appointment collectively, and with reasonable time constraints that is commensurate to the level of authority, influence and responsibility of this role,” Cupid said.

In response to Cupid’s statement, District 2 Commissioner Bob Ott said, “I want to speak on my own behalf, I don’t need someone else to tell anyone how I as a member of this board feel.”

“But we do not need to drag a wonderful person, a highly qualified person, highly educated through the mud. She doesn’t need protection from anything. Her record, her eduction, her job performance speak for themselves,” he said.

“You want to talk about the cream floating to the top?  She’s the creme de la creme.  I have no reservations about supporting Dr. McMorris to be the next county manager,” said Ott.

District 3 Commissioner JoAnn Birrell said she agreed with Ott, and said, “When the chairman first approached me, I agreed that Jackie is the only choice for this position.”

The appointment was approved 4-1.

She then earned her EdD in adult education at the University of Arkansas in Fayetteville.

The resolution proposing the appointment

The following resolution was put forward proposing the appointment:

WHEREAS, Dr. Jackie McMorris (hereinafter “McMorris”) has in various leadership capacities for Cobb County, Georgia (hereinafter the “County”) for the past eight years including Deputy County Manager since October 2017; and

WHEREAS, the County Manager position is of critical importance to the County, and it is desirable that an effective transition in leadership occur; and

WHEREAS, McMorris’ authorized legal representative has presented an employment agreement for consideration in accordance with the Board of Commissioner’s direction.

WHEREAS, the County and McMorris mutually desire an Employment Agreement through December 31, 2023.

NOW THEREORE, the Board of Commissioners resolve as follows: