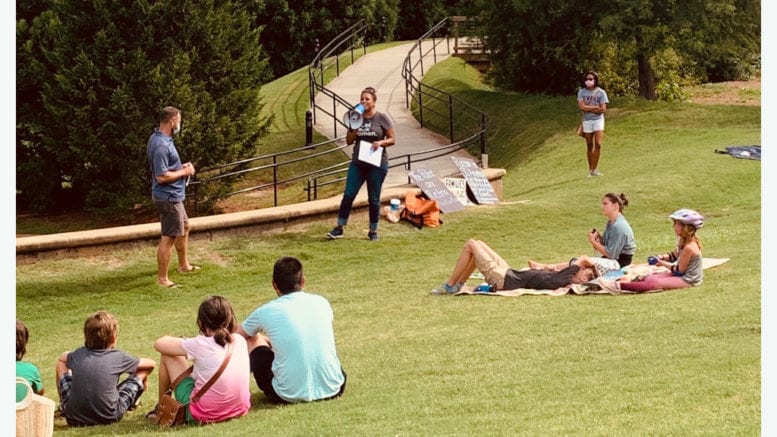 Families Against Racism along with Cobb County School Board member Charisse Davis hosted another discussion on race in Taylor Brawner Park in Smyrna Sunday afternoon.

About 50 to 75 people showed up with their families to sit in the park. Presenters were Davis and Families Against Racism member Matt Martin. Board member Dr. Jaha Howard, who normally co-hosts these events, was unable to attend.

Families Against Racism describes itself as “families, of all backgrounds, coming together to take action against the racism that pervades every aspect of American life.” It began in Cobb after the police killing of George Floyd in Minnesota.

Davis said that she hoped the families in attendance had already been having difficult conversations surrounding race with their families, neighbors and friends. She said that families should listen to Black people’s voices and be an ally to those speaking up about racial oppression.

Davis said that within the last months and weeks, more people are coming forward to talk about their experiences with race in Cobb schools. Specifically, she said students at Walton High School, the school she represents, are coming forward with stories of racism.

During the event, Martin read the story of a Black woman student who graduated from Cobb County schools a few years ago.

“I can specifically recall one instance when I was in eighth grade when an English teacher tried to prevent me from applying to the high school magnet program I later graduated from with honors,” Martin read. “Telling me directly at the time that he planned on speaking to the magnet director to keep me out of the program.”

This student also wrote that while being one of the few Black people on her tennis team, her skill level was questioned by other coaches.

She also said she only had one Black woman teacher while in Cobb schools and that no support system existed for her in school as Trayvon Martin, Philando Castile and more Black people were killed on live television.

Sunday’s event comes after the heated Cobb Board of Education meeting Thursday, June 25.

During that meeting, board member Randy Scamihorn said that systemic racism does not exist in Cobb schools while Superintendent Chris Ragsdale would not say “Black lives matter” when Davis asked.

Ragsdale cited the Golden Rule of treating others how one would like to be treated. Davis addressed this during the event.

“It was so important that our leadership was able to say [Black lives matter],” Davis said. “And he was not able to. [Ragsdale] believes that we just need to be nice, we need to follow the Golden Rule … being nice, has that helped us solve racism? No. It hasn’t forever, and it’s not going to.”

Davis said a plan must be taken to end racism and showing up at the park is a start, but not enough. She encouraged the crowd to think about what they can do to end racism going forward.

“Surely the superintendent of a district that’s 60+ percent students of color can say that surely Black lives matter to him,” Davis said. “He wasn’t able to do it. I knew that just asking him and seeing what his reaction would be would say volumes. He just believes that we need to be nice to each other … being nice doesn’t help our kids to feel any more welcome in our schools. You can be nice and be racist, all day long.”

Davis pointed to the call to action she and Howard drafted and sent to board colleagues Wednesday, June 10, as the way to make lasting change with regard to race in Cobb County.

Bacon bows out of reelection bid

Protests in support of KSU cheerleaders who “take a knee” continue