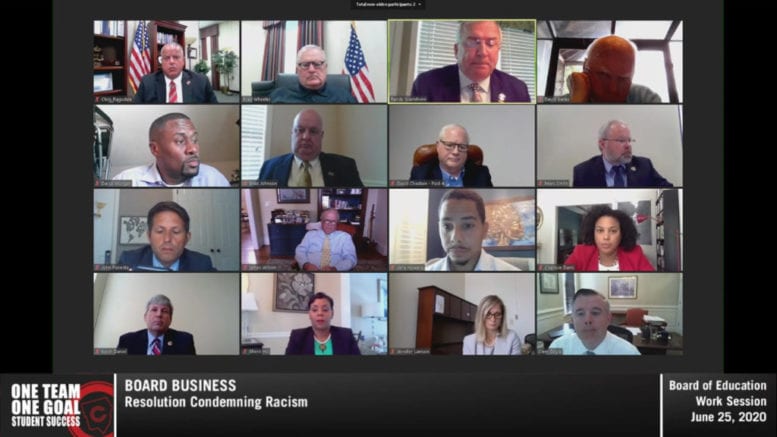 Screenshot of the Cobb County Board of Education virtual meeting

>> watch the video of the meeting by following this link

Board member Randy Scamihorn presented his version of a resolution condemning racism for the seven members to amend and vote on.

Before Scamihorn presented his resolution to the board, board member Charisse Davis asked Cobb Schools Superintendent Chris Ragsdale if he was willing to say “Black lives matter.”

Ragsdale did not say it and instead cited the Golden Rule of treating others how one would like to be treated.

Davis talked about parents and students who come to board meetings to address their experiences with racism in Cobb schools. She said citing the Golden Rule is not helping those people.

Ragsdale said that protocols are in place at Cobb schools if somebody breaks any of the rules.

“Just as we’re a country of law and order, this organization has rules of operation,” Ragsdale said. “When those rules are violated, regardless of who it is, we’re going to follow those.”

Later, Scamihorn read his resolution to his colleagues. Board member Dr. Jaha Howard asked Scamihorn what board members Scamihorn had consulted about drafting the resolution before today’s meeting.

“I’ve talked to everybody, including [Howard], on the phone except for Ms. Davis,” Scamihorn said. “Ms. Davis did not call me so I assumed she didn’t have any comments.”

Scamihorn did not answer Howard’s question, and said that there was no draft, but a resolution. Howard moved on.

In a Courier article last week, Davis was quoted as saying that she and Howard drafted a call to action addressing systemic racism in Cobb schools.

Davis said that none of her board colleagues ever responded and that board members had received an email after she sent the call to action, stating that Scamihorn would be drafting a resolution condemning racism.

During the meeting, Davis told Scamihorn she responded to his resolution email with questions and comments but Scamihorn did not respond to her. She also said that Scamihorn’s resolution does not address racism in Cobb.

“Something happened that made the entire world start protesting,” Davis said. “It was the death of a Black man at the hands of a police officer. So the tragic events that are even referenced in your resolution, what events are we talking about? We’re not even mentioning [George Floyd]’s name.”

Davis said Scamihorn should reconsider putting his resolution up for a vote.

Scamihorn responded by saying the portion of the resolution that says the county stands with all its citizens against racism addresses racism in Cobb.

“This resolution condemns racism whether it was 1,000 years ago or 1,000 years hence, rather than singling out a specific thing,” Scamihorn said. “Though you [Davis] weren’t old enough, I was old enough to watch in horror, in the 60s as a young man … things that were happening back then that guide us to where we are today. Do we have more to do? Much more, yes.”

Scamihorn said he went through the “policies that you [Davis] complain about” to create the resolution. He said he hoped the board could unite to vote for his resolution.

Howard directed his comments toward Scamihorn and told him none of the Black members were asked for their input or to discuss Scamihorn’s resolution.

Scamihorn interrupted Howard, saying that Howard was not telling the truth. Scamihorn said he sent the resolution through email to all board members to respond to.

“Literally we can walk through the timeline of it,” Howard said. “Before you submitted an email for the resolution, none of the Black board members had been consulted for input or their thoughts before you shared it with the board as a product.”

Scamihorn then pointed to Howard releasing a resolution of his own to the public Tuesday, June 23. Howard’s resolution names Ahmaud Arbery, Rayshard Brooks and other Black people killed recently in racist violence.

Howard said he wrote his resolution to address systemic racism, because he felt Scamihorn’s resolution was insufficient. Howard said no one on the board acknowledged his message after he sent it twice.

Howard then asked Scamihorn if he would be willing to adopt any of Howard’s five statements.

Scamihorn said he would be willing to accept what the majority of the board decides.

Howard read off one of his resolution points about systemic racism to ask Scamihorn how he felt about it.

Scamihorn said the phrase “systemic racism” was a “nonstarter” for him. He said he does not believe systemic racism is an issue in Cobb schools and that to say there is would be to indict the employees and staff of Cobb County schools. He pointed to staff of diverse backgrounds who teach.

Howard asked if Scamihorn would approve any resolution that had the word “systemic” in it, to which Scamihorn said that the school district is doing something right because more people are moving to Cobb and attending their schools.

Scamihorn was also asked if he thinks there has ever been a history of systemic racism in Cobb schools. Scamihorn said he has not seen any evidence in recent history.

Board member David Morgan said the best thing would be for a resolution to pass 7-0.

Morgan said he also did not want to “indict” Cobb faculty on charges of racism. He also questioned Davis on what policies she would like to see changed.

Davis said that there is evidence of systemic racism in Cobb, but that board members are choosing to ignore it. She said most people can understand racism is bad and she could not support a resolution that does not call for active improvement.

Scamihorn said there are issues of discipline but it is not because of race. It is a policy issue. He said all students have discipline issues from time to time. He added that Howard and Davis do not call him to speak on policy issues.

“You are just flat out lying,” Davis said. “We talked so much, especially when I first got on the board … you’re just making stuff up. You talk to me all the time because you’ve wanted a chair vote, and then that was it.”

Scamihorn said Davis was conflating the issues and that no one had spoken to him on the resolution.

Scamihorn continued, saying he did not like being called a liar. At this point, Scamihorn yielded to parliamentarian Clem Doyle, calling Davis’ remarks “outrageous and unprofessional.”

Morgan spoke again, this time proposing Scamihorn and Howard work together with each of their resolutions and come up with a new resolution.

When Howard was able to speak again, he asked that at least two or three of his resolution proposals be added to Scamihorn’s resolution.

Board member and chair Brad Wheeler said he would support adding only one of Howard’s resolutions to Scamihorn’s, to Howard’s visible frustration. Wheeler continually emphasized the need for a unanimous vote and said Scamihorn’s resolution alone was a “good start.”

Morgan again brought up his point of Scamihorn and Howard working together and said it would be powerful representation if the two did so.

Howard and Scamihorn agreed to work on a resolution to present for the next board meeting Thursday, July 16. Scamihorn then made a request to table the resolution to Doyle.

After that, Scamihorn also requested a formal and public apology “for statements that were directed personally at me.”

Doyle said he was not sure he could support Scamihorn’s request for public apology and instead encouraged board members to review different board policies on rules.

Lastly, Scamihorn asked Doyle if Morgan could be an intermediary, if necessary, to his and Howard’s attempt to come up with a resolution. Davis threw her hands up in frustration and Howard asked if Scamihorn really thought it was necessary to appoint an intermediary.

Howard then said he would be happy to have Morgan as an intermediary. He also said he did not want Morgan’s appointment to be mandatory so as not to conflict with all three of their schedules.

A group of KSU professors, students, want answers after RCHSS department chair resigns and says she was ‘set up to fail’