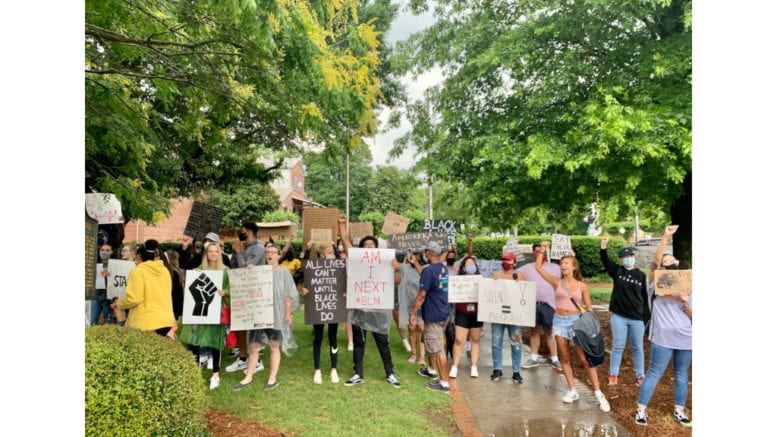 Dozens of protesters gathered in downtown Kennesaw on Friday afternoon to express disfavor with the Wildman’s civil war surplus store.

The nearly 50-year-old store has sparked much controversy over its confederate flags hanging outside along with its many purchasable, Jim-Crow era items that derogatorily depict African-Americans and the Ku Klux Klan mask that is held on display with a noose around its neck.

Two students from Kennesaw State University, Josiah Roebuck and Adam Ashley organized the protest to encourage people to make changes in their communities by voting in local elections.

“The only thing that we can do is vote and put people in power that won’t justify what they are doing at Wildman’s,” said Ashley. “If you don’t like this then you need to go out and do something to get it out of your community. Burning things down just makes everything worse.”

After marching and chanting around the sidewalks downtown, the protesters stood across the street from Wildman’s and played Martin Luther King Jr.’s “I Have a Dream” speech on a speaker followed by a moment of silence to mourn the death of George Floyd, Breonna Taylor, Eric Garner and other African Americans killed by police officers.

Since Floyd, an unarmed African-American man, died in custody of Minneapolis police on May 25, protests have emerged nation-wide against police brutality.

However, protesters across the country continue to speak out against systemic racism and call for better policing.

Kennesaw police chief, Bill Westenberger, spoke with the protestors downtown to address their questions and concerns. He said that he is striving for more transparency within the department and wants officers to have more positive interactions with the community.

“There needs to be more dialogue and more action from our community to work together to make a difference in what’s happening in our world,” said Westenberger. “I am sympathetic with your perspective – I have ears open and I want to hear and listen and I want to do my part from my seat to take action.”

Westenberger says that although he does not personally agree with Wildman’s, the store is not in violation of the law.

One protestor said that he relates the desire to close down the store with Germany’s ban on Nazi symbols other than inside museums.

“It should be the same for America regarding the Confederacy and the confederate flag,” said Igbagbo Mobolaji. “It belongs in a museum as something that we came from and have moved passed. We should learn about it as history and not as memorabilia that can be bought from a store.”

Wildman’s owner, 89-year-old Dent Myers, emerged from inside the store to tell reporters that he believes his wares and displays are solely history and that he doesn’t find them to be racist.

Kennesaw resident and employee at Wildman’s, Margorie Lyon, was angered by the protests.

“They’re hypocrites in my opinion. I just have to bless their hearts,” said Lyon. “That is selfish, stupidity in my opinion. They are publicly embarrassing themselves. This is all for glory and to have their five minutes of fame. If you focus on oppression or negativity that’s all you’re ever gonna see.”

Protests in support of KSU cheerleaders who “take a knee” continue