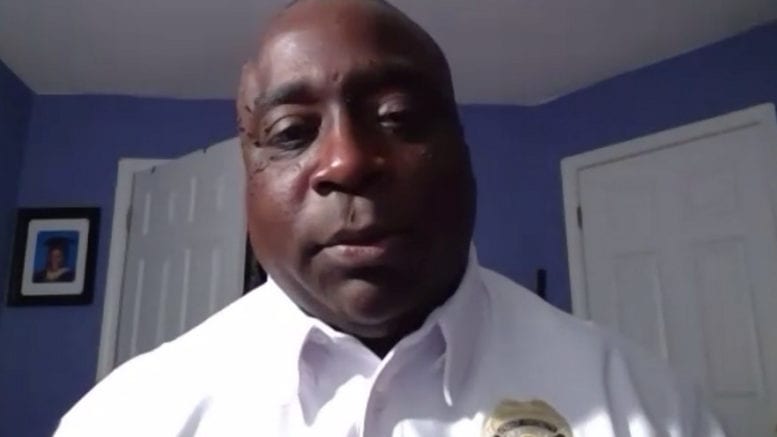 The Mableton Improvement Coalition, Austell Community Taskforce and the Powder Springs Community Taskforce hosted “Racism In Our Community and How We Can Address It,” where local law enforcement, teachers, entrepreneurs, clergy, parents and students of Cobb schools spoke.

The first question was directed toward Cobb Police Department deputy chiefs Stuart VanHoozer and Scott Hamilton about what the realities are of being in law enforcement in today’s climate.

VanHoozer said there is a lot of hostility toward police officers due to the police killings of Black people nationwide.

He said people were rightfully concerned about the recent killings but what has occurred since then has been “extreme animosity toward police.”

“ … some of that extreme animosity,” VanHoozer said. “What it’s actually causing is for an officer to immediately be greeted with ‘no, I’m not going to give you my driver’s license. I don’t have to, I’ve done nothing wrong.’”

VanHoozer said that police officers do sometimes try to deescalate, but he said a conflict arising with a non-compliant person can sometimes create a worse incident.

“Not here locally, but elsewhere,” he said. “The bad incident is then publicized, the animosity is increased and the officers are met with more of that type of animosity in the street.”

Hamilton said he did not condone the destruction of private property but that the riots have forced a lot of conversations to be had that might have otherwise never happened.

He proposed residents join the Cobb Citizens’ Public Safety Academy to better understand how police train and what they do.

Hamilton also said if there is a “bad apple” in the department, to let them know.

Cobb District Attorney Joyette Holmes was a panelist and touched on her open letter to the community from last month.

In the letter, Holmes said action must be taken to combat racism and that her office would be working on policies that promote racial justice.

During the panel, Holmes also said her office has been and continues to do work surrounding implicit bias. She said race and class backgrounds may cause certain unconscious biases among those working in the courts.

Holmes said implicit bias has caused those working within the court system to assume a person does not have familial or community support and as a result, a person may not get recommended for a diversion program.

Instead, the person is charged and sent to jail. Holmes says her office has been changing this.

“We’ve also started facilitating Administration of Justice alternative [sentencing] programs,” she said. “We expand our diversion programs to allow for mentoring, no fee options so that people have the opportunity [to remove a charge off their record].”

Holmes said wealthy people are often able to wipe criminal histories off their records but poor people do not get that opportunity.

The alternative program may give people from wider socioeconomic backgrounds to remove felonies and misdemeanors off their records for free.

She also said her office and Cobb law enforcement started a diversity program where they work with nonprofits to address the issues stemming from internal meetings on implicit bias.

From there, they hope to enact policies that can better ensure racial equity in the court system.

Adriana Helenek, a Mexican-American attorney and mediation specialist, said that the fear Black people sometimes have of police is similarly felt in the Latino community.

Helenek said that with the presence of the 287-G program in Cobb County many Latinos and those with brown skin live in fear of being deported and profiled because of their skin color.

Helenek thanked Cobb’s police department for not being active participants in the program.

Sydney Testman, a high school student within Cobb school district, said she would like to see the social studies program revamped, as it teaches “one-sided” history to students.

Anna Clay, a Pebblebrook High School teacher, said teachers should analyze the disciplinary actions they take against students every day. Analyzing such can help teachers identify bias and also how they can improve their own actions when dealing with students.

Assistant District Attorney Latonia Hines reached out to churches at the end of the panel, saying to reach out to her and Holmes’ office if their church would like to learn more about how the office works and to build a deeper connection between the two church and DA’s office.