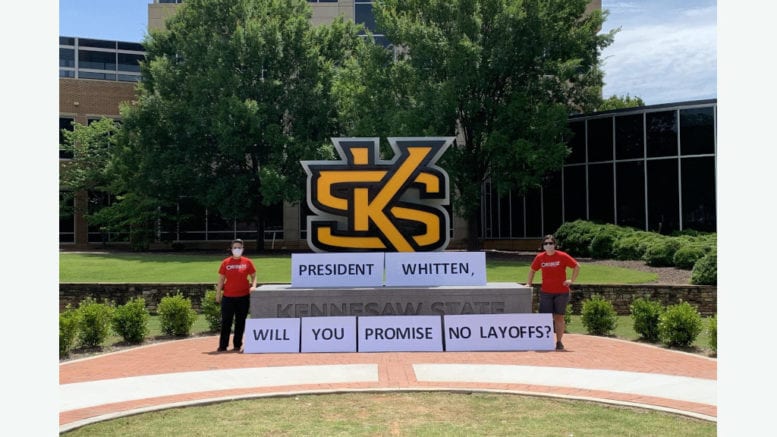 Kennesaw State University’s chapter of the United Campus Workers of Georgia delivered a petition to KSU President Dr. Pamela Whitten’s office Tuesday afternoon calling on her to not fire any workers.

Union members and KSU professors Dr. Heather Pincock and Dr. Sara Giordano delivered a print out of the petition to Whitten’s mailbox near her office inside Kennesaw Hall since Whitten was not there.

Members also laid signs on the KSU sign on the Campus Green, asking Whitten to promise to not lay off campus workers.

Union members had hoped Whitten would be in her office to deliver the petition in-person.

In addition to union members putting the petition in her mailbox, they also emailed it to her.

UCWGA KSU started the petition Tuesday, June 16. It has over 250 signatures from KSU workers and community supporters, asking Whitten for transparency and to not fire any KSU staff in light of smaller budget cuts.

“Included in those cuts were layoffs that would have saved KSU up to $3.1 million dollars,” UCWGA KSU’s petition said. “Luckily, we will need to cut $4.8 million less from KSU’s budget because of the decrease to 11%. This means that without a doubt, none of these proposed layoffs are necessary!”

UCWGA KSU said the union has sent multiple documents to Whitten within the last couple of months asking for transparency from her administration.

On Thursday, May 28, UCWGA KSU sent a memorandum to Whitten in light of the proposed 14 percent budget cut to higher education by Governor Brian Kemp.

Before that memorandum, KSU released a budget plan that revealed furloughs and “operational efficiencies” — layoffs — would occur in University College, one of the largest colleges at KSU. Cuts were also proposed to other areas of the university.

UCWGA KSU demanded furloughs be progressive and no employees be fired. Additionally, they said they were told about these cuts at the last minute and that Whitten has not been transparent about who may be fired.

Since then, Georgia officials revised the 14 percent budget cut to 10 percent. Also, furloughs are no longer occurring.

Pincock said the smaller cut means that Whitten has no reason to layoff any KSU employees.

“So there’s a couple reasons why we think this is a very reasonable request we’re making of the president,” Pincock said. “ … the state legislature’s passed the budget and everything has been finalized and we know the cuts are going to be 10.8 percent. We’ve done the math and the amount that was going to be saved through layoffs is no longer needed because the cuts are lower.”

Pincock also pointed to other University System of Georgia presidents who promised to not fire employees.

Pincock said Dr. Kyle Marrero at Georgia Southern University was one president who promised this. She said UCWGA KSU would like the same commitment from Whitten.

Giordano said that Whitten had not responded to any of the union’s memorandums or emails and that she hopes today’s event changes that.

“ … one of the reasons why we’re out here today is to make sure she really gets it,” Giordano said. “That’s what we asked when we went up to her office was, ‘how do we get this message to her, she hasn’t been responding to us, so we don’t know how to communicate with her.’”

Giordano said the department she works in, University College, has essentially been dissolved since the initial budget cuts were announced and many staff do not know if they will have a job for the rest of 2020.

Staff includes deans, custodians, advisors and more who are not instructors.

“We want Whitten to also commit to not laying off student workers as well,” Giordano said. “That’s another category of workers who often get cut out of these decisions and conversations.”

Pincock also pointed out that despite furloughs not happening, layoffs can still occur.

Union members said the removal of the furloughs is bittersweet, as on one hand, the furloughs are not occurring for the lowest-paid workers, but it also removes the possibility for a progressive furlough.

Giordano said the union has salary data for employees at KSU and that it would be fair for someone making $200,000 per year to take a pay cut to save the job of someone who makes $30,000 per year.

“ [As] I’m going to hand this petition to Whitten it’s hard to not think about that she makes about 10 times the salary I make,” Giordano said. “And 10 times the salary of the people whose jobs have been threatened right now. So it seems unconscionable to us that she wouldn’t personally take a major salary cut that would still leave her in a very high-income bracket — to save a few jobs.”

Pincock said that the union will continue to collect signatures for their petition and that she hopes Whitten will “do the right thing.”