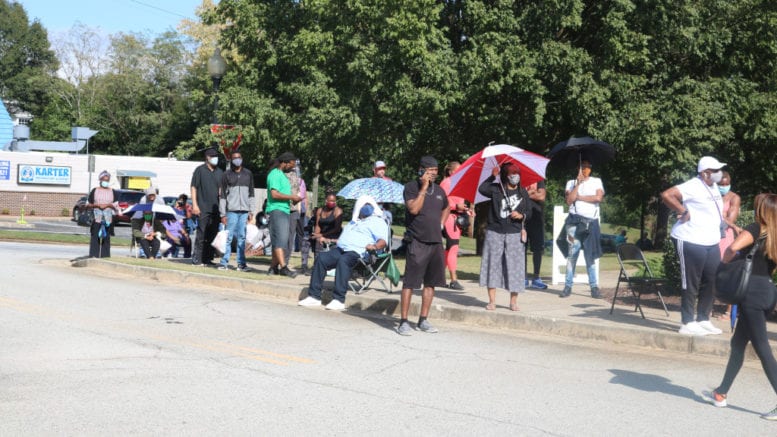 Cobb County has cut the number of advance voting sites in the January 5 runoff, from the eleven sites that were open for advance voting in the November general election, down to five sites. A coalition of voting rights groups has raised objections to the cuts.

The sites for January 5 are:

A coalition of voting rights organizations sent an email to Georgia Secretary of State Brad Raffensperger with the subject line “Urgent Action Needed to Ensure Safe and Accessible Voting in Georgia’s Runoff Elections.”

In response to a question from the Courier at a press briefing to answer questions about the email, Michael Pernick of the NAACP Legal Defense Fund said “I’ll first say we are very concerned about the situation in in Cobb.”

“In South Cobb in particular, we’re seeing four advance voting locations that serve Cobb County’s communities of color that are being consolidated into just one location,” he said. “And that one location is quite remote. It’s all the way at the very, very bottom of the county. And it’s really not accessible and not geographically central to many of Cobb County’s Black and Latinx voters.”

“It’s unclear what criteria was used by the county to determine which locations should be closed, Pernick said. “The locations that are remaining are not are not equitable.”

“It’s also not clear why Cobb is eliminating over half of its early voting locations,” he said. “We’re all appreciative of the hard work of poll workers over the last several months. But other counties aren’t eliminating the majority of their advance voting locations.”

“We’re still hoping that the county will find a way to do the right thing, and make advance voting equitable for all voters in the county. There are hundreds of poll workers who volunteered to serve as poll workers in Cobb,” he said. “Cobb turned them away and said ‘we don’t need them’. So there’s no shortage of individuals available and ready to help on they would just need to be trained and brought on board so Cobb can provide equitable access to advance voting for all voters.”

Janine Eveler, the Director of Cobb County Elections, sent the following email to the Cobb County Courier in response to our request for information about the reason for the closings:

It was not our desire to reduce the number of early voting locations for the Runoff, but unfortunately it became a necessity.

We lost several of our advance voting managers and assistant managers due to the holidays, the work load and the pandemic. In addition, the remaining team members who agreed to work would do so only if the hours were less onerous.

For November, we stretched our staff to the limit to offer eleven locations. Each management team consisting of a manager and two assistant managers worked six days a week from at least 6am to 9pm or later.

Each three-person management team, required by law to be present at each location, was solely responsible for their site for the entire three week period.

For the Runoff, we agreed to increase the number of management staff at our five main voting locations, so that each person could work a less exhausting shift. This has reduced our pool of managers for additional satellite locations.

We are at the end of the election cycle and many are tired or just unwilling to work so hard, especially during this time of year. As we gear up for the next election cycle, hopefully we will not have to battle a pandemic and can train up more people to get us through the entire cycle.

We are planning to have additional check-in stations, staffed with Temps, at each of the five locations, to handle more voters through that process. With a short ballot, the actual voting time should be quick and the check-in process will be the key to moving people through.

I am often asked why we can’t just use election day poll managers to manage the advance voting locations.

Certainly these are people we can recruit from for the next cycle, but they will require more training to run an advance voting location than we can provide at this time.

The processes during AV are very different than on election day and that is why we use regular seasonal employees to run these voting locations. Our seasonal employees regularly work in the State registration systems known as ENet, from which absentee and advance ballots are issued, whereas poll managers have no training or experience using the system.

Also, the voting equipment is used differently in AV, as it must be put in a different state every evening to be used over multiple days. Conversely, the election day managers only know how to close out the equipment at the end of the day and print results tapes. Because of the multi-day usage, the reconciliation forms are also very different as well. In short, it is not a simple transition from managing a poll to managing AV; therefore, it is not a solution we can use for January.

The organizations that signed the letter to Brad Raffensperger

The following organizations signed the letter to Raffensperger:

2020 Elections, From the Editor