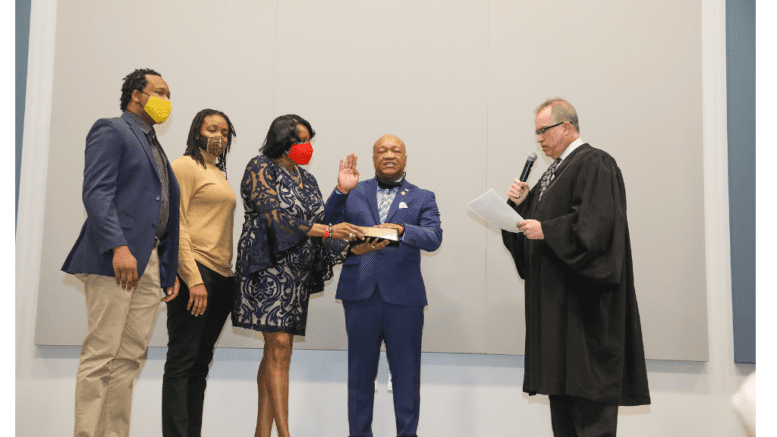 Craig Owens was sworn in as Cobb County sheriff, a historic landmark since Owens became the first Black sheriff in the 189-year history of the county.

The oath of office was administered by Cobb County State Court Chief Judge Carl Bowers, and was accompanied by the swearing-in of long-time deputy Rhonda Anderson as Chief Deputy Sheriff.

Anderson herself was a barrier-breaker, as the first Black woman to serve as a deputy in the Sheriff’s Office when she was hired by the department in 1983.

Owens is a Democrat, and was most recently the commander of the Cobb County Police Department‘s Precinct 2, covering South Cobb.

Do what is just and right. Rescue from the hand of the oppressor the one who has been robbed.

Do no wrong or violence to the foreigner, the fatherless or the widow, and do not shed innocent blood in this place.

The first speaker was Sam Olens, a Republican who has served as chair of the Cobb County Board of Commissioners, Georgia Attorney General, and president of Kennesaw State University.

“About 20 years ago, when I was a Cobb County district commissioner, I first witnessed Major Craig Owens’s desire to improve our community, to establish relationships with neighborhoods, and form bonds with our youth,” Olens said.

“Craig was an early leader of an organization called COPS … Color of Public Safety, an organization created to assist those in our community who needed a helping hand,” he said. “I immediately admired Craig’s passion, his drive, and his commitment.”

“Craig and other officers understood that our children and communities ravaged by violence, sometimes viewed police officers as the enemy,” he said. “Enhanced community policing was needed to secure both the streets and the safety of those children.”

“It’s not only Shaquille O’Neal who can change lives with a pickup basketball game,” Olens said. “Many people can do that, if they so choose.”

“Major Owens recognize that he and his officers could make a difference. programs such as Shop with a Cop, and simply bringing bicycles to children in a neighborhood,” Olens said.

The next speaker was Democratic state Representative Teri Anulewicz, of Georgia House District 42, which covers Smyrna and Marietta.

“It is a community that today is going to have just the most wonderful representation through their Sheriff, through Craig Owens, and through Rhonda Anderson,” said Anulewicz.

“Cobb County is a broad, wonderful, vibrant, dynamic county with broad, wonderful, vibrant and dynamic groups of people and families and businesses who all come together to make this our home,” she said. “And the fact that we’re going to have a sheriff (with) this kind of character that Craig Owens has in law enforcement in Cobb County is something that is going to make our future all that much brighter.”

“The transparency that we can look forward to, the dignity that we can look forward to, the compassion, the empathy, all of these things that make Craig Owens such a phenomenal sheriff,” Anulewicz said. “I’m very excited for what the future holds. I’m so grateful that Rhonda Anderson is going to be by his side. I am so excited for what having Craig Owens as sheriff means for Cobb County.”

“I’m here to show my support for my friend, Craig,” he said. “As I mentioned to him earlier, we were friends first.”

“But I think (what’s) really important is his background, and I think, Rhonda, the same with you.”

“You know, as commissioners, we kind of work with the sheriff, but we’re kind of independent,” Ott said.

“As the chief law enforcement officer of the county, the sheriff has a big role. But the commission has to work with the sheriff. And I think coming from the police department, it’s going to be critically important because Craig has been there,” he said.

“So I wish you the best of luck, both of you in your new positions. And it’s an honor to be here,” said Ott.

After Owens and Anderson were sworn in, incoming BOC Chair Lisa Cupid was called to the lectern.

“What an honor it is to be a part of this day,” Cupid said. “This is a big day for you. But it’s a wonderful day for Cobb County. We are all here because we are so excited for you and want to celebrate you and congratulate you.”

“I want to thank you for having the courage to step up and act in an arena where so many knew something needed to be done,” she said. “But so many felt helpless.”

“I appreciate you, and I admire you for your courage, and your ability to step up and help us move Cobb County forward,” Cupid said.

Roy Barnes, former governor of Georgia, who grew up in Mableton, spoke via teleconference, and said, “I want to congratulate my friend Craig Owens for being Sheriff of Cobb County.”

“What a historic day. Craig has been for years our precinct commander and he’s from Mableton,” Barnes said. “So he not only is the first African-American to serve as sheriff. He’s the first Mabletonian also.”

“I’ve known Craig for years, and I also know what a fine sheriff he’ll make,” said Barnes. “There is no one that has higher integrity, higher standards and higher requirements for his own conduct. This is an historic day and I congratulate you, Craig.”

“I know this is just the beginning of a wonderful tenure as the sheriff of Cobb County,” he said.

Chief Deputy Anderson took the podium, and said, “A little about me. I’m a native of Cobb County, born and raised, born up at Kennestone Hospital.”

“I’m a mother of four, a grandmother of four. I attended Marietta school systems, I graduated from the University of West Georgia,” Anderson said.

“I attend the best church in Cobb County, Turner Chapel AME, under the leadership of Pastor Bright, and I’m glad you’re here to share this day with me, pastor,” she said.

Other speakers included members of the Omega Psi Phi fraternity and the Delta Sigma Theta sorority, and Owens’s wife Sharon.

Sharon Owens said, “I pray that God continues to be your guide, so that the work that needs to be done to make this sheriff’s office, one of, if not the best sheriff’s offices that’s run in the state of Georgia, and even in the world.”

“But just as you did not get there alone, I say to all within the sound of my voice, Craig and Rhonda will need us, the community.”

Craig Owens then took the stage. Owens has been recovering from COVID-19, and told the audience that despite usual etiquette, he would lean on the podium.

After thanking various supporters in the audience, Owens began talking about his background.

“So just a little bit about me,” he said. “Just in case you don’t know my name, my name is Craig Owens. I am your new sheriff.”

“As I was growing up, you don’t come across the river, across river is trouble. And that was the perception I grew up with,” he said. “And I see some fellow people who were in Atlanta when I was growing up: Tony Williams here, he went to Douglas High School.”

He said in taking the position of sheriff, he would be leaving a job in the Cobb County Police Department that he has loved for over 30 years.

Owens listed some of the duties he had performed, and then singled one out in particular.

“I also had a stint … which people thought was punishment, I took it as a bonus, and I was able to work at Cobb Animal Services, which turned out being one of the best jobs I’ve ever had,” Owens said.

“And I can tell you this, if you want people in Cobb County’s attention, mess with the animals,” he said.

“They will shut your email system down and they will overflow the commission meetings so you can’t get in,” he said. “And that’s how passionate the community is about animals here in Cobb County.”

“And it really taught me a lot about dealing with community,” he said.

Owens said he will present a plan for his first 100 days in office.

“We have to restore truth, trust and transparency, which is what we ran our campaign on,” Owens said. “And that’s what we plan on doing once again.”

“We’ve put together a roadmap for success, which I’ll be announcing later in the week, the 100 day plan for my first days in office,” he said.

“I’ve also been able to identify some of our local, civic and community leaders who I’d like to serve on our advisory committee,” said Owens.

“We will begin work to make sure that that the (Adult) Detention Center is as safe as possible during the Covid-19 pandemic, and reviewing all CDC guidelines to ensure that we’re doing everything we can to make sure it is the safest detention center in the state of Georgia.”

“We’ll be reviewing existing contracts to include the contract with ICE that was recently re-signed. And we will make sure we recognize and review every contract to make sure that we’re being good stewards of the county’s monies.”

“We recognize that there are a lot of unknowns, and it will take a few months to get grasp of everything. But we’re gonna get there,” he said.

“With your help and your support, we’re going to get there.”

“To the men of the Cobb County Sheriff’s Office, I look forward to working with each and every one of you. I know we can make Cobb County the national model of what a sheriff’s office should look like.

Watch the video of the ceremony