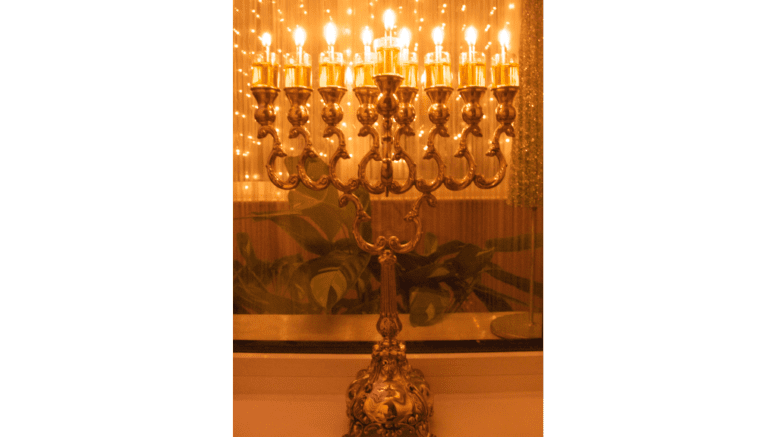 The City of Kennesaw will hold a Hanukkah menorah lighting in downtown Kennesaw on Sunday December 13, 2020.

Kennesaw Mayor Derek Easterling will join with Rabbi Zalman Charytan of the Kennesaw Chabad Jewish Center to light the 9-foot Hanukkah menorah in Downtown Kennesaw on Sunday, the fourth night of the eight-day holiday.

The city will stream the ceremony live at www.facebook.com/CityofKennesaw.

Rabbi Charytan gave the following explanation of Hanukkah for those not familiar with the Jewish holiday:

It recalls the victory of a militarily weak Jewish people who defeated the Syrian-Greeks who had overrun ancient Israel and sought to impose restrictions on the Jewish way of life and prohibit religious freedom.

The Syrian-Greeks also desecrated and defiled the Temple and the oils prepared for the lighting of the menorah, which was part of the daily service.

Upon recapturing the Temple, only one jar of undefiled oil was found, enough to burn only one day, but it lasted miraculously for eight.

In commemoration, Jews celebrate Hanukkah for eight days by lighting an eight-branched candelabrum known as a menorah. The holiday is a symbol and message of the triumph of freedom over oppression, of spirit over matter, of light over darkness.

Marietta Pilgrimage Christmas Home Tour to be self-guided this year

Registration open for Marietta’s “Scarecrows in the Square”