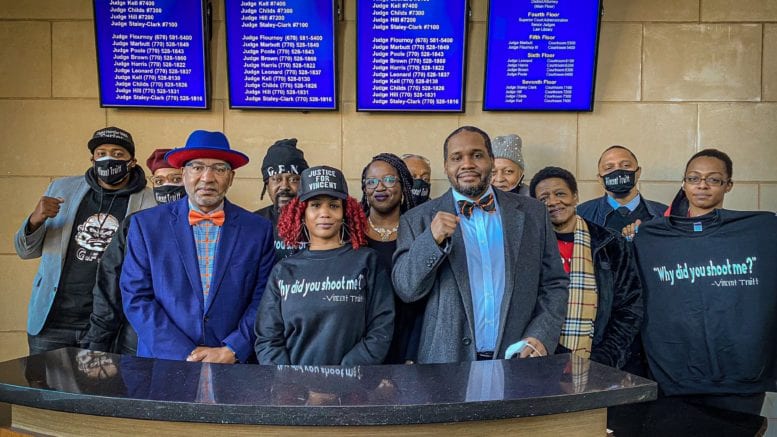 One of the attorneys for the family of Vincent Truitt, a teenager killed by a Cobb County police officer said the family plans to sue the Cobb County government and police department $50 million for the wrongful death of the teen.

The officer allegedly shot Truitt twice in the back as he ran away from the officer near Six Flags on July 13, 2020. Truitt died from gunshot wounds the next day.

Nearly six months after one of their officers killed Truitt, Cobb County police will not name the officer who killed Truitt.

Griggs said in a press conference Friday, Jan. 29, and in a phone call with the Courier the following Monday that he and the family have sent Cobb County government and police an ante litem notice.

An ante litem notice informs a defendant that the victim intends to sue them.

The current ante litem notice allows Cobb to settle the wrongful death claim instead of escalating to a lawsuit.

In this situation, Truitt’s family has let Cobb County know that they intend to sue the county for $50 million for the wrongful death of Truitt.

Cobb County has 30 days to investigate the wrongful death claim.

If the county does not respond within that timeframe, then the Truitt family will actually sue Cobb County for $50 million.

“The purpose of the lawsuit was to hold [Cobb] accountable,” Griggs said. “[And] to also force the release of the officer’s name as well as the body cam, which we believe shows that Cobb County is liable for the unlawful killing of Vincent DeMario Truitt.”

Neither the ante litem notice nor the potential lawsuit would replace charging the officer who killed Truitt with murder, Griggs clarified.

The potential lawsuit is in civil court while charging the officer would be a criminal court case.

“We believe that [the potential lawsuit] will unearth the evidence that is necessary for the public to put pressure on the district attorney’s office to move,” Griggs said.

Griggs said Truitt did nothing that warranted the police officer to use deadly force.

Because of these “misrepresentations,” Cox must resign, Griggs said.

Griggs said he and Truitt’s family want to see transparency and accountability occur in Cobb’s handling of Vincent Truitt’s case.

For months, Truitt’s family, community supporters and Griggs have called for the DA and Cox to release the videotape of a Cobb officer killing Vincent Truitt to the public.

Truitt’s family, Griggs, former DA Joyette Holmes, Cobb PD and the Georgia Bureau of Investigation have all seen the video of the killing, according to Griggs.

Griggs said although Truitt was found with a gun near him, Truitt never pointed nor fired a gun at the police officer who killed him and Holmes and the GBI can back that up.

“At the very best, Vincent got out of the vehicle, turned and took two steps to run away from the officer and was shot in his back,” Griggs said. “Nowhere in that video, can you see Vincent do anything aggressive or offensive to necessitate him being shot in his back twice.”

In addition to Cox resigning and releasing the tape of Truitt’s killing to the public, Cobb PD must fire the officer who killed Truitt and the DA must charge the officer with murder and send the officer to prison, Griggs said.

“If anyone other than a police officer had have done what this officer did in Cobb County, they’d be sitting in the detention center charged with murder, waiting on grand jury indictment,” Griggs said.

Griggs said that although a Democrat is now Cobb DA, he sees no difference in how Broady is handling Truitt’s case versus former Republican DA Holmes.

In conversations held between Broady, Griggs and Truitt’s family, Broady indicated that he would handle the case differently than Holmes, Griggs said.

Broady, the day after he won his election in November, also told Channel 2 Action News that he would release the tape publicly with Truitt’s family’s permission.

“[Broady] now indicates that he wants to send this case to the grand jury, which is exactly what Joyette Holmes was going to do before Flynn Broady became the DA,” Griggs said.

After the grand jury makes a decision, with the consent and approval of Truitt’s family, Broady will maybe then decide to release the tape publicly, Griggs said.

“That’s never been our position,” Griggs said. “Our position is that there also needs to be charges and that the tape needs to be released immediately. So [Broady has] changed his position since being elected. And that’s very disheartening to the family.”

Griggs said Broady has yet to both honor his promises to the Truitt family and to “show the community the transparency that’s necessary to rebuild trust.”

Broady must honor his campaign promises to the public and to the Truitt family, Griggs said.

Griggs also asked Broady during the January meeting what the difference was between him and Holmes?

“People are running on this notion that there’s going to be a ‘new Cobb County’ ‘it’s a new day in Cobb,’” Griggs said.

“This doesn’t feel like a new day. It feels like the same old cover-up,” Griggs said. “The family has waited almost seven months. There has been no movement in seven months, this officer is still on the police force. And there’s been no public accounting for what happened to Vincent DeMario Truitt.”

Despite the change with the tape, Griggs said Broady is planning to present Truitt’s case to a grand jury in February.

“So we’re hopeful that, you know, [Broady] will do what he said,” Griggs said. “And that’s present this case to the grand jury this month. And live up to his word.”

Police brutality and the United Nations

On Saturday, Feb. 6, Griggs said that he and those associated with the Truitt family will be presenting Truitt’s case to the United Nations as an example of the “police brutality epidemic” in the United States.

[An earlier version of this article misidentified Feb. 6 as “Friday.” We regret the error]

Griggs said the UN has hearings throughout February where police killings of Black people are being presented.

The UN sanctioning the US for its constant police violence may be one of the recommendations made at the end of the hearings.

“So we’re not sure where this all is going,” Griggs said. “But we know we’re presenting. And hopefully, the International Court will take up these matters, because it appears that the courts over here are very slow to justice.”

“Justice requires accountability and transparency — something that’s missing both in Georgia and that’s missing currently in Cobb County,” Griggs said.

The Courier reached out to the office of Cobb DA Flynn Broady, and Public Information Officer Kim Isaza issued the following response: “That is an active case, and we do not release evidence in pending cases.”