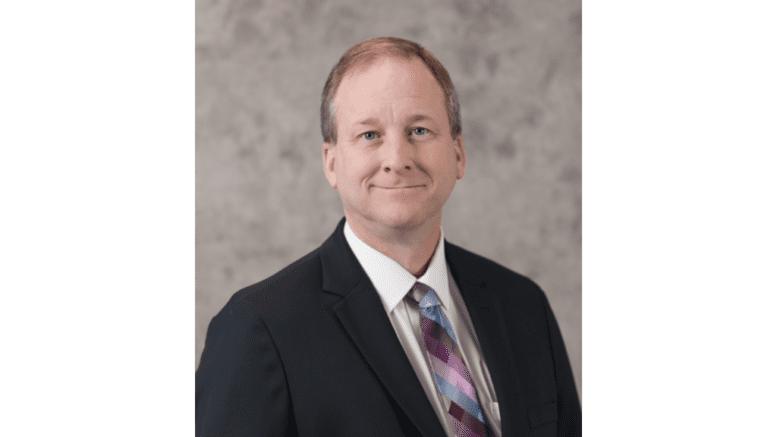 David Blinkhorn (photo courtesy of the City of Kennesaw)

“I am running on the Republican ticket. I have strong conservative family values and that’s how I raised my family,” Blinkhorn told the Courier.

Last month, Reeves announced that he had accepted a position as vice president for Institute Relations at the Georgia Institute of Technology. Gov. Brian Kemp has set the special election for June 15 to fill the seats for districts 34 and also 156, which was vacated by state Rep. Greg Morris (R-Vidalia) after he was named to the state transportation board in March.

Blinkhorn and his wife Karen, a certified public accountant, have lived in Kennesaw for about 20 years, finding a niche in the community through their children’s school activities, scouting and sports. Son Alex is a senior at Kennesaw State University, and their older son Garrett is a graduate of the University of Georgia and works for Amazon Web Services in Atlanta.

For the past four years, Blinkhorn has been the facilities warehouse manager and buyer for Kennesaw State University. His department is in charge of upkeep and maintenance of all buildings on campus and supply acquisition.

In addition, Blinkhorn said he has over 30 years in retail management, working for some of the largest retailers in the country, including Carmax, Target and OfficeMax.

“In those positions as a manager and a leader, I had assignments over logistics and asset protection, inventory control, purchasing, customer service. So I have a wide variety of those experiences that I bring to government,” he said.

In 2017, with his kids now older and more independent, Blinkhorn set his sights on the post 5 City Council position and won.

He listed some of his favorite council accomplishments as the growth of the city and community, the opening of the inclusive park, and the ongoing Depot Park project. He said he’s most proud of “the civility of the City Council…we have differences, but we work through those differences in a civil and respectful manner and we get things done. That’s what I intend to bring to the state House.”

Blinkhorn spoke with the Courier by phone Monday. The conversation has been edited for clarity and length.

What are your thoughts on how the state handled the COVID-19 pandemic? What went well and what could have been handled differently?

Blinkhorn: To be honest, I’m not going to be critical. I think we did a fantastic job. You can, in hindsight, second guess everything, but I will say one of the things we did well, and what is appreciated, is the governor put very little restrictions. We didn’t mandate masks, we didn’t mandate, heavy-handed do this or do that. We saw some states that tried to do that and it wasn’t successful. For the most part, we allowed, and the governor allowed, the communities to do what was right for them…what I especially appreciate is that we’ve been able to get vaccines available…We had PPE and programs coming through the city and the county, and the state was instrumental in making sure those funds got from the federal government down to the cities and the counties.

What are your views on public education?

Blinkhorn: Everybody deserves a great education wherever you are, and I think that COVID pointed out a huge opportunity in our education system just by…going to a digital environment. It worked, but for others it was a challenge. When you take kids out of schools and force them just to do it on a computer, that’s not a successful thing. We know we have to have children in schools and we know we have to support those teachers. I will say we put a tremendous amount of strain on our teachers when we were requiring them to do virtual classes and in-person classes. I’m a strong proponent of our education system and supporting our teachers.

Do you support school vouchers?

Blinkhorn: I will consider all options. I’m not going to come out and say I’m against something right from the start. That’s not my style. I want to hear everyone’s opinion and what’s right for the community. Do I think across the board, blanket, just because you’re unhappy with your school you should get a voucher and go somewhere else? No. Pulling money from our public education system is not always the best thing.

Cobb County has dealt with some environmental problems recently, such as the leaking coal ash pits along the Chattahoochee River and ethylene oxide released by the Sterigenics facility. Where do you stand on environmental issues?

Blinkhorn: Those are all serious concerns for the community…and required intervention and required the government get involved and put some restrictions on it.

What about climate change?

Blinkhorn: When you say climate change, that’s a huge terminology that immediately closes people off. But I will say I’m a proponent of, at minimum, alternative energies. Am I saying we should totally do away with any energy source for the purposes of another? No, but we should be looking into alternative energy.

The Georgia election bill has been under a lot of national scrutiny. What did you think about it?

Blinkhorn: It was a great starting point in that it made the elections, restrictions and the rules clear for everybody across the state. Yes, people are cherry picking lines here and there and making it sound bad, but the bottom line is the voter integrity bill, SB202, actually increases voter security and increases people knowing their vote is protected…nothing has changed. Everyone who was a legal voter last time is still a legal voter now. The fact that we’re arguing about it is kind of baffling to me.

In 2019, Rep. Ed Setzler (R-Acworth) sponsored the abortion bill (HB 481) which was later deemed unconstitutional by the court. Would you support a bill of that nature?

Blinkhorn: Yes. I say that strongly. I take offense to calling it the abortion bill because it’s the heartbeat bill. And what people don’t understand about it is they really need to read the bill. There’s two things that they don’t understand. One, in Roe v. Wade, the Supreme Court has a clause in there that left open that the individual states had the right to make bills relative to abortion and what that would look like in their state. Everybody just assumed Roe v. Wade made it legal forever and there’s nothing else to be done about it.

The Heartbeat Bill, what it does is not so much that it stops abortions, it actually gives rights to the birth mother and the unborn child. Nobody talks about that, that once there’s a heartbeat, you can actually claim the unborn child on your taxes, your unborn child has the potential to sign up for social services. There’s a lot more in that bill…when people find themselves in these situation where abortion seems to be the only choice, well this bill gave them choices. And unfortunately, with all the negativity around it, they’re not hearing that there are other options besides abortion.

Where do you stand on the Second Amendment?

Blinkhorn: It’s clear cut. We have a Second Amendment. You have the right to own a gun. That’s a very simple thing. Now I will tell you that no one has put forward any legislation to curb gun violence that makes any sense. I would stand here and support something if in fact it curbed violent gun behavior, but no one has come up with that.

Georgia’s medical cannabis law is still very limited and proponents are frustrated at how slowly the process is moving with regard to the cultivation bill that was passed in 2019. Do you support measures to give patients access?

Blinkhorn: I’m going to be honest. I need to be more educated on the topic. I do recognize that there is a need for families to make use of medical marijuana…I’m just not educated enough to say it’s something that we should cultivate in Georgia or whether we should import it. But I am very much open to any healthcare type of situation that helps make people’s lives better.

Long waitlists for disability waivers are a major issue for the disability community. During budget cuts last year it took a great deal of lobbying for any new slots to be opened.

Blinkhorn: I am for being fiscally responsible in government, but sometimes it does require you pay money in in certain categories. And this is definitely a category that there’s a need. I’d look at options on whether it’s a state thing or how we can get federal funding or how we move the money around. Sometimes cutting stuff isn’t the answer…when the community makes me aware of a situation, I’m going to go to those people and we’re going to come up with a solution.

What is your response to the BLM movement and calls for police reform?

Blinkhorn: We do have probably some of the best public safety in the world. That being said, there are challenges and there are opportunities. I think that is another one of those situations where we’re not holding police accountable in some respects, and then in other areas where we’re being unfair. I know that seems to be talking both sides, but we definitely have to get together on this topic.

What issues have we not discussed that are important to you?

The biggest challenge is what’s referred to as “the last mile.” We have park and rides, which is a good option for people, but how do they get from their house to the park and ride? We’re still missing that last little segment. Atlanta had the scooter issues before COVID, that was kind of the last little segment that was able to move people going two and three blocks, not needing a car to get to a larger public transportation. Everybody’s focused on ‘we need a train system or mass transit’ on the top end, but ultimately we’ve got to make it where people are shortening their commute closest to home.

We are changing the way the community is in that we are putting the multi-use family projects together where you have retail, and you have housing, and you have grocery stores in communities so people can move to these communities and not have to drive so much.

Qualification for the election begins Wednesday. In accordance with state law, Blinkhorn’s seat on the Kennesaw City Council will be vacated. Mayor Derek Easterling and the City Council will select someone to finish out the term, which runs until 2021 [Editor’s note: an earlier version of this article stated the term was over in 2022. We regret the error].