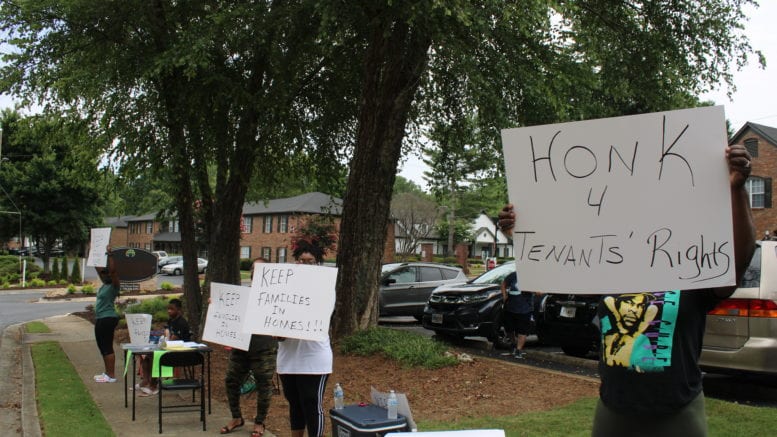 Residents at the Legacy at West Cobb apartments in Marietta rallied this past Friday after the apartment complex told them that they must vacate their homes.

The complex informed residents in Buildings E and J on June 23 and July 13, respectively, that they must leave their apartments because the buildings must be renovated.

During the renovation, utilities will be shut down. The apartments will then be re-rented to other residents.

The complex initially told residents of Building J they had 30 days to leave but the complex extended the time to 45 days after members of the Cobb County Southern Christian Leadership Conference negotiated with management.

Despite the extension, residents say that is not enough.

Quantina Scott lives in Building E and was told to leave her apartment.

Scott organized Friday’s protest to draw attention to what property management is doing as well as help others like her find the resources to be able to move and find somewhere else to live.

“Many families don’t have money to move at this time,” Scott said. “We’re trying to advocate for families so they can stay in their homes.”

The majority of residents living at these apartments are working-class and are deemed essential workers since the pandemic began.

Additionally, many of them use Section 8 vouchers to afford housing.

Scott pointed to high prices of rent, many housing areas not accepting Section 8 vouchers and Georgia ending federal unemployment benefits as factors contributing to residents at the complex being unable to afford rent elsewhere.

“People just don’t have money,” Scott said. “There’s no money available for people trying to get back on their feet.”

Nichole White, who has lived in Building J for nearly five years, said that when she came home from work she noticed a letter that told her she had 30 days to move.

White hoped that the apartment would move her and her family elsewhere, but she said the apartment just gave them a list of places they could move to.

“I have a young daughter, my grandson and his mom stays with me,” White said. “We don’t have anywhere to go. If we get put out or we can’t find anything, we’re homeless.”

Jasmine Horace said that the time the apartment has given her and her family to move is not enough. She said she lives paycheck to paycheck and does not have the money to simply leave.

She said the front office should assist residents more and that they have barely communicated with her since telling her to leave.

Horace said leaving her home is only half of the issue, as she and her family have made community where she lives.

“I just enrolled my son into school,” Horace said. “He knows some of these kids out here. Now, if I have to relocate to another city, I have to start all over again.”

Scott said that at least 27 people have been told to leave. This number does not include tenants’ families and others who live with them.

Catherine Trammel said that because of her good standing with regard to rent, if she were to move out then try to move back in the apartments would lease to her.

Still, she said she needs more time than the apartment gave her as housing is so expensive and therefore difficult to find.

Trammel said the apartment complex still wants her to pay July rent even though they told her to vacate her home.

Throughout her four years living at the Legacy apartments, Trammel says there have been numerous issues with them.

She said she and her family moved from one building to another one because she had a hole in her ceiling along with mold. Even in the current building she’s in, she says that the balcony looks like it is going to collapse.

Shantearia Gordon just moved into her building in May and is already preparing to leave.

Gordon said she spent thousands of dollars moving to Marietta from her home state of Florida and even enrolled her child in free daycare conveniently located across the street.

Gordon also said there were issues with her apartment.

One day, she found a possum in her apartment, she said. Another time, her stove did not work and she resorted to using a lighter to operate the stove.

If worse comes to worst, Gordon said she will move back to Florida.

Gordon moved to Georgia with hopes of attending college, which she emphasized meant everything to her.

“I had to quit school because when I got an eviction I started crying and getting emotional,” Gordon said. “It’s extremely depressing. So I had to stop my schooling and my bachelor’s degree that I paid good money for.”

Like the other residents, Gordon would like to see apartment owners provide those who have to leave with somewhere to go.

“What are we supposed to do next?” Gordon said. “[The owners are] breaking the lease. What do you guys owe me because if I break the lease, I owe y’all something.”

Keane said that management is working with residents to find new housing and put them in contact with organizations that will help them.

“We have extensive contacts with Cobb County’s Star-C Program, MUST Ministries, Sweetwater Mission, and other programs,” Keane said. “We are committed to meeting with each of the 27 families effected [sic] and getting them resituated.”

When asked what resources Aspen has provided residents with, Keane pointed to the extra 15 days the company has given them to move out.

He also said that if necessary, management will provide an added two-week discount off of rent to help those who must leave.

Keane said that local organizations have assured the company that they will help residents.

Residents were also dismayed Friday at the complex closing down the leasing office during regular business hours when the rally began.

In response to this, Keane said “The Leasing Office was closed during the time of the Rally in order to let the residents have the opportunity to explain their views without being affected by regular office activities. The office is back to normal working hours now and we are busy scheduling one on one appointments with all of the affected families.”

Advocates for affordable housing said that issues of homelessness and unaffordable rent are a less-talked-about issue in Cobb County that needs to be brought to the forefront.

Tanya Brinkley said that the organization she is part of estimates that there are currently 125 homeless people in Cobb.

As part of the HASTE section of the nonprofit, Brinkley works with homeless people and those on the brink of being homeless to find solutions to their individual situations.

Brinkley says that in her line of work, she has found little to no Section 8 housing in Cobb.

Brinkley also criticized deputies from the Cobb County Sheriff Department’s common practice of drawing their guns while they are preparing to evict someone.

“Do we really need to do that? I’m going to go with no, there’s got to be another way,” Brinkley said. “I was former military police in the Army, and I’m pro-police, but there are a lot of things that do need to be reformed. I do think we have the right sheriff in place to do that, but I need to see that sheriff do something.”

Quinn Mulholland is a volunteer with the Housing Justice League, an Atlanta-based nonprofit that advocates for tenants’ rights and affordable housing.

Mulholland helps operate an HJL hotline that anyone living in the metro Atlanta area can call to learn about organizing their fellow tenants.

Mulholland said he talks to residents in the metro area and that Cobb has a lot of the same issues with regard to housing that Fulton and DeKalb Counties have.

“I’ll get a lot of calls from tenants out here in Cobb who are facing [housing issues],” Mulholland said. “It’s really the same across the metro area. It’s landlords trying to illegally evict tenants or landlords that don’t want to do even basic maintenance and aren’t keeping their tenants’ homes up to a liveable condition…that’s as true out here in Cobb as it is anywhere else in the metro area. I think increasingly so.”

18 Comments on "Marietta residents rally to stay in their homes"