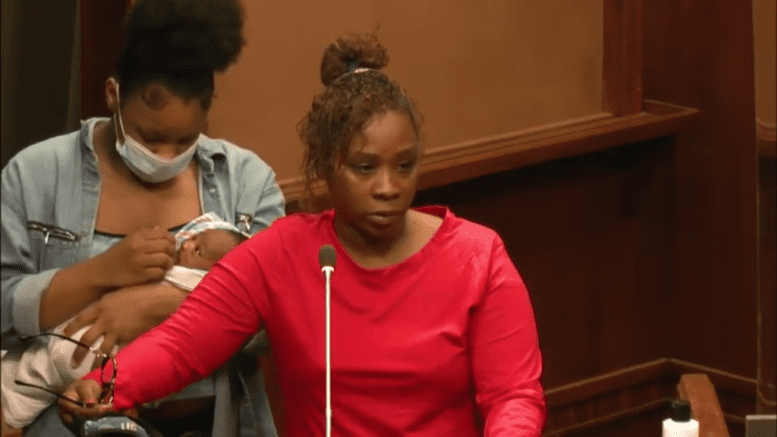 Cobb residents spoke during the public comments section of last Tuesday’s Board of Commissioners meeting to express concern over affordable housing and evictions.

Back in February of this year, Cobb’s BOC approved the creation of the Emergency Rental Assistance Program. The ERA Program’s intention was to help Cobb residents pay rent and other necessary utilities.

In addition to this, the Centers for Disease Control and Prevention issued a temporary eviction ban that a federal judge struck down earlier this month.

The moratorium remains in place until next month while President Joe Biden’s administration attempts to appeal the judge’s decision to end the ban.

Despite the ERA Program and CDC eviction moratorium, some Cobb residents say that they have trouble affording rent.

Some residents also say they are subjected to dehumanizing and possibly illegal evictions.

Natasha Martin and her family were evicted from their Vinings home Thursday, May 6.

Martin said she was caring for her daughter and newborn grandchild when her son called her to inform her that sheriff’s deputies are at their house with guns drawn, telling them all to get out their house.

Martin said she was terrified for her teenage son, who is Black.

Martin also said that deputies approached her husband, telling him to get off the couch he was sitting on.

Martin said her husband has had five strokes, cannot walk and is completely dependent on others to care for him.

Because of the stress he was under, Martin’s husband ended up in the hospital with another stroke, she said. Martin and her family stayed in a hotel after being kicked out.

The front office of where Martin was living was supposed to help out with attaining certain resources if evicted, Martin said, but did not do that.

“I also sent them an email stating what is the full [amount] that’s due, I’m going to try to work on getting that down,” Martin said. “They said they didn’t want it. I explained to them I have a [disabled] husband. They just wanted me out. And that’s fine. What’s not fine is pulling out a gun on my husband who can’t walk.”

Martin thanked the founder and president of We Thrive in Riverside Renters Association, Monica DeLancy, for coming to her family’s aid when it was needed.

We Thrive in Riverside advocates for the rights of renters in the Riverside area of Cobb County.

To close, Martin asked the board about families who face evictions and do not know whom to call when they need help.

She asked the board to take action to assist families who are being evicted.

“I don’t like to cry in public … Nor do I like to disclose my own life … But I know I have to open my mouth because there are other people that are going through what I’m going through. So I’m asking for help for people like me,” Martin said.

The Courier reached out to the Cobb County Sheriff’s Office for comment on the drawn weapons Martin described.

Saba Long, the Sheriff’s Office spokesperson said that officers drawing their guns during evictions is a common practice by deputies to ensure their safety.

“The deputies knocked on the door, announced themselves, and that they were there for an eviction action,” Long said. “After they determined the dwelling was clear they placed their weapons back in the holster. This is standard procedure. Camera footage showed that at no time were the deputies discourteous to the occupants of the residence and in fact assisted them in retrieving personal items.”

Courtney Omega, a friend of Martin and former city council member of Coconut Grove, Miami, Florida, said she now lives in Georgia but was previously evicted while living in Florida.

Omega said evictions are shameful and embarrassing and demanded the board draft “aggressive” legislation to ensure they do not occur.

When DeLancy addressed the BOC, she asked that they implement live resource guides to help with those who are evicted at all times of the day.

DeLancy said that when she was helping Martin and her family with finding a place to go after being evicted, county resources like the board and MUST Ministries did not initially reach back to them, as it was after hours.

Because of the time of day, it was also hard to find UHaul trucks to move Martin and her family’s belongings.

DeLancy said that luckily, her organization was able to assist Martin with food and a hotel to stay in for the night.

It was not until the next morning that Cobb housing officials reached back out to DeLancy and Martin.

“There should be a working number provided so that person can get some type of housing for that evening,” DeLancy said. “You can talk with the churches and say okay, we know that evictions for multi-housing takes place on Thursday. So you rotate … on call churches available on that day.”

Cynthia Johnson said that housing is an equal rights issue and asked the board to implement policies that prevent discriminatory practices in housing.

In particular, Johnson said she would like to see Cobb developers accept housing vouchers.

Housing vouchers, according to the United States Department of Housing Urban Development, “is the federal government’s major program for assisting very low-income families, the elderly, and the disabled to afford decent, safe, and sanitary housing in the private market.”

Johnson said she was illegally evicted back in January.

While waiting for her court date, Johnson has been looking for housing but said it is difficult because complexes will not accept vouchers.

Her denials come in spite of the fact that she has a great credit score, no previous evictions, no lease violations, no bankruptcies or anything else they may disqualify her from housing.

Because housing vouchers expire after an amount of time, Johnson said she had less than four days to find housing before her voucher expires.

Not doing so would be discriminating against people based on their income, some city council members said.

Johnson said Cobb must go in the route that Atlanta has and that the board must work to ensure that developers accept vouchers and create affordable housing.

‘Southern hospitality’ doesn’t always apply to Black people, as revealed in the killing of Ahmaud Arbery