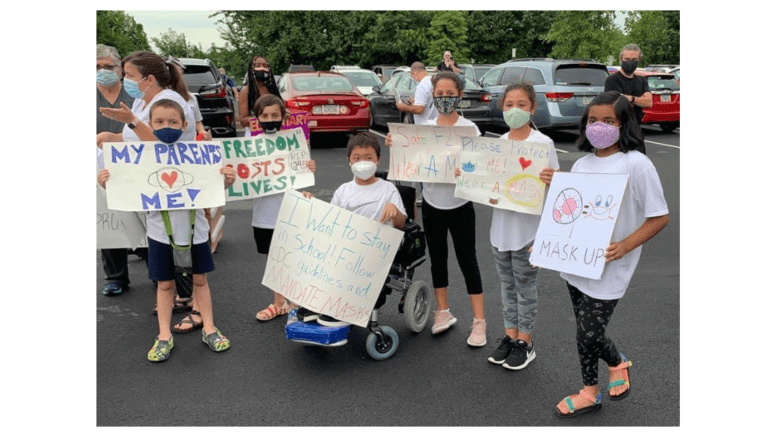 After a tense afternoon work session Thursday, the Cobb County Board of Education reconvened for the voting session as the parking lot teemed with people on both sides of the mask and safety issue.

Ultimately, Superintendent Chris Ragsdale announced he would not be reinstating the mask mandate. The district is modifying the quarantine policy for close contacts so that now those notified must stay home for three days. The virtual option, for which the signup closed last spring, will also reopen via a lottery that is targeted to occur in October with a January start date.

The changes didn’t sit well with many who hoped for more. The quarantine policy still isn’t in line with the guidelines issued by the Cobb & Douglas Public Health Department. Instead the district is using an administrative order, issued by Georgia Public Health Commissioner Dr. Kathleen Toomey, to divert from those recommendations, citing the importance of in person learning.

Some parents said they were hopeful Ragsdale would change his mind about masks after Marietta City Schools Superintendent Grant Rivera announced a return to a mask mandate Thursday afternoon. Since positive cases are surging now, the promise of a lottery to go virtual in four months was little solace.

Friday’s update shows that cumulative COVID-19 cases have doubled in the past week, from 822 to 1,764. The breakdown by school is available here.

Ron Werner, a bus driver for CCSD, died Aug. 10 from COVID-19. Ragsdale offered condolences to the family in his remarks.

Ragsdale did say there would be an online parent survey to explore the possibility of onsite COVID testing.

Agenda items up for discussion included the demolition contract for the former East Cobb Middle School, a presentation from the South Cobb Redevelopment Authority, discussion of student outcomes, and reapportionment of voting districts. COVID-19 safety protocols were not on the agenda due to lack of support from the board. Board member Tre Hutchins’ attempt to add it as an emergency item was shot down by Chairman Randy Scamihorn at the afternoon work session leading to an emotional disagreement detailed here.

This was the second time in as many weeks that people gathered with signs and bullhorns outside Cobb School’s central district office, though the juxtaposition with the school board meeting drew a larger crowd than last week’s event. Last week, anti-mask protesters were outnumbered, but more were in attendance this week. The Cobb County Republican Party was one organization that actively recruited attendees on Facebook posting “We were outnumbered so next gathering we need all patriots on call to show up.”

Shelly Norris, a parent and anesthesiologist, organized the side in favor of safety protocols.

“As a front line healthcare provider, I have witnessed first hand and am continuing to witness the devastation caused by the COVID virus and know the science. As a parent, my heart breaks for these children who rely on us as their care providers and ‘responsible’ decision makers,” she said.

Dr. Katie Gartin is a pediatric urgent care physician. She commended the district’s efforts last year, but said this year is a different story.

In a Facebook post, she wrote, “But all it took was 9 days of this school year in a mask-free, quarantine-free, stick-our-heads-in-the-sand-and-pretend-like-covid-isn’t-real environment for us to all come down with COVID. NINE DAYS!! Why is CCSD not taking the same measures that worked so well to keep our kids safe and in the classroom last year?!?”

The public comment portion of the meeting was, like the afternoon work session, dominated by COVID-19. But with a larger crowd in attendance, there were more audience disruptions. The limited slots are first come, first serve, via online sign up that opens up half an hour before the meeting. The majority of speaking spots were taken by those in favor of restoring the mask mandate and social distancing protocols from last year, though the audience contained members of the opposition.

Ania Sierdzinska, told the board she pulled her daughter out of school last year because she struggled academically and could not attend school with a mask. She read from a letter by psychologist Dr. Ashley Loyd which stated “previous mask mandates have reinforced the notion that the world is not safe.”

At one point, Scamihorn had to quiet the audience, saying “both sides need to be heard.”

Once the room quieted down, Tim Philbin told the board, “The CCSD has many STEM schools. We have six magnet schools. And in these programs, we ask students to follow the science, conduct research, collect data, analyze that data and either prove or disprove a hypothesis. If one of these students used a post from social media without even verifying the source or collecting supporting data to state their claim, they’d get an incomplete. So why aren’t we holding ourselves to the same standard?”f