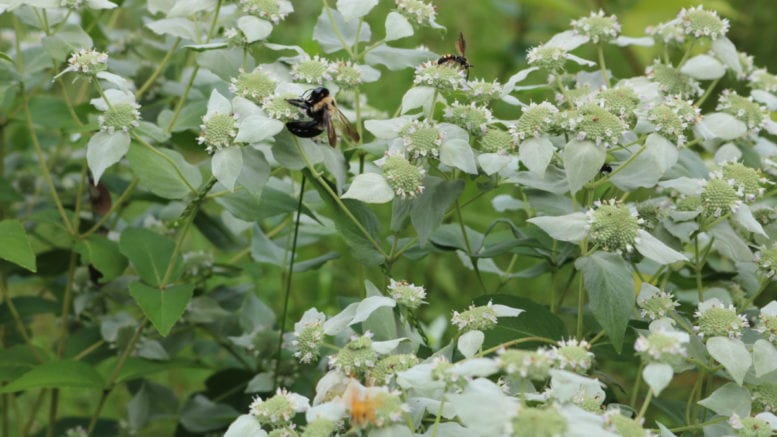 There is a metropolis of bees in my front yard in Mableton.

It includes all sorts of bees and wasps. Some are familiar to me, like the honey bees and bumble bees. Some are exotic-looking, with bright yellows and reds interspersed with black rings.

When it’s warm and sunny, the bees bring the cliche “busy as a bee” to life, swarming all over the flowers that attracted them.

To be honest I still don’t know very much about bees, even after years of going outside in mid-morning during the warmer months to watch them. I often remind myself that I need to hit the internet, learn how to recognize the common species, and teach myself about their life-cycle and habits.

What I do know about them is they love a native North American plant called mountain mint.

There are several common varieties of mountain mint, and I have no idea which one is in my yard.

Mountain mint is definitely in the mint family. You crush a leave and the smell is exactly like the non-native culinary herb often used in teas.

But it doesn’t look much like those low-growing imports from Europe and the Middle East. It stands probably eighteen inches high on stiff stems, and has pointy leaves.

I have a patch of mountain mint that covers a circular area about eight feet in diameter. There are two beauty berry plants in the center of the patch, but they are overwhelmed by the dense forest of mountain mint.

I got the mountain mint by accident.

In September of 2015 I went to one of the native plant garden work days at Heritage Park (you can read about that particular work day by following this link).

One of the regulars from the Georgia Native Plant Society brought a pot containing two small beauty berry bushes and a few tiny mountain mints beneath them to offer to anyone who wanted them.

I took them mostly because of the beauty berry bushes, which true to their name have beautiful berries in the fall.

The mint was an afterthought, but I arranged them in the ground the same way they were in the pot.

Within a year the mint was so tall that the beauty berry plants were struggling to compete for sunlight.

Then came the bees

At that point the bees start showing up in amazing numbers. All kinds of bees. Large bumble bees and tiny bees I didn’t recognize. They were attracted to the shiny clusters of silvery flowers.

I expected butterflies to show up too, and while they did arrive, they didn’t seem nearly as interested in mountain mint as the bees did.

Some of them were so colorful I found myself asking “why have I never noticed one of those bright-colored bees before?”

Since the plants matured, during the warm weather while the flowers on the mint are blooming, I’ve gone out at least once her day and watched the bees. While I’ve never studied them in a text-book kind of way, I’ve noticed a few things about them.

First, most of the bees like direct sunlight. Honey bees seem more tolerant of overcast than the other varieties of bee, but even they come in smaller numbers when there’s no direct sun.

Another thing I noticed is there are a lot of varieties of bumble bee. In the past I’d always thought they were all one species. But it became obvious to me there are small ones and large ones, some no bigger than a honey bee, and they have a number of different color-schemes and shapes. I did a web search and found that there are more than 250 species of bumble bees in the genus Bombus.

One other thing that was nice was seeing a lot of honey bees again. There was a well-publicized collapse in the honey bee population. There are a number of reasons for this decline, included disrupted feeding patterns brought on by climate change, the use of pesticides, and habitat destruction. But the honey bees visit the mountain mint regularly.

Farewell to the bees for this year

About this time every year the flowers on the mountain mint begin to play out, and the bees disappear. Enough of them are still showing up to make my morning visits to the mint worthwhile, but I already see a substantial decrease in numbers.

So within a few weeks the mountain mint will begin dying back, and the bees will stop coming.

But next year the cycle will begin again.

From the Editor, Native Plants

Everything you ever wanted to know about kudzu