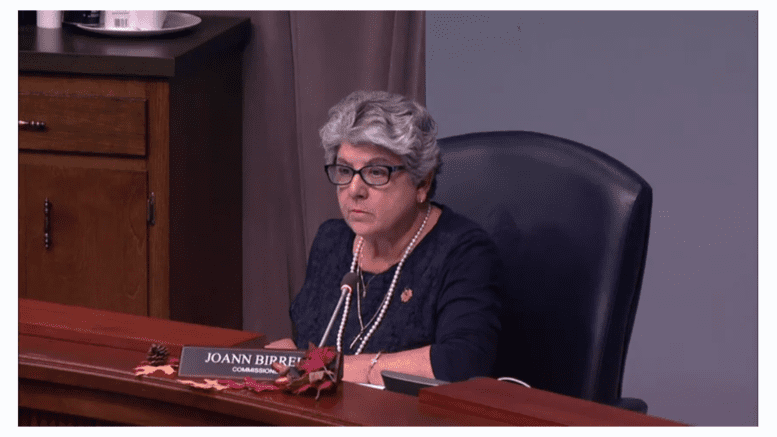 The Cobb County Board of Commissioners approved a rezoning request that will allow a multifamily apartment complex with 350 units on the site of the Regal Cinema in Town Center Mall.

The request, zoning case Z-70-2021, was for a property located on the north side of Town Center Drive, north of the intersection of Mall 5 Road, on the west side of I-575 at 2795 Town Center Drive.

The Cobb County Planning Commission recommended approval during their meeting earlier this month.

The applicant for the rezoning, PG Investco, was represented at the BOC zoning meeting by land use and zoning attorney Kevin Moore.

The request is for RRC zoning.

The zoning documents for the case describes RRC as follows:

The RRC district is established to provide locations for intense retail commercial, office or mixed
uses which exceed 500,000 net square feet and which are designed and oriented to serve a
regional market making up a community. Projects developed within the RRC district should be
done so as compact unified centers. Ideally, projects developed within the RRC district should
occupy an area adjacent to or having good access to interstate highways, which is delineated
within a regional activity center as defined and shown on the Cobb County Comprehensive
Plan: A Policy Guide, adopted November 27, 1990.

In addition to the rezoning, the applicant requested variances, including a reduction of the required parking spaces under RRC, and the reduction of setbacks on the northern and southern ends of the property.

Moore, the applicant’s attorney, said that the redevelopment would be done by Presidium.

As in the earlier Planning Commission meeting, Moore compared the density of the development his client proposed with existing properties of higher density surrounding Town Center Mall.

He also repeated the requests for variances that would reduce setbacks and reduce required parking.

She read from the following letter from the BFCA to the Cobb County Board of Commissioners:

Re: Z-70 (2021), Application by PG Investco, LLC to rezone 17.89 acres located on the north side of Town Center Drive, north of the intersection of Mall 5 Road, on the west side of I-575 from GC to RRC for an “Apartment Community.”

Dear Board of Commissioners,

The Bells Ferry Civic Association is submitting this letter in opposition to Z-70 as it is currently submitted.  This request is to rezone the site to the RRC zoning district to develop an apartment community. We have many concerns regarding this development, including density, setback variance requests, stormwater issues and school capacity.

To begin with, this is a very intensive development and the zoning proposal is not in conformity with the future land use map of Cobb County. The RAC designation is not supportive of a residential usage only, as code requires it to have a retail component as well. A strictly residential development needs to be zoned RM-16 with a density of 16 units per acre instead of the requested 26 units per acre. The Town Center Area is already inundated with apartment complexes that have done little to rejuvenate the mall which is in foreclosure. According to apartments.com there are over 300 available apartments in the Town Center Area, and that is not including several apartment complexes currently being built/or to be built (Z-68-2020 and Z-53-2021). The TCCID recently mentioned that the area is in the process of becoming more industrialized. The desirability of these apartments will dwindle if the mall becomes a distribution warehouse center.

Furthermore, the property is adjacent to the Noonday Creek Area and consists of flood plain (100-year Floodplain Flood Zone) and wetlands. Therefore, variances should not be allowed to reduce the required setbacks and infringe further into the protected areas. Instead, the setbacks should be increased. In the original site plan the back setback was listed at 10 ft. In the current site plan the two buildings at the back of the development have been moved closer to the property line and yet the back setback is now 50 ft. How can that be?  On the west side of the property, there is a variance request to reduce the minor setback from fifty to five feet. With only a 5-foot setback, construction equipment will not be able to work on that side of the building without intruding on the adjacent property or flood plain area. Five feet is just not feasible.  In addition, we question the impervious surface amount of 6o percent. This percentage is only attainable by calculating in the 50 ft State Undisturbed Stream Buffer, the 50 ft Cobb County Undisturbed Stream Buffer and the 75 ft Cobb County Impervious Stream Buffer. None of this area is allowed to be built on so it should not be allowed to be included in the pervious surface calculation.  We also question why sewer capacity was only determined to be 0-5 years at the Noonday Wastewater Treatment plant and not “over 10 years.” When one walks the Noonday trail there are times that the smell of sewage permeates the air. Have the sewer issues been corrected along Noonday Creek which is already deemed highly polluted – receiving a rating of 4 out 5 for pollutants with 5 being the worse.

Stormwater run-off is another concern. Over the years, there has been a substantial increase of impervious development along Noonday Creek and adding yet another massive concrete development will further increase the odds of major flooding downstream into residential areas. It was revealed at the PC meeting that the County took possession of the retention pond located immediately off-site. The TCCID Alliance had wanted to convert this pond and unique ecosystem into a recreational park area since it connects to the Noonday Trail. It had the potential to become another “Chattahoochee Nature Center” which would draw thousands of people yearly to help rejuvenate this declining area which now consists mainly of apartments, car dealerships and Off-Campus Student Housing.  Instead, the needs of developers have been deemed more important than revitalizing the area for Cobb County residents.

Other issues include the need for sound mitigation measures since the complex will be situated next to a major interstate and exceeds the Federal Noise Abatement Criteria (NAC) of 71 decibels. Another proposed Class-A apartment complex (Z-53) located just a mile away, included in their stipulations that proposed mitigation measures would ensure that the complex achieve a Sound Transmission Class (STC) rating of 34. We request that the same stipulations apply to this development.

Lastly, we have concerns about the impact that this development will have on Bells Ferry Elementary School which is once again over capacity after having added additional outdoor modular classroom buildings just a few years ago. The other proposed rezoning apartment complex request (Z-53) is also assigned to Bells Ferry Elementary.

In summary, we are opposed to this multifamily residential community, as submitted, due to the intensity, variance setback requests, stormwater concerns and the over-capacity status of school enrollment.

Thank you for your time,

The property is in District 3, so Commissioner JoAnn Birrell led the discussion among the commissioners.

She called on Carl Carver from Stormwater management and asked if the decision about whether to do underground detention or a pond would be made during plan review.

He said yes, the applicant would be required to provide details of runoff reduction, and that some of that had already been addressed with the reduction in impervious surfaces.

She asked Tim Davidson, who does site plan review for the Cobb Water System, to address the issue of sewage capacity. He said that his department could check on the odor issue mentioned by the BFCA and that the water and sewage capacity for the project should be adequate.

Birrell called on Amy Diaz, a project manager and engineer with the Cobb DOT, and asked if the distances of the access points into the property would meet fire department requirements, and Diaz said yes. Diaz said the Cobb DOT approved of the plan as revised with changes to move one of the access points, and create left-turn-only access into the complex at one of the entrances.

Birrell made a motion to approve the rezoning to RCC on the conditions that the maximum number of units is 350, the maximum impervious surface is not more than 60 percent, along with a list of other stipulations and final approval requirements.