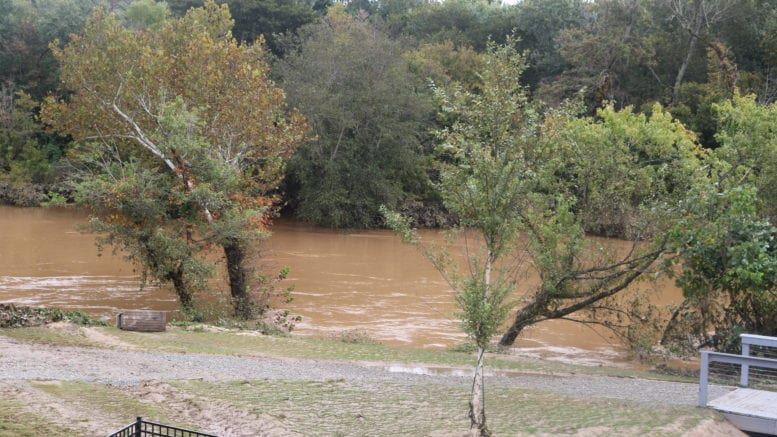 According to the report from the National Weather Service, Cobb County is under a flood watch until Friday afternoon.

Here is the text issued by the NWS:

Overnight Thursday through Friday early morning Showers before 7 pm, then showers and possibly a thunderstorm between 7 pm and 1 am, then showers after 1 am. Low around 46. South wind 10 to 15 mph becoming west after midnight. Winds could gust as high as 25 mph. Chance of precipitation is 100%. New rainfall amounts between 1 and 2 inches possible.

Friday Showers likely, mainly before 10 am. Cloudy, with a temperature falling to around 44 by 5 pm. Northwest wind 10 to 15 mph, with gusts as high as 20 mph. Chance of precipitation is 60%. New precipitation amounts between a tenth and quarter of an inch possible.

Saturday Night Mostly clear, with a low around 29.

Sunday Sunny, with a high near 47.

Sunday Night Partly cloudy, with a low around 32.

Monday Partly sunny, with a high near 49.

Monday Night Partly cloudy, with a low around 31.

Tuesday Mostly sunny, with a high near 50.

Tuesday Night Mostly clear, with a low around 30.

Wednesday Sunny, with a high near 54.

Wednesday Night Mostly clear, with a low around 32.

Thursday Sunny, with a high near 54.

Flood watch in effect for north Georgia through Wednesday evening