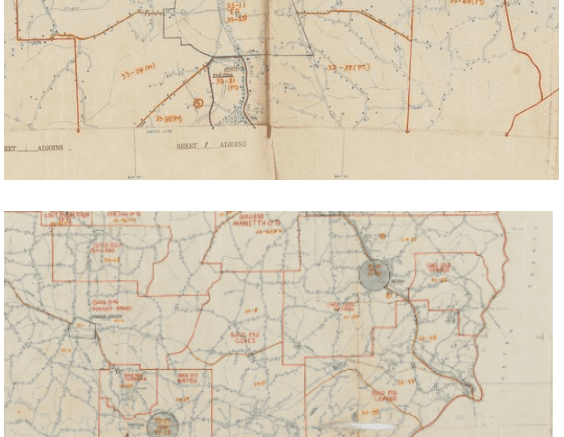 Here’s a guide to using the recently released 1950 individual census records for Marietta, Georgia. These records are useful in both genealogy and historical research, in determining where individuals lived in 1950, and who they were living with.

This article just considers the City of Marietta and immediately surrounding communities, not all areas with Marietta addresses. We’ll cover East Cobb in a later article.

In a previous Cobb by the Numbers we looked at the release of the complete individual records for the 1950 decennial census. By federal law detailed census records for individual households can’t be released until 72 years after the census. The detailed records are the handwritten standardized forms familiar to genealogists and historians.

Now we’re focused on how to get at the records for each part of the county. This article is mostly intended to give readers a means of looking further into what Marietta looked like at the time of that census, rather than to give an in-depth statistical or demographic analysis of the area.

Here’s an image of two sections of the 1950 census map that includes Marietta in 1950 and also the census enumeration districts for the areas that are now part of Marietta after 72 years of annexations (I’ll show you how to get to an interactive version of the map later in the article):

Marietta, like the city today, was the largest city in the county in 1950, so to do a thorough search through the records you need to look at enumeration districts 11 through 29. The interactive maps can narrow it down if you know approximately where the person or family you are looking for lived in 1950.

An explanation for how to get to those enumeration districts is reprinted below from our earlier article.

How to get to the 1950 census records

To get to the records you can go to the search page at the National Archives by following this link, then hitting the “Begin Search” button and on the left-hand panel selecting “Georgia” and “Cobb County” under the state and county pull-down.

Or more quickly, you can go there via this link to the search that I’ve already done.

Cobb was divided into 67 enumeration districts in 1950, so you’ll be presented with a screen that looks like this:

At this point unless you’re familiar with historical geographies like the militia districts, you might have to muddle around a little to find the area you’re looking for, so clicking on the button marked “ED Maps” will give you an interactive map that is helpful in finding what you are looking for.

But for a simple example, let’s imagine I’m doing research on the Clarkdale thread mill district near Austell. I scrolled down to it, clicked on “Population schedules,” and came to this screen:

You can also get to a map of the enumeration district to make certain that if you’re searching for an individual you aren’t outside the boundaries of where that person lived.

You’ll have to use your mouse or key commands to pan around on the map and zoom in or out, but here’s what I got for the Clarkdale area.

Finding the records is just a first step. The Census Bureau is getting volunteers to transcribe the records for different areas so that the records are searchable and more easily readable. To learn how to help with this project follow this link.

Also, the Cobb Public Library is in the process of digitizing their collection of city directories, including the Marietta directories. When that is done matching census records against addresses and the owners of area businesses in city directories, which are arranged in sections for both name and street, could create a further picture of Marietta as it existed in 1950.

50th anniversary of the C-5

 Kennesaw GA in the 1950 census: How to get at and start using the recently released individual records