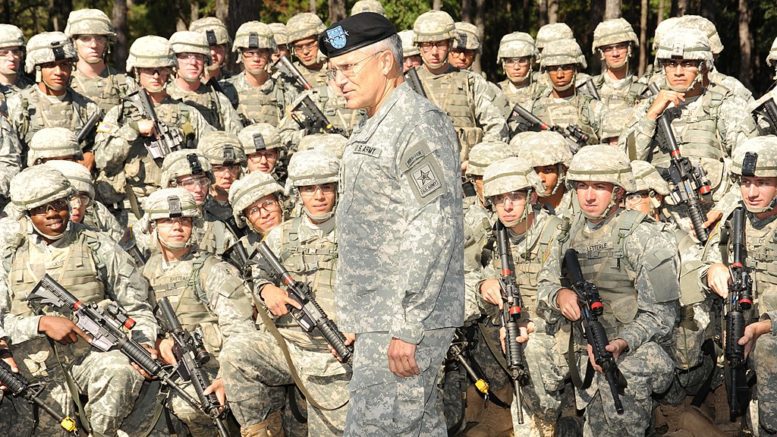 WASHINGTON — The group in charge of renaming military installations that have continued to honor Confederates released its recommendations for nine bases on Tuesday.

The Naming Commission, created by Congress in a defense authorization bill, is set to give its final report to the U.S. House and Senate Armed Services committees before Oct. 1, though its recommendations this week show where changes are likely to occur.

The group, made up of eight individuals including retired military officers, proposed changing the names of three Virginia installations, two Georgia bases, and one facility each in Alabama, Louisiana, North Carolina and Texas.

​​”This was an exhaustive process that entailed hundreds of hours of research, community engagement and internal deliberations,” retired Navy Adm. Michelle Howard, chair of the Naming Commission, said in a statement.

“This recommendation list includes American heroes whose stories deserve to be told and remembered; people who fought and sacrificed greatly on behalf of our nation.”

Hal Moore had a 32-year career in the U.S. Army that spanned from 1945 to 1977, including deployments in Japan, Korea, Norway and Vietnam.

During the Vietnam War, while he was deployed, Julia worked to change the way the U.S. military handled death notifications, which at the time were delivered by cabbies carrying a telegram.

“Her complaints to the Pentagon led to the creation of casualty notification teams (as well as survivor support networks) that still carry out this difficult task today,” the commission writes.

Eisenhower, who began his education at West Point in 1911, would go on to become the Supreme Commander of Allied Expeditionary Forces throughout Europe during World War II. He was also the first Supreme Allied Commander Europe for NATO before he was elected as U.S. president in 1952 and re-elected in 1956.

In North Carolina, Fort Bragg would be renamed Fort Liberty. The commission wrote: “At the greatest moments of its history, the United States Army and its soldiers have earned our nation’s liberty, secured it for all Americans, and expanded it internationally.”

Louisiana’s Fort Polk would be renamed Fort Johnson after Sgt. William Henry Johnson, a Black soldier who enlisted in the segregated military and during World War I became “the United States’ first hero of the Great War, immediately receiving the French Croix de Guerre for his actions.”

“Upon returning to Jim Crow America, he was not awarded equal benefits as white soldiers,” the commission writes. “Unable to effectively work as a result of his wounds and lacking appropriate treatment for them, he died destitute in 1929. Though buried with military honors in Arlington National Cemetery, he faded from major memory for most of a century. Indeed, even his resting place was unknown for most of that time.”

Johnson was posthumously awarded the Purple Heart in 1996 and the Distinguished Service Cross in 2002.

In Texas, Fort Hood would be named Fort Cavazos for Gen. Richard Cavazos, who enrolled in the ROTC program at Texas Technical University and was commissioned into the Army right after graduation in 1951.

His actions during the Korean and Vietnam wars would earn him the Distinguished Service Cross, two Legions of Merit, a Silver Star, five Bronze Stars, the Purple Heart, and many other medals.

“In 1982, he became the first Hispanic-American to pin on four stars,” the commission wrote.

Novosel served in World War II in the Army Air Corps, in Korea in the Air Force and in Vietnam as an Army warrant officer and helicopter pilot.

“Assigned to Vietnam as a ‘Dustoff’ pilot, he flew helicopters evacuating combat zone casualties; a dangerous mission in which approximately one third of all medevac pilots became casualties themselves,” the commission wrote. “In Novosel’s two tours in Vietnam, he flew 2,543 extraction missions, rescuing over 5,500 seriously wounded soldiers.”

Walker became the first female surgeon in Army history in 1863 and received the Medal of Honor in 1865.

The Commission wrote that “proud of her service and committed to the causes of equality for which she served, Mary Walker continued to wear the medal everyday thereafter, including through five decades of campaigning for women’s equality and women’s rights.”

Adams joined the Women’s Army Auxiliary Corps in 1942 before being selected to command the first unit of Black women to serve overseas in 1944.

“Gender discrimination limited her promotion to lieutenant colonel, the highest rank attainable by any woman during the war. But her effectiveness was made clear when it took three units of men to replace her battalion after they disbanded,” the commission wrote.

Gregg, who would share the base name with Adams, enlisted in the Army in 1945 and was a soldier in 1948 when Truman ordered the armed forces to desegregate. “Gregg did so with great skill, leading by example and embarking on a career of excellence,” the commission wrote.

Barfoot enlisted in the Army in 1940, later receiving the Medal of Honor for his actions in May 1944 in Italy while fighting Nazi German soldiers. He would stay in the military for 34 years, including tours in Korea and Vietnam.

Secretary of Defense Lloyd J. Austin III said in a statement Tuesday that he’s pleased to see the Naming Commission making progress and that he looks forward to seeing the completed report later this year.