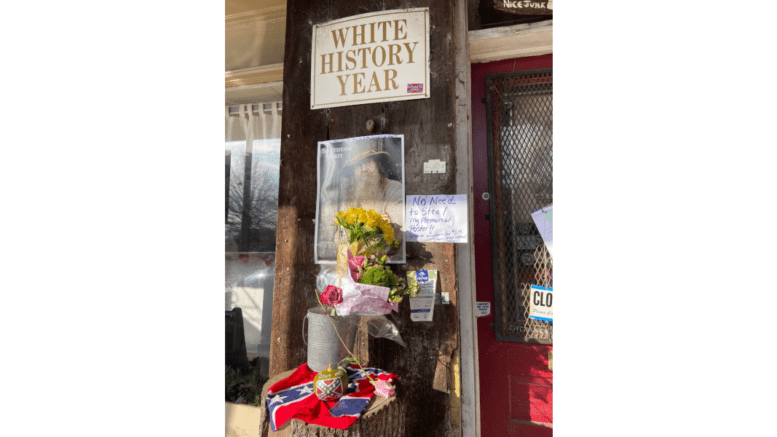 We are aware of the resignation of councilmember James “Doc” Eaton. We thank him for his many years of service to the City of Kennesaw and we wish him well in his future endeavors.

Cris Eaton-Welsh, his daughter and also a former council member, announced she will sell her Main Street building and relocate her chiropractic practice to unincorporated Cobb County.

Dent Myers opened Wildman’s in 1971. It became infamous for its display of a Ku Klux Klan robe, racist collectibles, prominently displayed Confederate flag, and storefront signs such as the one that says “White History Year.”

The store has also drawn protestors. In June 2020, during one such protest, Marjorie Lyon, an employee and friend of Myers, called the protesters hypocrites.

“That is selfish, stupidity in my opinion. They are publicly embarrassing themselves. This is all for glory and to have their five minutes of fame. If you focus on oppression or negativity that’s all you’re ever gonna see,” she said in 2020.

Myers died in January at age 90. Some thought that would be the end of the debate. Then Lyon was granted a business license by the city and reopened the controversial shop Tuesday.

“Today my father Doc Eaton resigned his City of Kennesaw Government seat in response to the city granting a new business license to the new owner of Wildmans Civil War Shop after the Cobb County Government Fire Marshall administratively approved the CO for a building that hasn’t been inspected in DECADES…That is not what any of any other Kennesaw. business and especially Downtown Kennesaw Merchants are put through when we opened our businesses or changed ownership in our spaces…”

She later posted the following statement and request for residents to attend the June 20 city council meeting:

I was wrong. I owe this community an apology. My office has been on the pin corner of downtown Kennesaw and I have been complicit in turning a blind eye for 20+ years. I was hoping someone else would handle the issue. I thought I could just wait it out.

Today, a new business license was issued here in the city of Kennesaw that will allow a fresh face to carry on the bigotry and hate that is housed one block from my office. I have been a hypocrite and the time for diplomacy has passed.

I have stood on the corner for the last 20+ years preaching love, understanding, inclusion, empathy and community AND I have done nothing to stand up with and for others from the vitriol being disseminated across the street. My 20 years of defending the city of Kennesaw’s complacency has come to an end.

Today at 11am Wildman’s Civil War Shop was reopened with a new owner and a new business license issued by the city.

Desmond Tutu once said “if you remain neutral in situations of injustice, you’ve chosen the side of the oppressor. “

On this final act of cowardice by the city I will not remain silent or neutral.

I will lay down the mantle and move on to a place that is in congruence with my heart. I want for a community that I am proud of.

This does not sit well with my soul. I can no longer wait and hope that someone else will have the strength and leadership to say “no more”.

Today, I have listed my building for sale and I am actively pursuing a new commercial building outside of the city limits to house my chiropractic office. I will use the time during my recovery from surgery to find a new location by year‘s end.

I hope you will join me on Monday, June 20th in the City Council Chambers at 6pm to address our city leaders and staff.

Our families, our children and our community deserve better.

The Courier reached out to the city for comment but had not received a response as of publication.

Freedom of speech is under attack in public schools, U.S. House panel told